University to return bronze sculpture looted from Nigeria in 1897

The bronze sculpture, depicting the head of a king, was looted by British forces during the destruction of Benin CIty. 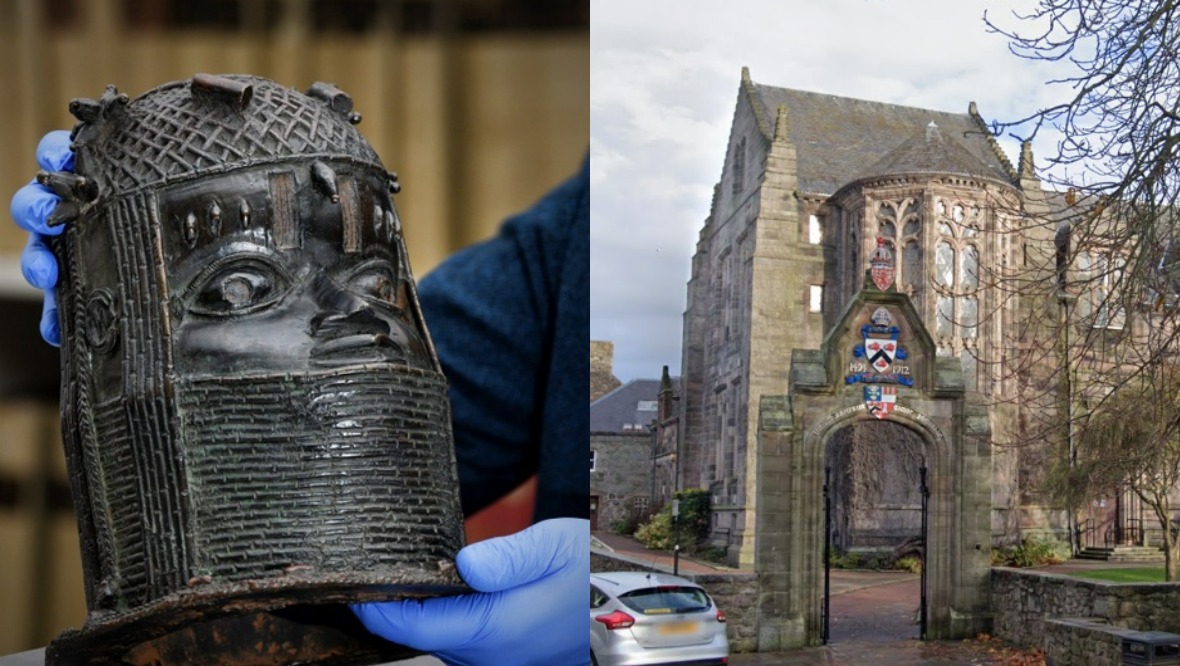 A Scottish university will return a bronze sculpture looted from Benin in Nigeria more than 120 years ago.

The University of Aberdeen will complete the handover of the Benin Bronze at a ceremony on Thursday.

Prince Aghatise Erediauwa, the younger brother of the current Benin monarch, will be there to receive the statue, which depicts the head of an oba (king), along with Chief Charles Uwensuyi-Edosomwan, the Obasuyi of Benin and director of the National Commission for Museums and Monuments.

They will be accompanied by Prince Isa Bayero, a prince of the Kano Emirates; the deputy high commissioner to Nigeria in the UK, and Mrs Edith Ekunke, retired director of the National Museum, Lagos.

The university became the first institution to agree to the full repatriation from a museum of a Benin Bronze in March and will hand back the bronze this week, as will Jesus College Cambridge.

The sculpture is one of thousands of religious and cultural artefacts looted by British forces in 1897 during the destruction of Benin City in present-day Nigeria by a British military expedition.

It was purchased by the University of Aberdeen at an auction in 1957.

A recent review of collections included research into its provenance confirming that it was one of the so-called ‘bronzes’, acquired in “immoral circumstances” during the Benin Punitive Expedition in which the royal palace of the oba was burned and looted.

As a result, the university instigated a conversation through Professor Bankole Sodipo, professor of law at Babcock University, Nigeria, with the National Commission for Museums and Monuments of Nigeria, the Edo State Government and the Royal Court of the Oba, regarding its return.

The process of a legal transfer then began with the university working to support the timescales identified by the Nigerian partners for its physical return.

Oba of Benin, Omo N’Oba N’Edo Uku Akpolokpolo, Ewuare II, said: “Much has been said about the significance of heritage art and, in spite of the occasional attempts in some quarters to downplay their cultural and religious relevance, these works are often imbued with the spirit of the people from whom they were taken.

“Regardless of the resistance in some quarters, the return of stolen art is the right thing to do.

“Some say that they acquired their own collections. This is like saying, well, I know this item was originally stolen but because I bought it somewhere, then I’m okay. That notion is completely wrong and unfortunate.

“In any event, we thank the University of Aberdeen for this noble act of returning our bronze work.

Professor George Boyne, Principal and Vice-Chancellor of the University of Aberdeen, said: “Over the last 40 years the Benin Bronzes have become important symbols of injustice.

“It would not have been right to have retained an item of such great cultural significance that was acquired in such reprehensible circumstances.

“The university took a proactive approach to identify the appropriate people to discuss what to do and we are extremely grateful for the collective approach taken by the partners in Nigeria, which has facilitated this return.

“We are delighted to welcome our guests representing the Federal Republic of Nigeria, the Kingdom of Benin, and the National Commission for Museums and Monuments and commend their spirit of cooperation in making this possible.”

The partners have committed to the safe-keeping of the bronze ‘in such a manner and in true essence of its sovereignty’, until it can be put on public display at the oba’s palace or other agreed place.