Investigators said the train had reached nearly 73mph before it struck a landslip. 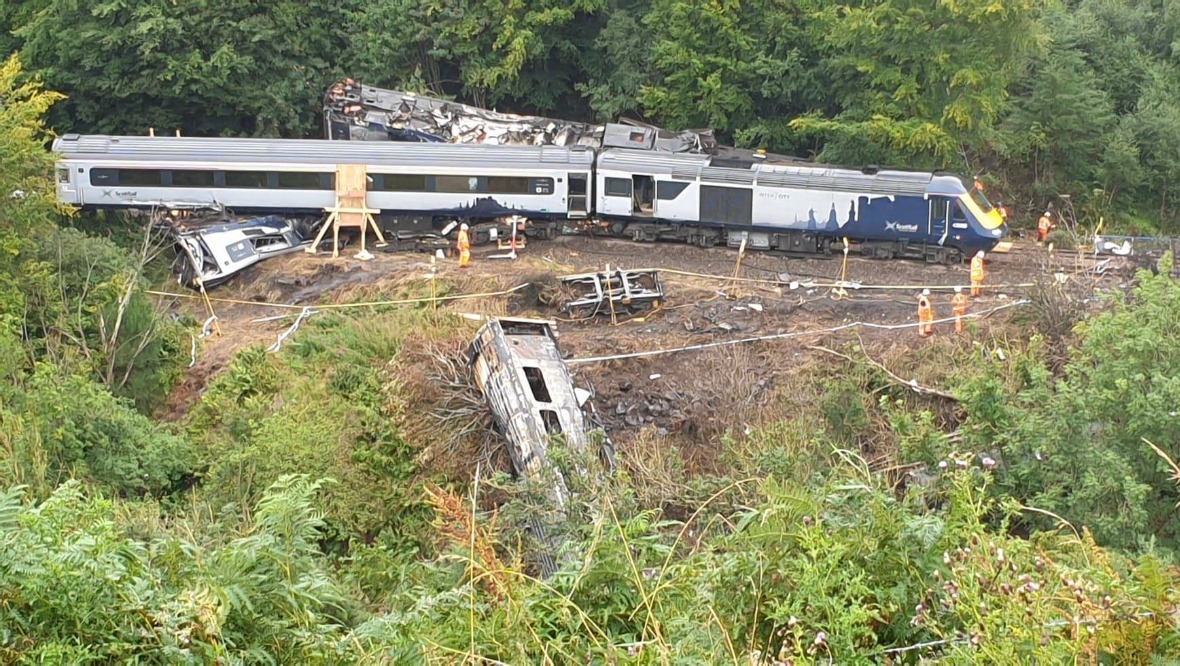 The train which derailed near Stonehaven – killing three people – was travelling close to the 75mph speed limit just before it hit a landslip.

In a report on Friday, the Rail Accident Investigation Branch (RAIB) said the train was moving at 72.8mph shortly before the crash.

Investigators remain at the site of the crash, north-east of Carmont in Aberdeenshire.

New pictures show the wreckage seemingly undisturbed, with more police tape and lights in place to aid the examination of the area.

Workers were trying to clear areas around the site to help in the physical inspection of the site.

The location around 1.4 miles north-east of Carmont is currently under investigation by the RAIB.

British Transport Police, Police Scotland and the Office of Rail and Road are also carrying out a joint investigation.

Network Rail has a supporting presence at the site, carrying out some work to help stabilise elements of the site.

Initial findings from RAIB said nine people were on board the train at the time.

The train was returning to Stonehaven after it became clear it could not reach Glasgow due to another landslip further down the line.

After travelling around 1.4 miles, it hit a landslip covering the track before derailing.

As the track curved to the right, the train continued in “a roughly straight line” for approximately 77 yards, until it struck a section of bridge parapet.

The leading power car continued most of the way over the bridge, the investigation found, and then fell down a wooded embankment, as did the third passenger carriage.

The first passenger carriage ended up on its roof, as did the second which came to rest on the first.

The fourth passenger carriage remained upright and attached to the rear power car. It also came to rest on the first carriage.

All the wheels on the rear power car derailed but it remained upright, the RAIB said.

A minute’s silence took place in memory of the victims on Wednesday, observed in stations across the United Kingdom.

A wreath was laid at Aberdeen station while First Minister Nicola Sturgeon attended the silence at Edinburgh Waverley station.

Alex Hynes, managing director of Scotland’s Railway, said: “Our hearts remain broken and will do for a long time.

“We hope that by coming together as a railway family, along with the local community and people across the country, we can support one another through this horrendous time.

“The strength of support and offers of help from railway colleagues across the rest of Britain has been a real source of comfort.”