Six other people injured after the train came off the tracks in Aberdeenshire. 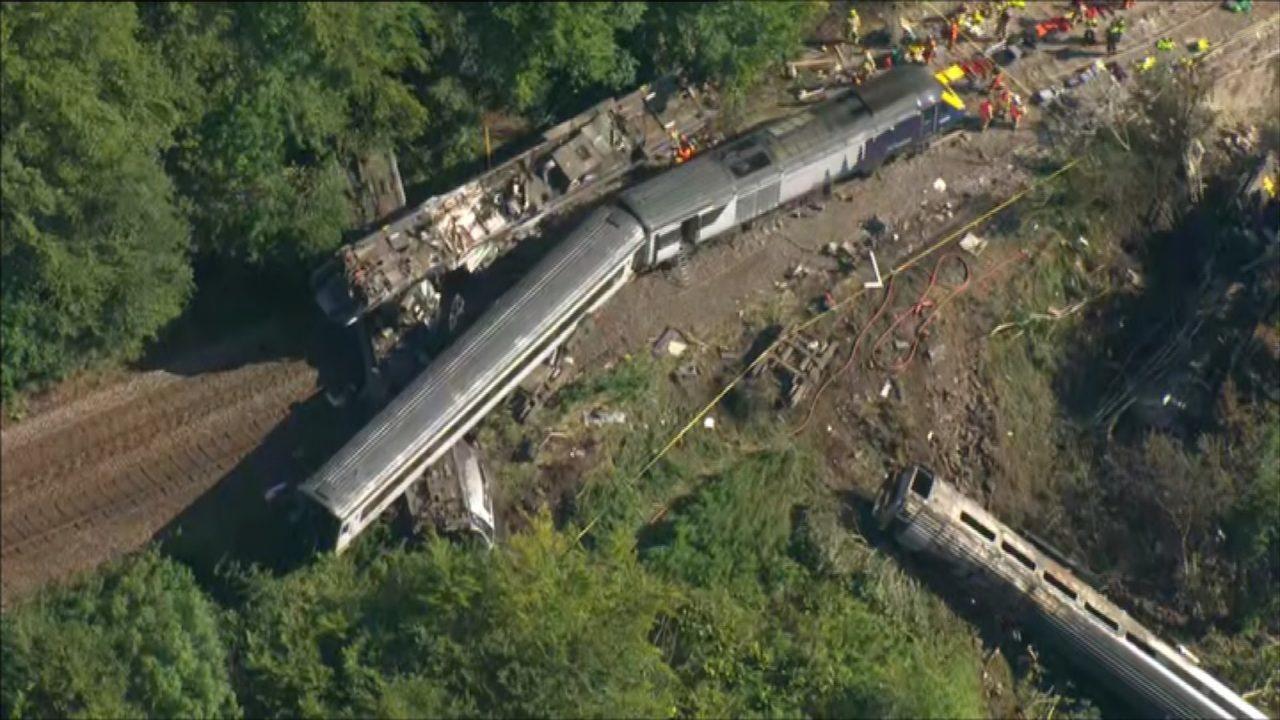 Three people have died after a commuter train derailed in Aberdeenshire.

Both the driver and conductor of the ScotRail service were killed in the crash, along with one passenger.

Six other people were taken to hospital with minor injuries after the train came off the tracks in an area hit by heavy flooding.

Police believe everyone onboard the train is accounted for, but warned that a full search of the area would take some time.

The Wednesday morning crash sent plumes of smoke into the sky that could be seen for miles and prompted a massive emergency response.

The derailed five-carriage train, which left Aberdeen at 6.38am on its way to Glasgow, left the tracks near 10am close to Stonehaven.

ScotRail turned its logo black across its social media feeds as a mark of respect to those who lost their lives.

The operator said: “British Transport Police has sadly confirmed three fatalities, including our own ScotRail driver, and multiple other injuries.

“Our thoughts are with those who have been affected by this tragic event.

“The railway in Scotland is often referred to as a family, and it’s one that is hurting today.”

An investigation involving police and rail operators is under way to establish the cause of the incident.

It’s thought flooding may have been a contributing factor after Network Rail earlier warned of landslips in the area.

Chief Superintendent Eddie Wylie, from British Transport Police, said: “This is a tragic incident and first and foremost our thoughts are with the families and friends of those who have very sadly died this morning.

“We remain on scene alongside our emergency service colleagues, and a major incident operation has been under way.

“I would like to reassure the public that this was not a busy service, and from CCTV enquiries and witness statements we believe all passengers have been accounted for.

“However, once the area has been made safe then a full and thorough search will be conducted, which is likely to take some time.”

Normally a train with five carriages could carry upwards of 1300 people, but social distancing measures brought on by the pandemic has cut that number significantly.

A centre was set up in Aberdeen for friends and families to get more information on anyone who was on the train, but hasn’t been heard from since the derailment.

NHS Grampian set itself up at Midstocket Church in Aberdeen, saying it would “provide help and support and a direct link with the emergency department at Aberdeen Royal Infirmary.”

It discouraged anyone from heading straight to the hospital looking for anyone.

“My deepest condolences are with the loved ones of those who lost their lives in this tragic incident,” the First Minister Nicola Sturgeon said.

Local MP Andrew Bowie said the River Carron burst its banks and caused flooding in Stonehaven, but added the water receded quickly as the stormed slowed.

The Queen also sent a message of condolence on behalf of her and her family, saying: “It was with great sadness that I heard of the train derailment earlier today in Stonehaven, Aberdeenshire.

“The Duke of Edinburgh, and the entire Royal Family, join me in sending our thoughts and prayers to the families of those who have died and those who have been injured.

“Our thanks go out to the emergency services for their response and dedication.”

And RMT senior assistant general secretary Mick Lynch said: “The confirmation that there have been three fatalities in the Stonehaven derailment, including the driver and one of our conductor members, is the most dreadful news and this trade union’s thoughts are with the families, colleagues and friends of those who have lost their lives in this tragedy.

“RMT will unite to provide support, assistance and solidarity at this distressing time. Safety on the railway has to be an absolute priority and this union will be working with the various agencies to establish the facts behind this disaster which has sent shock waves right throughout our industry.”