Engineers have been working to restore power. 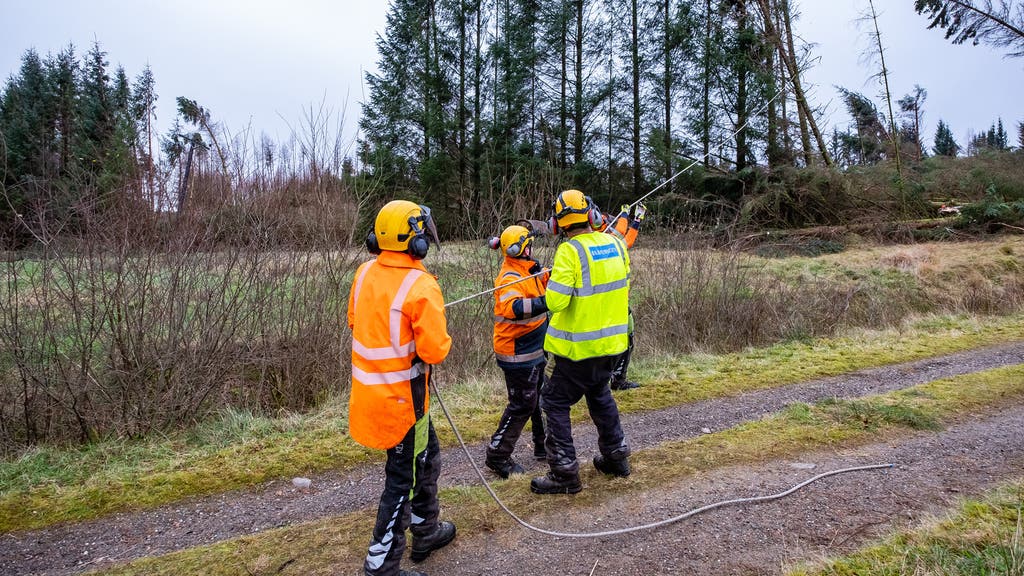 Some homes left without power following the “catastrophic damage” caused by Storm Arwen last week may not be reconnected until Friday, an electricity company has said.

Scottish and Southern Electricity Networks (SSEN) has reconnected more than 120,000 customers since Friday’s storm, but 6500 remained without power on Wednesday.

Graeme Keddie, of SSEN, said the main villages have been reconnected but that for “localised faults” power is not expected to be restored until Friday.

He apologised to any customers affected and said the company is doing all it can to restore power “as quickly as possible”.

Mr Keddie said the storm had caused “devastation on parts of the network”, particularly in Aberdeenshire, where 4000 customers remain without power.

He told BBC Good Morning Scotland: “It’s a dynamic situation, we’ve got a better picture than we had yesterday and the day before.

“We’ve got all of the main villages connected; it’s now looking at the rural areas. We’re confident that we have a handle on the situation in terms of what we can restore in the next couple of days.

“We’re looking to make really good progress today and tomorrow and we expect it will be the last final few homes on Friday, and we want to be clear those are our expectations.”

He added: “For those localised faults, those faults that are serving a home or a group of homes, we are looking into Friday for restoration.”

SSEN said it will reimburse all reasonable accommodation costs for any customer unable to make alternative arrangements.

Customers unable to access the company’s welfare facilities for free hot food and drinks can also claim the cost of takeaways or meals from local establishments, up to £15 per person.

SSEN managing director Chris Burchell said: “The impact of Storm Arwen has caused catastrophic damage to the electricity network across the north-east of Scotland and is the most significant event we have ever had to deal with in the area in a generation.

“I would like to thank our customers who have shown great resilience, patience and understanding since the impact of Storm Arwen, and we fully recognise that urgency of the situation for those who continue to remain off supply.

“I would like to personally apologise to all customers who have been impacted and would like to reassure everyone still off supply that our teams are working extremely hard to reconnect them as soon as possible.”