The former Manchester United forward and Scotland's only ever Ballon D'or winner remains the national team's top goal scorer of all time. 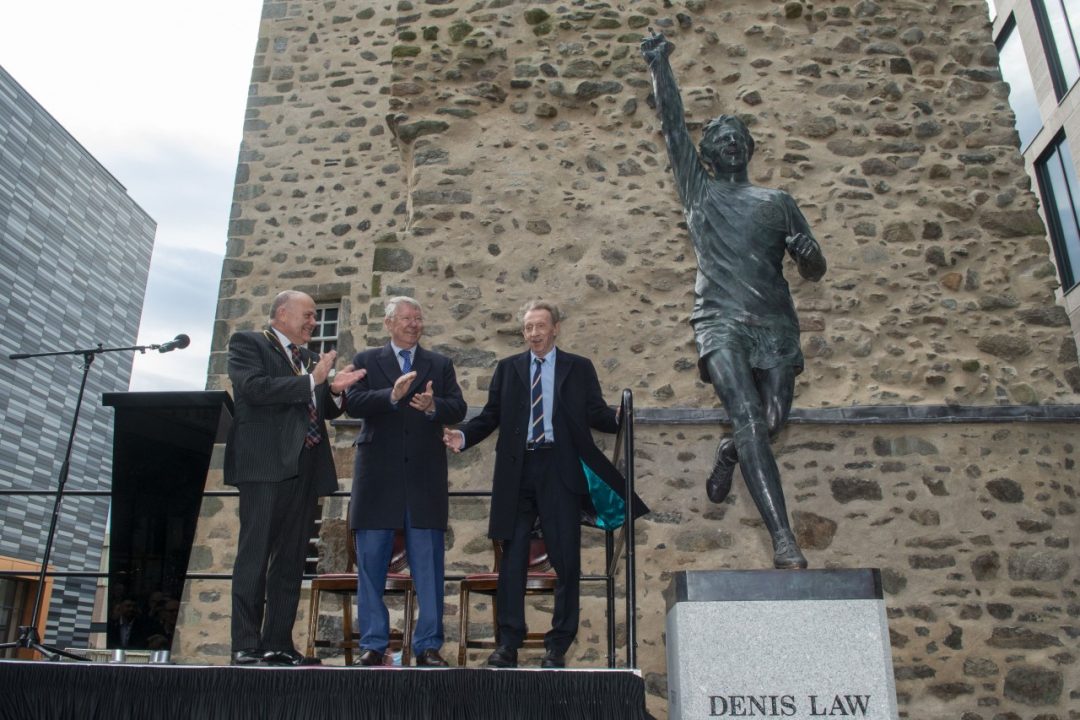 Scottish football legend Denis Law has been honoured with a statue in his hometown of Aberdeen.

The former Manchester United forward and Scotland’s only ever Ballon D’or winner remains the national team’s joint-top goal scorer of all time with 30 goals in 55 caps.

The bronze statue was unveiled on Thursday with the help of legendary former Aberdeen, Scotland and Man Utd manager Alex Ferguson.

The ceremony also included a welcome from the Lord Provost of Aberdeen Barney Crockett, followed by a few words by the man himself.

Speaking at the event, Law said: “I have to again express how humbled I am that this statue has been unveiled in my beloved Aberdeen.

“The city and people of Aberdeen have always meant so much to me and this truly a great honour.

“To be joined by so many of my family and friends, including Sir Alex, just makes it all the more special.”

The 4.7m high statue is sited at the gable end of Provost Skene’s House (PSH), which recently re-opened as a new visitor attraction after the city council’s £3.8m renovation.

It was sculpted by Alan Herriot, who was also commissioned by the council to create the statue of King Robert the Bruce outside nearby Marischal College.

Despite never playing his club football in Scotland, Law made his impact at Old Trafford and short spells at Huddersfield, Manchester City and Torino in Italy.

His 30 international goals remains a Scottish record that has only been matched by Celtic and Liverpool legend Kenny Dalglish who scored the same amount but in almost double the amount of games.

The now 81-year-old was named the European Footballer of the Year after scoring 46 goals in the 1963/64 season.

He remains the only Scot to ever win the prestigious award in its near 70-year history.

Law also lifted the European Cup and two league titles during his eleven year spell at Manchester United where he scored 237 goals in 400 games and was part of the club’s famed “holy trinity” alongside George Best and Bobby Charlton.

In August it was revealed that he had been diagnosed with dementia.

At the statue unveiling on Thursday the city’s lord provost said: “The people of Aberdeen hold Denis Law very close to their hearts and this statue represents appreciation of a local lad done good.

“Denis is a remarkable man, not only for his outstanding achievements on the football pitch for clubs and country, but for the fantastic charity work he has done over the decades especially through the Denis Law Legacy Trust.

“Located in the heart of the city centre I am sure thousands of people – young and older – will come and take a photo alongside this magnificent statue of The Legend that is Denis Law.

“I would also like to thank Sir Alex Ferguson for joining us at the unveiling to show his appreciation and support for his great friend Denis Law.”