Around 60 dogs were rescued from a Moray property after an operation involving the Scottish SPCA, police, and council. 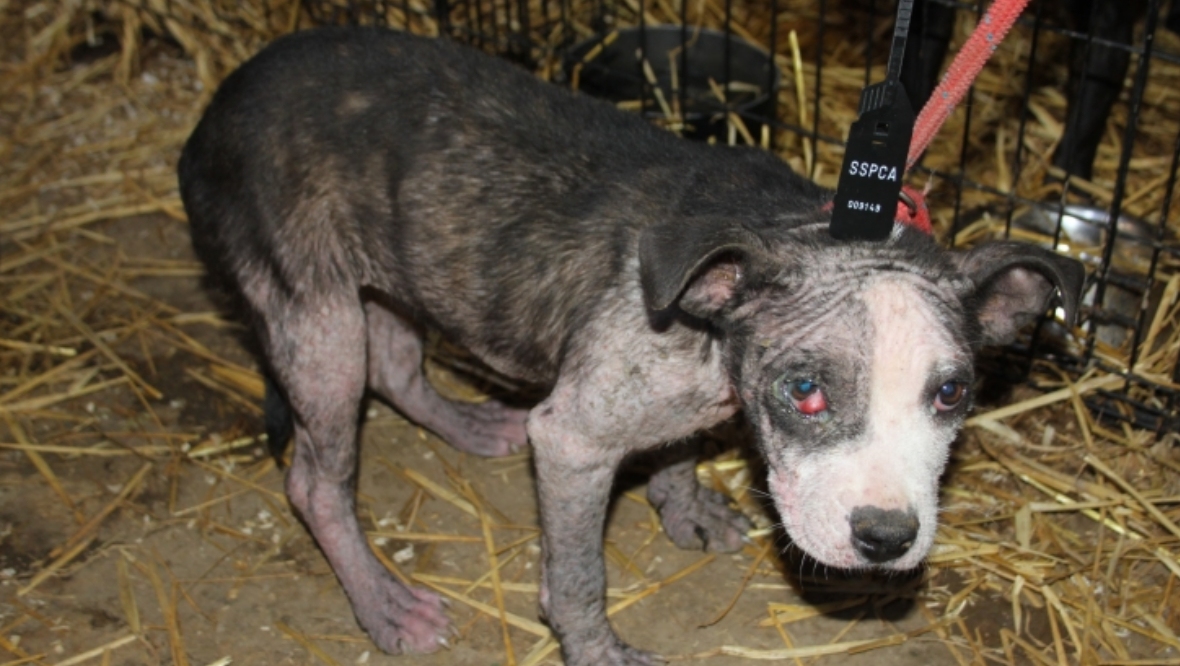 Warning: This report contains images some readers may find distressing.

A father and son have been handed a ban and a community service order after a raid on an illegal puppy farm in Moray.

At Elgin Sheriff Court on Thursday, Samuel Ronald Hessin, 49, and Samuel Arthur Hessin, 22, were banned from owning dogs for ten years and ordered to serve 300 hours of community service after admitting to animal welfare offences.

It came after 60 dogs and puppies were rescued from a property in the Keith area in 2019 following a joint operation involving the Scottish SPCA, Police Scotland and Moray Council.

Rescue officers discovered the animals living in small crates in unhygienic conditions, with many suffering from diseases, including skin conditions and eye infections.

A number of the dogs, made up from a mixture of breeds including Staffordshire bull terriers and labradors, were visibly coughing and passing bloody faecal matter.

Both men will also be under supervision for 18 months.

Procurator fiscal Andy Shanks said: “This was a case of widespread and indiscriminate neglect where dogs and puppies were caused suffering and pain by Samuel Ronald Hessin and Samuel Arthur Hessin.

“I would like to thank the Scottish SPCA, Moray Trading Standards and Police Scotland for their part in investigating and gathering evidence of these offences.

“We expect the highest standards of commercial dog breeders and are committed to working with enforcing authorities to ensure that those who do not meet these standards are held to account.”

SPCA officers have now been left with 78 dogs in their care, after two of the canines rescued were discovered to be pregnant – with one of the animals giving birth before passing away.

A special investigations unit inspector involved in the case said: “These dogs were kept in horrendous conditions which were ripe for causing horrific disease and suffering.

“After we seized them, vets found many were suffering from a host of skin, eye and respiratory diseases. Many dogs were carrying wounds consistent with kennel fights and we are in no doubt this was due to the stress caused by the conditions these poor animals were kept in.

“The stench of urine, lack of proper bedding and the amount of faeces on the floors and even in amongst what small amount of food was out, clearly showed there was no regard for the welfare of these dogs.

“All of this, combined with the lack of ventilation, meant disease spread with ease among these poor animals. This site was clearly a low-welfare puppy farm.

“Two of the female dogs were pregnant when they came in to our care. Sadly, the birth was just too much for one of them and she passed away during labour. We believe she had been badly overbred and it was her third litter in just one year.

“Thankfully, due to the care and dedication of our animal care teams we were able to successfully rehabilitate the remaining dogs and find them loving homes.”

Scottish SPCA chief superintendent Mike Flynn added: “Securing a conviction is a great result, but we believe anyone convicted of running a puppy farm should get a life ban on owning animals.

“Individuals prepared to put profit before welfare to an extent that dogs get seriously ill should not be allowed to keep animals.”