Roads blocked and police attacked by fireworks during Dundee disorder

Firefighters were dispatched after a group of youths went on a rampage in the Kirkton area of Dundee on Monday evening. 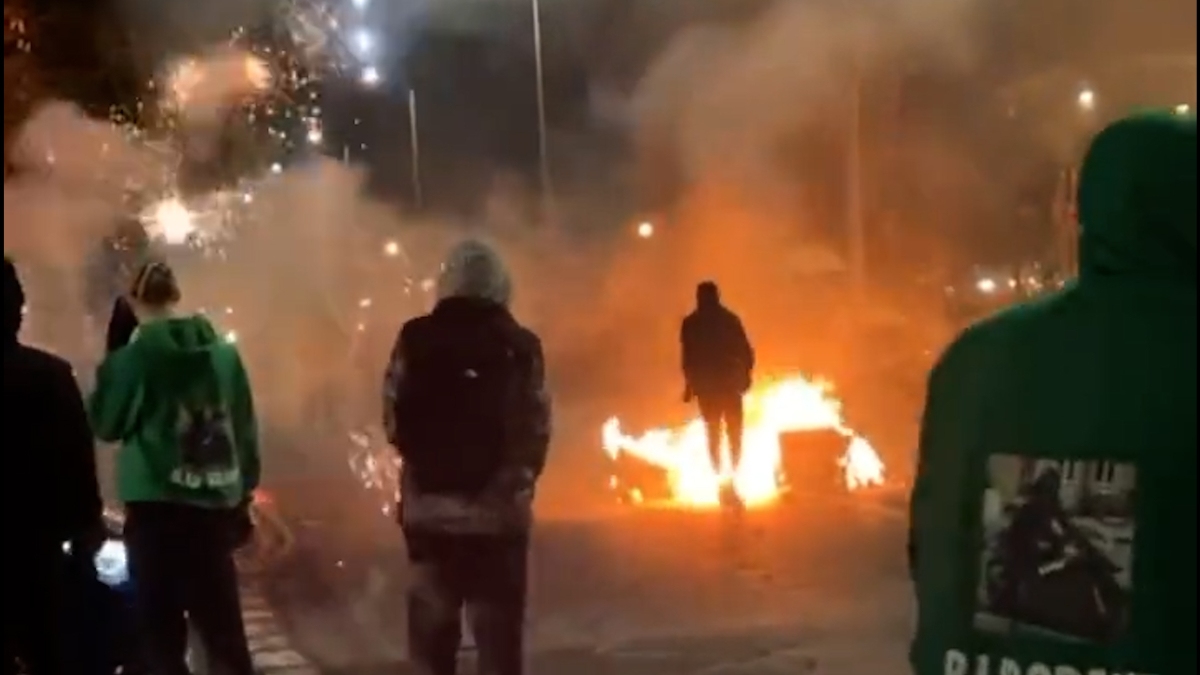 Police were targeted with fireworks while several roads were blocked by a series of deliberate blazes on a night of disorder in Dundee.

The leader of Dundee City Council branded the scenes “absolutely disgusting” and “like something from a war-torn nation”.

The Scottish Fire and Rescue Service confirmed they were called to an incident on Beauly Square in the city’s Kirkton area at around 5.30pm on Monday and police revealed one officer suffered a minor injury.

Videos from nearby Keswick Terrace, Balgowan Avenue and a number of other streets circling on social media show flames raging and burnt-out debris by the roadside.

The windows of a nearby school were shattered and bricks were hurled at passing vehicles as emergency services responded to the incident.

Drivers were forced to turn back from the fires and a Police Scotland helicopter circled above the area with a searchlight scanning the streets below.

Police slammed the scenes, and confirmed they were looking to identify all those involved.

Chief Superintendent Phil Davison said: “There is no justification for the behaviour and disorder which was seen in the Kirkton area of Dundee last night.

“Enquiries are ongoing to identify everyone involved.

“Throwing fireworks and other items towards emergency services is reckless and dangerous. No one should go to work and expect to be attacked.

“One officer suffered a minor injury and damage was caused to a school and a number of vehicles.

“I would like to reassure the public of Dundee that we remain committed to keeping them safe as we understand last night’s behaviour must have been really distressing for residents in the areas.

“We have a range of highly-trained public order officers available to policing commanders across Scotland to enhance resources and deal with any issues that arise. Officers will be patrolling the local areas to provide public reassurance.

“I would appeal to anyone who knows who was involved in the disorder, or has any information from last night, to contact Police Scotland on 101.”

John Alexander, leader of Dundee City Council, said in a Facebook: “This isn’t just a wee bonfire. Blocking roads with bins ablaze, smashing up cars and damaging our schools are scenes that you’d expect in an action movie or war-torn nation.

“I’m shocked but more than that, I’m angry. This reckless behaviour endangers lives, with emergency vehicles unable to pass on Balgowan Avenue and it costs residents and every taxpayer money.

“I hope that every single one of those individuals responsible is identified and dealt with appropriately. Given the age of many of those in the videos and images (I guess), I expect that parents will be equally as outraged and questioning their children, if they knew they were out in that area tonight.

“Where were your kids tonight? Please ask them.”

He said: “The perpetrators are extremely lucky that no-one appears to have been hurt. With it having been Halloween, several children will have been out in the streets and this could have been a disaster.

“I hope that Police Scotland identify the culprits as quickly as possible and appropriate action is taken. What happened is simply not on. I will be contacting local police about my concerns.

“Public resources are already stretched to their absolute maximum without having to deal with this mindless behaviour”.