Hundreds of 'Santa bags' will be distributed to children in the war-torn country this festive season. 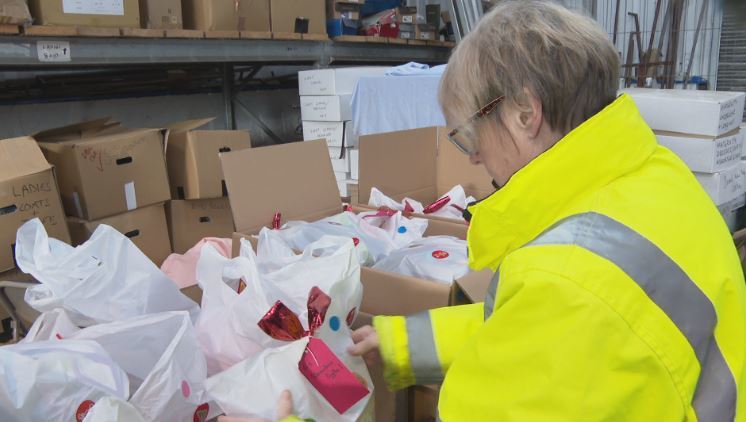 A humanitarian aid charity is preparing to send festive cheer to children still living in war-torn Ukraine in an effort to bolster their spirits.

It’s been more than nine months since Russia invaded the country, sparking a humanitarian crisis.

Tayside and Strathearn Help for Ukraine (TASH4Ukraine) was just one charity set up to help those impacted.

From its base at Errol airfield in Perthshire, volunteers are preparing to send ‘Santa bags’ which will be distributed to children who are homeless, in hospital or have been forced to leave their towns and cities.

Sarah Mackintosh, a volunteer from TASH4Ukraine, said: “Every child is getting stationery, a toy, a cuddly toy, warm hats, scarfs and gloves, some sweeties and chocolate.

From pre-school age to over tens, the team from Tayside and Strathearn Help for Ukraine is aiming to provide at least 500 parcels.

But it’s not just children benefitting from the donations leaving this warehouse.

Since launching in March 2022, the charity has sent 35 lorries to a distribution hub on the Polish/Ukrainian border, totalling more than £1m of aid.

As the conflict enters the cold winter months, clothing and equipment is being shipped to soldiers on the Ukrainian frontline.

Deborah Ovens, from TASH4Ukraine, said: “We’re sending wind-up torches which have radios, and they can charge their phone.

“These are invaluable to them, so we’re doing a big push to raise funds for these and send these out as well as generators, blankets, sleeping bags.

“Heavy, heavy clothing and obviously the food is important. But even the type of food has changed because we need cans [so] they can eat out the cans if they don’t necessarily have power to heat the food up.”

The charity relies on the generosity of others with donations arriving at the depot in Perthshire from across the UK.

As the lorries are sent out, the horrors of the war-torn region make their way back to the volunteers.

One of the helpers, Karen Hamilton, said: “They’ve got nothing. We get sent videos, images through from Ukraine and it’s just horrendous.

“We really can’t appreciate how bad it is when you’re living over here, it’s just dreadful.”