Patients of disgraced doctor protest in demands for inquiry

Professor Sam Eljamel was suspended as head of neurosurgery in 2013 after carrying out countless botched operations. 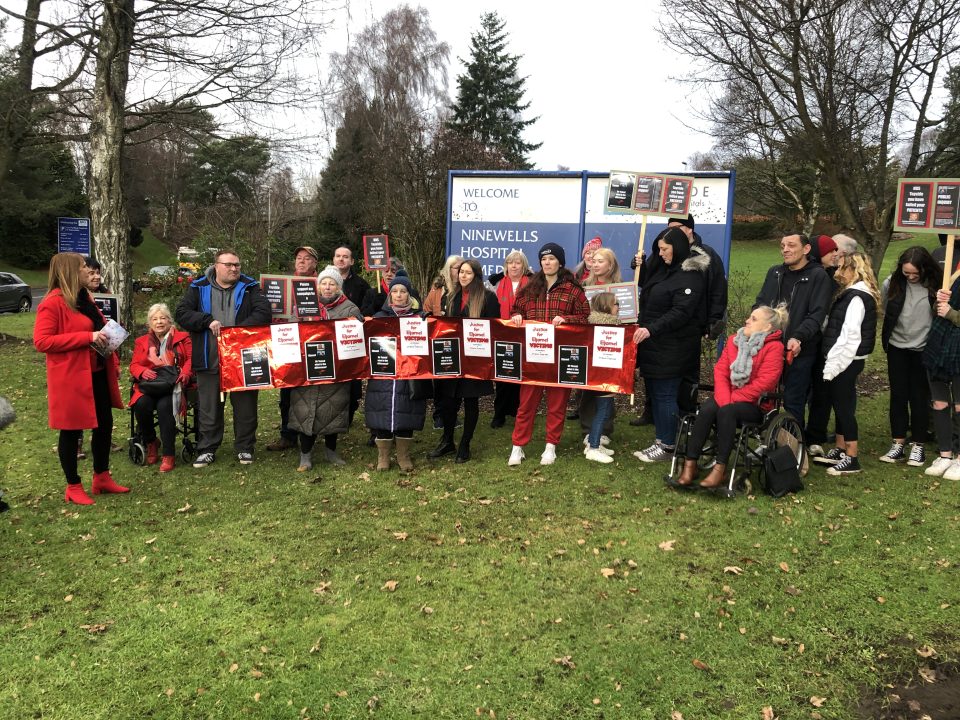 Former patients harmed by a disgraced Dundee doctor have protested outside Ninewells Hospital.

Professor Sam Eljamel was suspended as head of neurosurgery in 2013 after carrying out countless botched operations.

There are now demands for a public inquiry from 40 patients who were left with life-changing injuries.

Some can no longer walk and others are in constant pain.

John Blackwood had a brain tumour and was operated on three times by Eljamel. The former NCR worker was left with only 30% vision in one eye due to damage caused to his optic nerves and was forced to give up work at the age of 46.

“When I woke up from the second operation I was blind in one eye and partially blind in my left eye and I’ve been like that ever since,” said John.

“I hold Ninewells Hospital responsible for employing somebody like this. I mean he was just a bandit and he got away with it under their noses.”

Some patients were too unwell to attend the protest but around 30 people affected by Eljamel’s malpractice gathered outside the hospital.

“He opened me up and closed me back up again and didn’t actually do anything, that’s why I was left in so much pain,” explained Grace Hocking, who is confined to a wheelchair.

“I’ve been paralysed. He operated seven times. I had another four spine operations to try and do something about it but they can’t.”

Maureen Mill added: “My niece has had 20 years of her life being ruined. Her daughters have suffered because of that, her family’s suffered. Every step she takes is agony.”

Eljamel was placed under investigation and under supervision, but was allowed to continue operating on patients.

Jules Rose, from Kinross, was one of them. She was diagnosed with a rare brain tumour but Eljamel removed her tear duct instead.

Jules was the last person to be treated by Eljamel, who was suspended by NHS Tayside the day after her surgery.

Jules is now leading the fight for a public inquiry.

“We want NHS Tayside to be held to account for allowing Professor Eljamel to butcher all these patients,” she said. “NHS Tayside were unaware that this was happening from 1997 to 2013.

Jules has vowed to continue campaigning until a public inquiry is granted.

Fay Pelloie said: “I don’t want to have to think about him all the time. We need closure to move on knowing why this was allowed to happen. He’s in your head all the time and that’s just as bad as the physical injuries.”

Eljamel removed himself from the General Medical Council’s register and is now thought to be working in Libya.

A spokesperson for NHS Tayside said: “We are aware of the protest outside the grounds of Ninewells Hospital.

“We continue to be in contact directly with Ms Rose and have offered her another meeting with the Chair, Chief Executive and Medical Director. Ms Rose has advised that she welcomes this further opportunity for discussion.

“We are also making arrangements for other patients who wish to discuss their circumstances to be invited to a meeting.”