Is panto back on stage after Covid shutdown? Oh yes it is!

Final rehearsals are underway for the cast of Rapunzel featuring Puss in Boots. 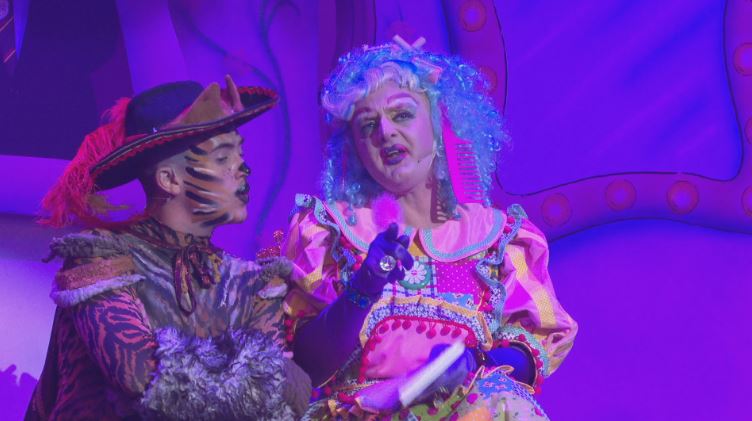 Panto season is back, with venues across the country preparing to lift the curtain.

For one Angus theatre, it’s their first festive performance for three years, having been forced to close due to the pandemic.

Rehearsals are complete for the cast of Rapunzel featuring Puss in Boots ahead of the first performance at Webster Theatre in Arbroath this weekend.

Arron Usher, who plays Aunt Britney Sheers in the romp, said it was important to have panto back.

He said: “It’s quite magical, you lose yourself in the story and in the characters. Lots of people and lots of children don’t go to see theatre, so panto is really important to introduce them.”

Live entertainment was cancelled during the height of the pandemic with actors across the country losing out on work.

For some, it’s the first time they’ve performed on stage since restrictions were lifted.

“[We’re] slowly starting to get stuff now. I’ve had other friends who have done panto last year, but they closed early so they never got a full season.

“We feel as if we’re slowly starting to come back to some sort of normality.”

Finlay McKillop, who takes on the role of Puss in Boots, said: “When it [Covid] first kicked off I was at college down in London and it all moved online, so I was tapping in my kitchen and my mum was watching me do ballet in the living room.

“But slowly and steadily, the industry is getting back on its feet and it’s nice to be into it.”

There was concern that demand for stage performances might have dropped post-Covid.

But so far, Webster Theatre has sold around half of the available tickets for this year’s panto.

They’re also ensuring those struggling with the cost of living can still afford to come.

Scott McRuvie, team leader at the theatre, said: “We’ve come up with an initiative that will allow people to pay what they can for tickets to access the panto on December 20 and 21.

“It’s not means tested in any way – people are able to access those tickets as they feel necessary.”