‘No animal deserves this’: Horse hit with firework loses eye

Dettori was left in 'excruciating pain' after he was hit by a rocket in an Aberdeen field. 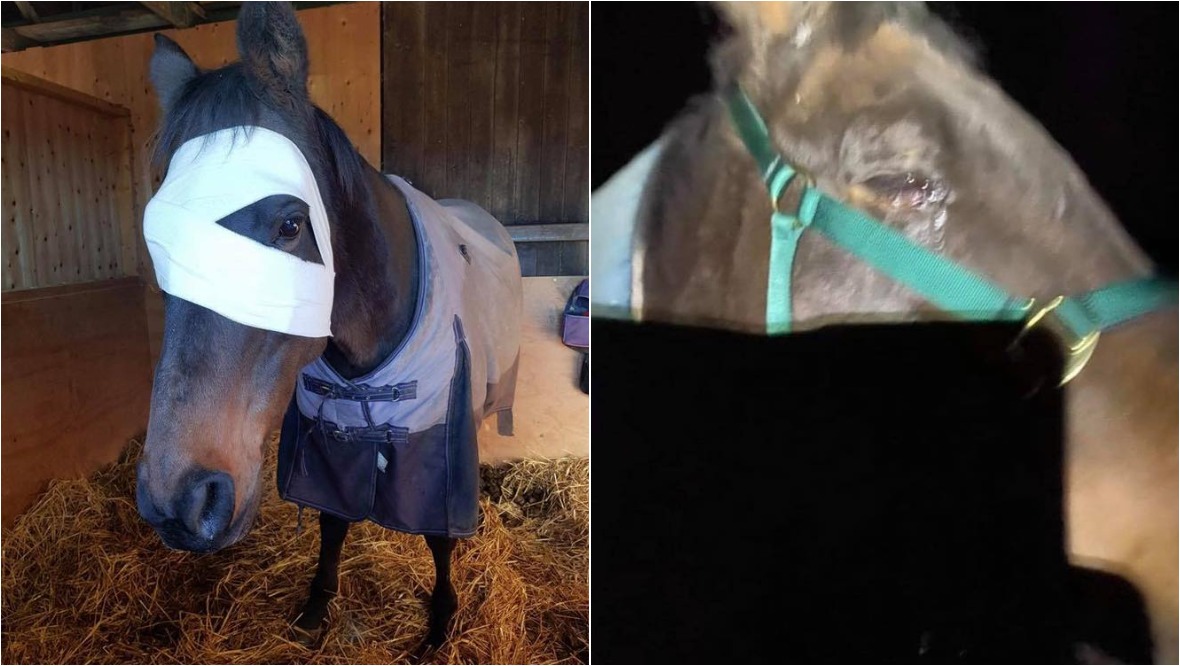 A horse is set to lose his right eye after being hit with a firework in an Aberdeen field.

Dettori’s owner took to social media to describe how the animal was left in “excruciating pain” after he was struck by part of the lit device near Countesswells on Bonfire Night.

In a detailed Facebook post, she described how the rocket has caused “irreversible damage” after it “pushed his eye so far into the socket that all the fluid has come out and filled with blood”.

The owner said she faced the difficult decision on whether to put Dettori down or opt for surgery to remove his eye.

She wrote: “To the man that decided to set off a 30-minute display of fireworks next to a field of horses near Countesswells.

“Your actions have directly inflicted excruciating pain and terror to our beloved Dettori.

“Your awful actions have meant that a part of the firework you set off has gone directly into Dettori’s eye, pushed his eye so far into the socket that all the fluid as came out and filled with blood.

“Your actions have meant that our horse only has two options. Dettori can be put to sleep, or he can go for an operation to get his eye removed.

“In the words of our vet ‘the damage is so severe it is irreversible’.

“This is the reality me and my mum are faced with after your horrific choice to set fireworks off next to a field full of horses.”

The owner said the police have been contacted over the incident and called for tougher restrictions on fireworks.

She wrote: “Both me and my mum feel it was important to share the message as to why fireworks are so dangerous, especially when they are reckless.

“I hope what has happened to Dettori, as awful as it is, prevents something like this happening to someone’s else horse.

“We are still unsure as to the outcome; we are waiting to see how Dettori handles the trauma he has been inflicted, and as you can imagine he is very stressed.”

She added: “Please think about your actions and the consequences they have on others. If it were not for our friends at the yard, we would not have found Dettori until the morning.

“No animal deserves this.”

A Go Fund Me campaign has raised nearly £8000 for Dettori’s surgery so far.

A Police Scotland spokesperson said: “Around 9.45pm on Thursday, 5 November, we received reports that a horse had been injured within a field on Blacktop Road in Countesswells.

“Officers attended and enquiries are ongoing to establish if any crime has been committed.”