Street Soccer Scotland will host a small-sided international tournament in City Square in Dundee this September. 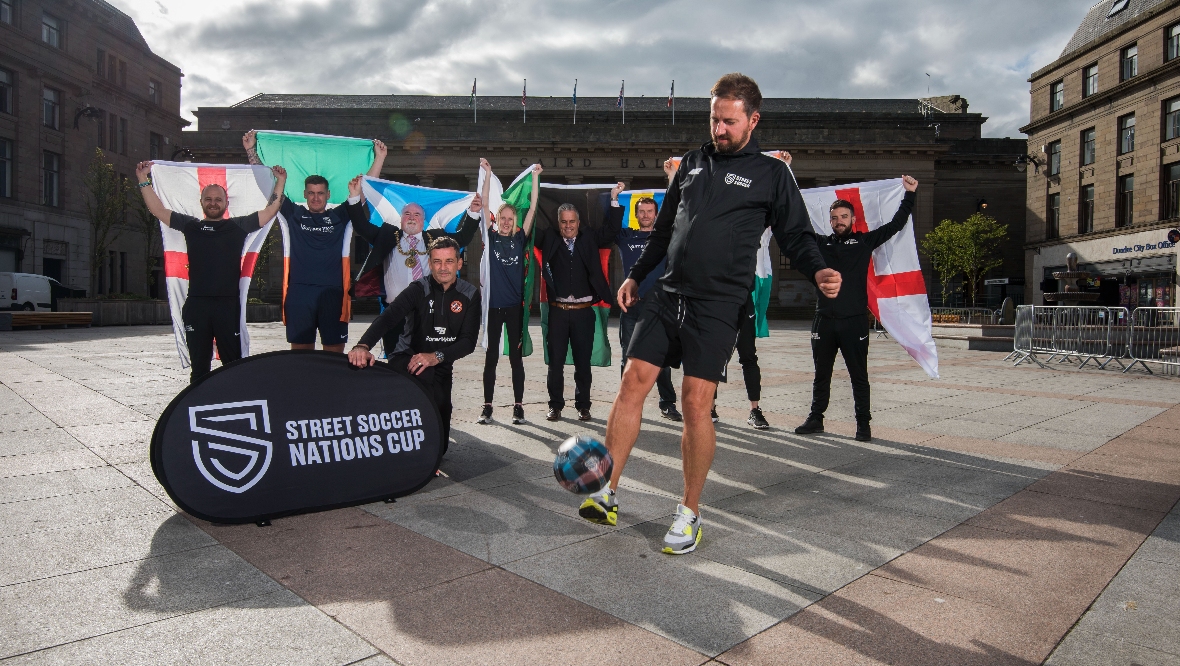 Street footballers from around the world will head to Dundee city centre to take part in a new international tournament next month.

The Street Soccer Nations Cup will be held on a four-a-side pitch in City Square, outside the Caird Hall, from September 9 to 11.

Featuring 16 countries including England, Wales, Northern Ireland, Republic of Ireland, Sweden, France and Ivory Coast, the event will allow players from street football projects around the world to represent their country.

Supported by the Scottish Government and Dundee City Council, the tournament will aim to highlight the societal issues that street footballers face.

The event will feature a number of organisations working in social impact to highlight the power that sport possesses to make positive change.

David Duke, founder and CEO of Street Soccer Scotland, said: “We are delighted and grateful that Dundee City will host our first ever Nations Cup as we invite our friends and colleagues from various projects around the world.

“The Street Soccer Nations Cup will more than a football event. It is an opportunity for players to represent their country and have a life changing experience.

“The matches will be exciting, and we hope to create a real carnival atmosphere for spectators whilst highlighting the power of football.”

Lord Provost of Dundee City Council, Bill Campbell, said: “It’s great news that Street Soccer is bringing its Nations Cup 2022 to Dundee later this year. Football has the power to unite us all.

“The Nations Cup is a fitting reminder of the importance of inclusivity in sport, something I too am keen to champion.

“This city has a proud footballing tradition, from grass roots to international level, and I’m sure the people of Dundee will take this tournament and its players to their hearts.”

Dundee United head coach Jack Ross said: “Street Soccer is an organisation I’ve supported for a long time both as a player and a manager.

“I’ve watched their growth and the fact they have managed to get Dundee to host an event like this is terrific. It’s a brilliant organisation that helps people who need opportunities in life. I’m delighted, as head coach of Dundee United, to back it.

“First and foremost, I’m a football fan and I’ve always recognised the power the game gives to educated and support people. Football gives people something to look forward to.

“I’ve seen first-hand the difference Street Soccer has made to some people’s lives and David Dukes, as CEO of the organisation is a brilliant example of it.

“It’s a terrific thing for the city to have at their disposal and I know from speaking to some of the guys involved in it that playing this tournament in Dundee will give them a real lift.”