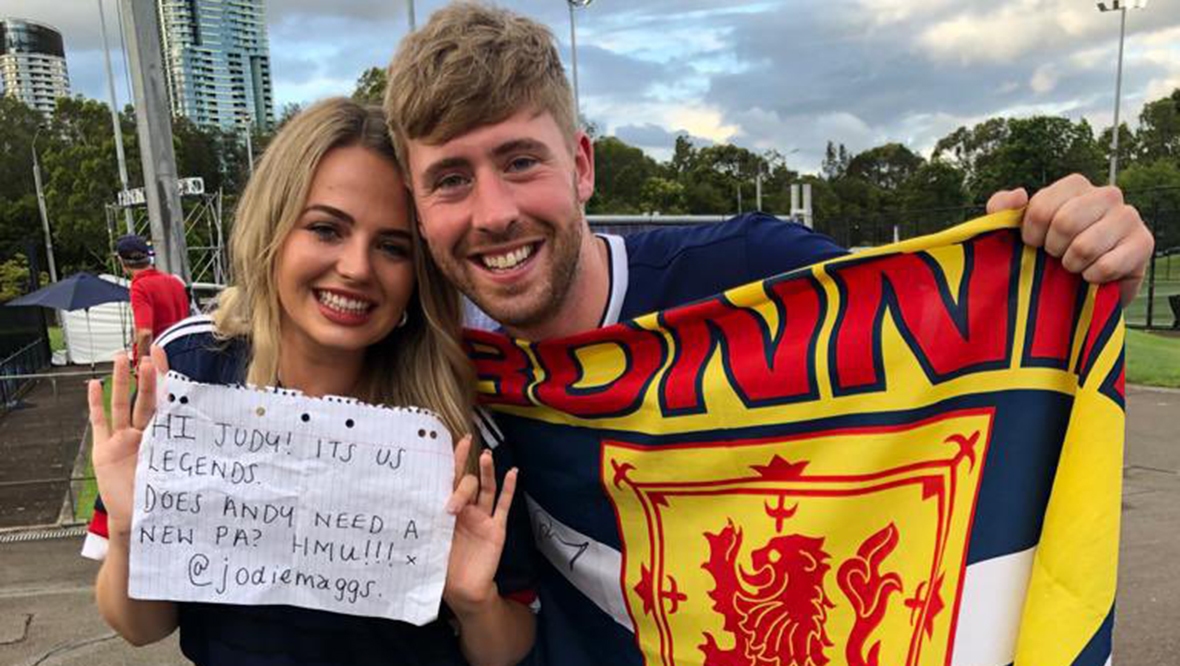 Two Scots who cheered on Andy Murray in his hard-fought victory over Nikoloz Basilashvili in the second round of the Sydney Tennis Classic have been rewarded by the tennis star’s mum.

Steven Glennie and Jodie Maggs, who are from Dundee but live in Sydney, went viral after Judy Murray appealed for help in identifying them, after the pair were shown in television coverage of Murray’s clash against the Georgian, who is ranked number 23 in the world.

Judy wrote on Twitter: “Can anyone in Sydney or Scotland identify these Scots who were at Andy’s match v Basilashvili? Would like to invite them quarter-final….”

The message sparked a frenzied period of social media activity for Steven and Jodie.

Speaking to BBC Good Morning Scotland, Jodie said: “We didn’t realise at all yesterday, it actually ended up being quite a late night, we didn’t get home until 1am in the morning.

“We had had a couple of drinks so we ended up sleeping a bit later than usual this morning, so at about half past nine we both woke up and our phones were just glowing up – Instagram and Facebook and everyone was tagging us.

Steven added: “She went and made a Twitter account just to reply to Judy Murray and, yeah, I think she’s liking it so far anyway. She got a couple of thousand hits on her tweet so she’s happy.

“I had a bit of a hangover this morning and then obviously my social media went a bit crazy, and then Judy Murray actually got in touch with us via WhatsApp and offered us the tickets.

“So now I’m back on the beers again, got my Scotland flag on again, and ready to go. We support anybody Scottish who’ll play anywhere on this side of the world. “

Jodie: “He actually played a really good game (against Basilashvili). It definitely made such a difference, us being there and egging him on.

“He was clocking us and giving us the eyes, he knew we were there and he actually thanked me at the end of the game, he just said ‘thanks very much for all your support’ and he signed our Scottish flags so we’re really happy about that.

“We can’t wait, we’ve got our Scottish tops on, ready to show Andy Murray the support he deserves.”