Accident and Emergency Department at Dundee's Ninewells Hospital is dealing with more than 200 patients a day. 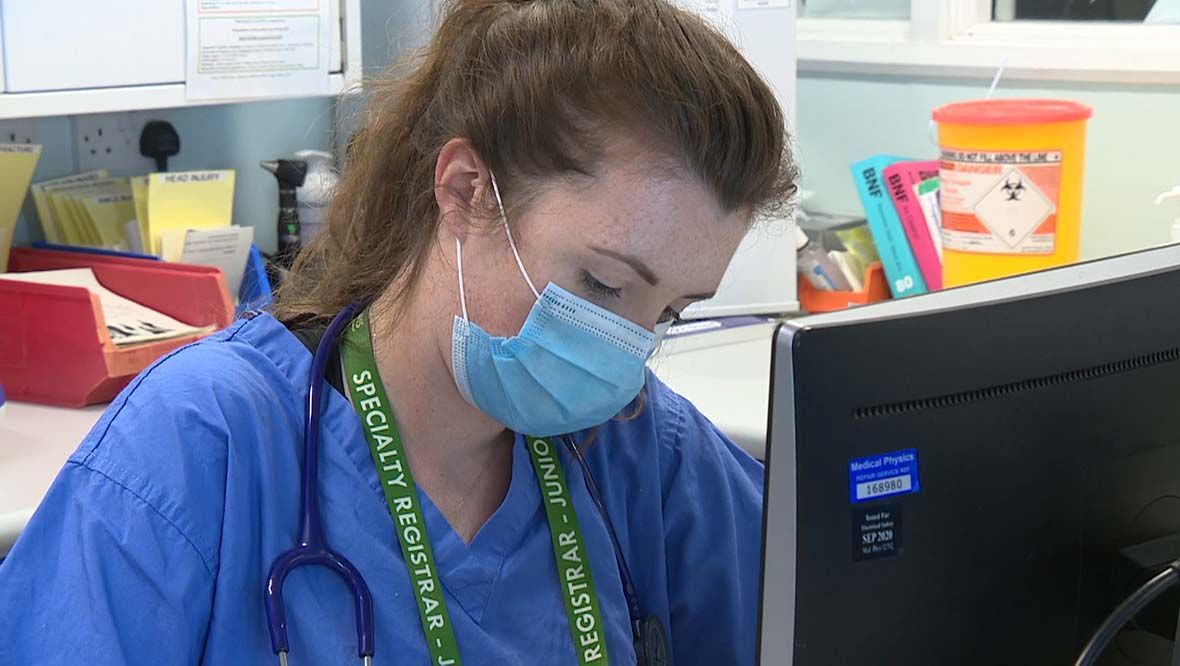 Emergency doctors at Scottish hospitals say they are experiencing pressures this summer “normally seen in the depths of winter”.

Medical teams believe any hope of an imminent recovery from the coronavirus pandemic is now wishful thinking for the NHS, with some of the country’s A&E departments seeing record levels of patients.

Staff at Dundee’s Ninewells Hospital say they’re extremely busy but managing to cope. Rooms in all areas of A&E are in high demand – numbers are now back at pre-pandemic levels.

The department normally deals with 160 to 180 patients a day. In recent weeks, that number has reached in excess of 200.

They are seeing all ages but as it’s the summer holidays, they are dealing with many younger patients.

Julie Ronald, who has been an emergency consultant at Ninewells for ten years, told STV News: “It feels like a little bit like we have entered into winter earlier particularly as the attendances have continued in such a consistent way.

“From a numbers perspective we are coping – just. The challenges of staff having to be off to self isolate doesn’t help some times.

“We are seeing all ages but as its the summer holidays, we are seeing particular increases in children with high temperatures and lots of minor injuries as people are returning to activities that they used to do pre-lockdown. “

The growing pressure on hospitals comes as the country adjusts to life under level zero of the Scottish Government’s routemap out of lockdown.

The whole of Scotland saw an easing of restrictions on Monday but new coronavirus infections remain high.

Several health boards – including NHS Highland, NHS Grampian and NHS Lanarkshire – have said in recent weeks they are under pressue due to increasing numbers of patients and staff infected with coronavirus.

Despite the challenging climate, NHS Tayside says it continues to have enough staff to meet the demands of Covid cases and the remobilisation of its non-Covid services and planned operations.

Dr Pamela Johnston, NHS Tayside operational medical director, said: “At the moment, we see that our Covid cases have plateaued.

“This is comparatively reassuring as we also see that our community prevelance is declining however we don’t really know what is going to happen in the coming weeks and months so we have to prepared for all eventualities.”

NHS Scotland figures released this week show the proportion of patients seen in A&E departments within the four-hour target has fallen to the lowest level since 2019.

Almost a fifth (19.9%) of the 25,418 patients who attended A&E in the week ending July 11 waited more than four hours to be admitted, transferred or discharged.

There were 712 patients who waited longer than eight hours, and a further 167 faced a wait of more than 12 hours.

The Scottish Government’s target is for 95% of patients to wait no longer than four hours, although this has not been met since July 2020.

In Lanarkshire, more planned surgeries have been cancelled as its three hospitals face sustained pressure, which they say shows no sign of easing. Other NHS boards are also reducing capacity for routine surgeries.

Dr David Chung, vice president of the Royal College of Emergency Medicine, said: “This is new territory for us. It is quite a worrying trend that we have noticed over the past couple of weeks.

“Everybody who has been dealing with Covid within in the NHS for the past 18 months is really now running on fumes in some ways.

“We were expecting some kind of a reprieve over the summer and that has absolutely not happened. The College actually had been running a campaign called Summer to Recover, which sounds like wishful thinking at the moment.”

The Scottish Government is investing an additional £12m to support emergency care for non-Covid patients.

It aims to publish its plan to remobilise the NHS in the coming weeks.