Health board expects to declare Covid ‘major incident’ next week

Military personnel were drafted in to support NHS Grampian amid the rising number of coronavirus cases in the region. 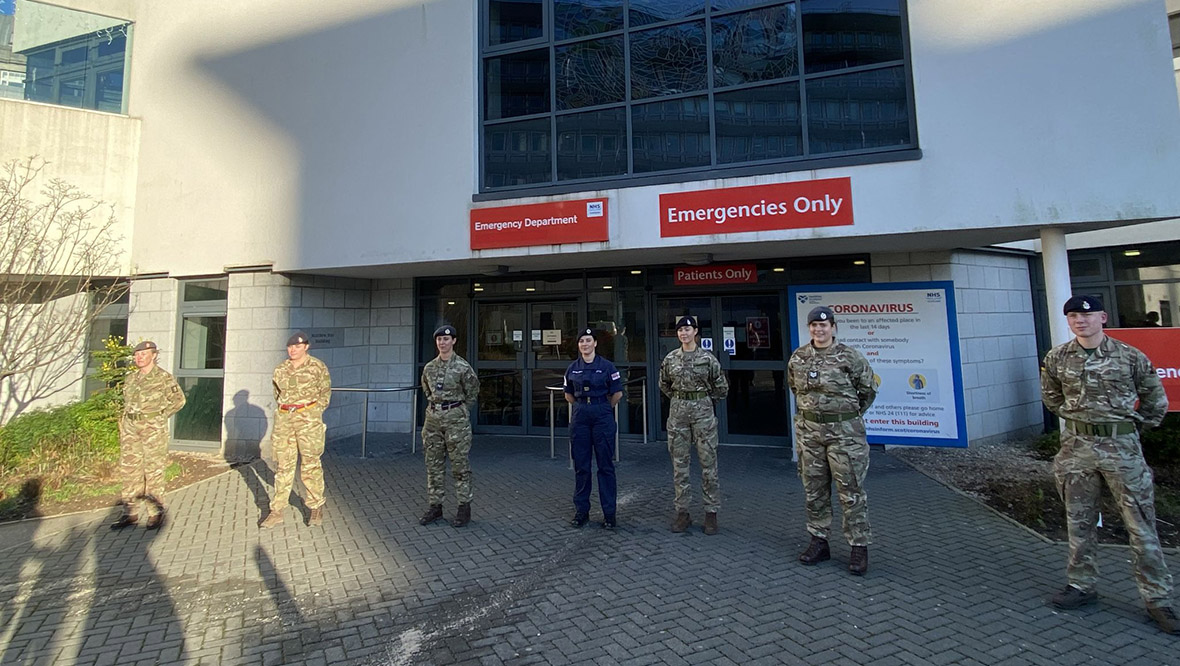 NHS Grampian expects to declare a “major incident” next week after seeing a large increase in the number of coronavirus cases in the area.

In a Covid-19 briefing note, the health board said it anticipated “continued and significant growth” of the virus, which would place further pressure on hospitals, care homes and community teams.

The note said: “Our planned response will include a declaration of a major incident when a number of key trigger points are reached.

“This decision will be taken by the strategic and tactical commanders (CEO and portfolio leads respectively) and informed by G-OPES levels across the whole system; the number of covid patients in hospital and levels of staff sickness from Covid.

“Looking at our local data, these triggers could be met as early as the end of next week.”

A spokeswoman for NHS Grampian said: “Our planned response will include a declaration of a major incident when a number of key trigger points are reached.

“This decision will be taken by our strategic and tactical commanders based on the system pressures, number of Covid patients in hospital and levels of staff sickness from Covid.

“Looking at our local data, these triggers could be met as early as the end of next week. We are currently planning what this means for staff, patients and services in Grampian.”

The warning comes as an extra 90 military personnel were drafted in to support health boards in Scotland under pressure from the Omicron variant.

They will join 221 members of the Armed Forces who have been supporting the vaccine programme across Scotland, while 96 are driving ambulances in support of the Scottish Ambulance service.

What is the view of the Armed Forces personnel brought in to help?

Nicki Wilmshurst, an RAF nurse who is stationed in Devon, southwest England, said: “We arrived in Aberdeen yesterday, having travelled from Edinburgh. Myself, I travelled up on Tuesday from Plymouth with a couple of other nurses from my unit.

“I imagine I’ll be assisting nurses on a ward. Within my own hospital in the trust where I work, I have been working on the wards throughout the pandemic.

“I’m more than happy to be here, I think it’s good to have military up here and to be helping the NHS, that’s what our job is. I feel quite fortunate and I’m looking forward to getting started.”

Grace Jeyes, a medic in the Royal Navy, has been drafted up to Aberdeen from Royal Navy Air Station Culdrose in Cornwall. She said: “The NHS in Scotland are obviously in a bit of need at the moment and we’ve basically come up to help and assist them.

“It will be like working on wards and dealing with patients, so that’s either emergency departments or intensive care, or other wards that are short-staffed at the moment.”

Warrant Officer Class Two Rowan Orton, from Queen Alexandra’s Royal Army Nursing Corps, said: “We’re quite excited and honoured that we’re going to be here to help and everyone is so appreciative that we’ve actually come up.”

WO2 Orton, who is based in Catterick, North Yorkshire, added: “The NHS is strapped, they’re at breaking point, you know, they’ve been fighting this battle for two years, so if we can relieve some of the stress from them and help in any way then, yeah, it’s an honour.”

What is the Scottish Government and UK Ministry of Defence saying?

Health secretary Humza Yousaf said: “The emergence of the Omicron variant of Covid-19 is adding to the winter pressures usually faced by the NHS which is why boards, like their counterparts across the UK, have requested military support to complement our existing resources.

“I’m grateful to military personnel for their efforts at this time, along with all frontline staff in our NHS for the vital role they play in help keeping us safe.

“At this time it is also particularly important that we continue to take all precautions to prevent transmission.

“So test regularly for the virus, limit socialising in the run-up to Christmas, wear face marks where required and open windows to improve ventilation.”

Military personnel were previously called in to help NHS Lanarkshire and NHS Borders in October amid pressures on the health service.

There will be 38 in NHS Grampian and 32 in NHS Lanarkshire, with both of those areas receiving four weeks of support.

A spokesman for the Ministry of Defence, said: “The UK Armed Forces are increasing their support to the Scottish NHS, providing 84 defence medics to the NHS boards in Lanarkshire, Grampian, and Ayrshire and Arran.”