Getting into lycra is hard bit, Charles jokes with cyclists on visit

The Prince of Wales met residents of Ballater and took in views from the Cambus O’May suspension bridge. 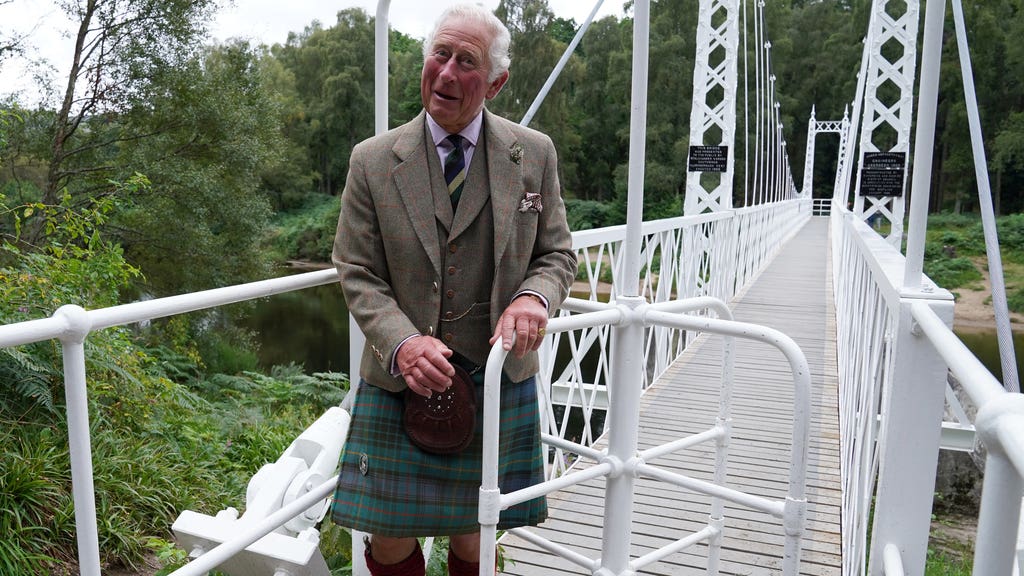 The Prince of Wales joked that “getting into lycra is the hard bit” as he met cyclists during a visit to a small Scottish burgh.

Charles and Camilla, the Duchess of Cornwall, met with locals in Ballater, Aberdeenshire, and took in views from the Cambus O’May suspension bridge.

The bridge, which spans the River Dee, has been restored after almost being destroyed during Storm Frank in 2015.

Kate Allum, a board member with the Ballater Royal Deeside group, said: “It is fantastic to have met Prince Charles.

“The bridge is so beautiful and we are so pleased that it is back, our group looks to help preserve and promote areas of Ballater that are fantastic and the bridge is just that.

“It looked too sad before, it is good that it is back to its best.”

Charles walked across the bridge dressed in a kilt, taking in the spectacular views, before chatting with some locals.

Petting dogs and speaking to some cyclists, he said: “Sorry for keeping you guys waiting, I suppose our little trip has slowed you down.”

Asking each of the cyclists where they were headed, Charles joked that “getting into lycra is the hard bit” when discussing cycling.

A painting of the suspension bridge by local artist Kimberly Smith was also gifted to Charles during his visit.

Ms Smith said: “I think I forgot to breathe when I was speaking to him, it was very surreal.

“It is so good to see the bridge back to its best, it is such a beautiful spot.”

Aberdeenshire’s deputy provost, councillor Ron McKail, added: “This is probably the only place in the world you could go cycling and meet Prince Charles.

“It is so good for the community here in Ballater and Aberdeenshire as a whole to have him visiting.”

Earlier, Charles and Camilla, who are know as the the Duke and Duchess of Rothesay when in Scotland, met residents of Ballater.

They visited the village’s new community and heritage hub where they unveiled a plaque to mark the occasion.

The couple then toured the village, stopping at local shops on the way and speaking to residents of Ballater who lined the streets to catch a glimpse of the pair.

Life-long Ballater resident Alistair Cassie, 76, who welcomed the two royals to the new Community and Heritage Hub, said: “I have mixed with most of the Royal Family and they integrate very well with the village and people in the village respect them.

“He certainly put a lot of effort and money into the village, in particular the caravan site which was badly damaged by the flooding.

“He did very well, his heart is very much in the village.

“I get on very well with him, I was invited up to Birkhall and we have had some cracking nights up there, it is very off-the-cuff stuff.

“He is very nice, he even sent me a present on my birthday.

“He is very friendly and he is very open and informal.

“Everyone always thinks the royals are something different but they are just normal people and when they come up here on holiday they like to be treated as normal people, just be yourself.”

Eileen Lawrence, 80, was just one resident who waited outside to try her luck at meeting the two royals.

She said: “Everyone is delighted that they have an interest in Ballater, he was wonderful after the flooding.

“He put a caravan out near the barracks for free food for everybody.”

Residents then followed behind the duke and duchess as they made their way around the village.

Anne Richardson, 78, said royal visits become the norm after a while.

She said: “He’s just normal, I was very fortunate a few years back to actually go to one of the get togethers at (royal estate) Birkhall and it was just like being in someone’s house.”

Stopping to pay their respects at the war memorial on Bridge Street, 94-year-old Colonel Hugh Inkster, a member of the British Legion who was “dying to meet the prince” managed to share a few words with Charles.

Speaking after their encounter, Mr Inkster said: “I was dying to meet him because I have waved to him from afar but I never really spoke to him.