Community care system at 'full capacity all of the time'

STV News was given behind-the-scenes access at Turriff Cottage Hospital. 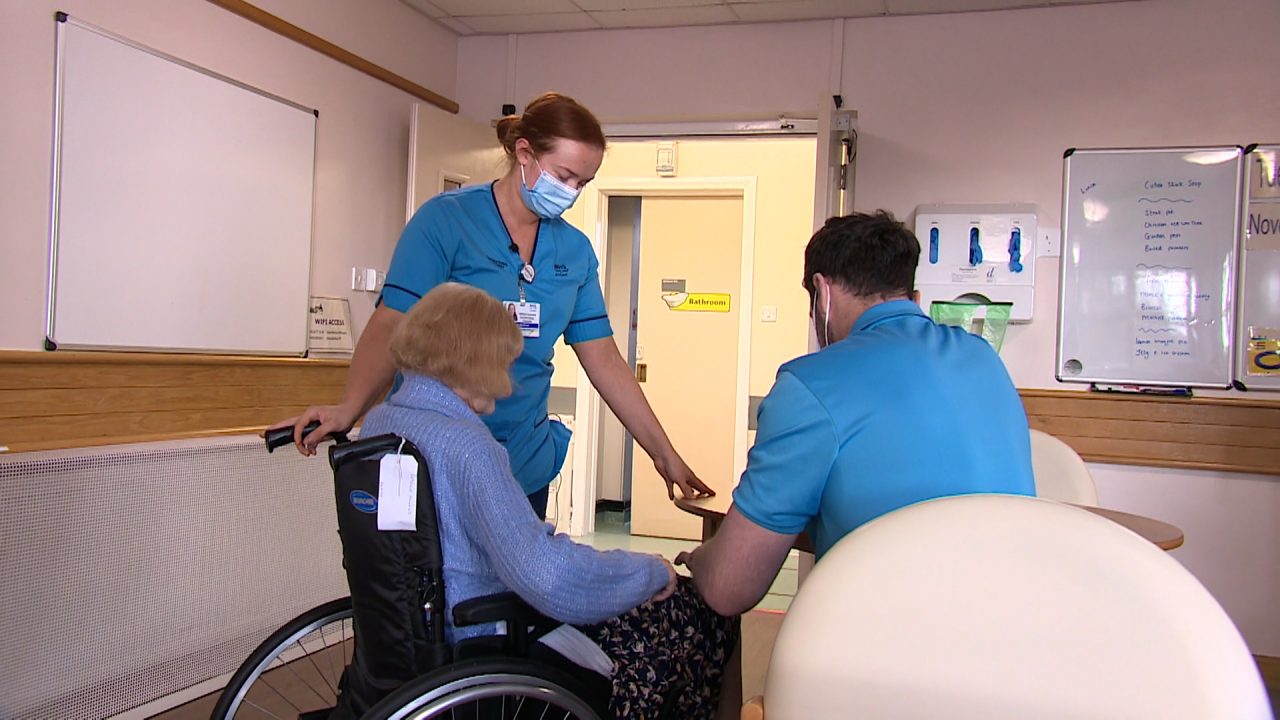 Overwhelmed and under pressure at every level, staff say the north-east’s care in the community system is at “full capacity all of the time”.

Hospitals, care homes and carers are all reporting shortages in people and resources, and warn that meeting the needs of patients is a constant struggle.

STV News was given special access to some of those services at Turriff Cottage Hospital.

‘Lucky to be alive’

Staff work round the clock caring for patients at the 14-bed unit; some are there to avoid having to go into Aberdeen Royal Infirmary, while others, such as Marilyn Allathan, have been discharged from the hospital.

She tripped and broke both her legs, before a second fall left her with a broken hip. “Silly me stood up when I shouldn’t have, and I fell,” she said.

Patricia Manning, meanwhile, is recovering from major surgery. After other treatment options were exhausted, her lower leg was amputated at Aberdeen Royal Infirmary.

“It all started with a couple of falls and then I got an infection in my big toe which turned gangrenous,” she said.

“A neighbour found me – I’d lying down for nine hours, trapped in my house because I Iive on my own.

“I feel very lucky to be alive and to have been found, because I could have lain there for days.

“They said I had two options – ‘you can either live on painkillers or we can actually amputate from just below the knee’ – so I said just ‘take it away’.”

‘At capacity all the time’

“I’ve been in community rehab services for 19 years, so I’ve seen a big change,” she says. “I’d say there’s much more demand on the beds than there was in the past and patients are living longer.

“We’ve got an increased population who’re needing our services more and more. We work at capacity all the time.”

Patricia has watched staff challenged on a daily basis since she was first admitted in August.

“Staff are very stretched because they are very conscientious and seem to be dealing with one thing after another, there’s no let up.

“There’s a lot of paperwork, so they are stretched because there aren’t enough bodies.”

Community hospitals are designed to ease the pressure on acute hospitals, but at Turriff Cottage, bed supply is limited, and staff say trying to find the right care package for patients is a constant struggle

Irene Thomson, the senior charge nurse, said: “You’re dealing with delayed discharges every day. At the moment, we’ve got five patients waiting to be discharged into a care home.

“There’s a lack of placements in the community, so we find that quite challenging. I don’t think public quite understand the pressures we have to deal with every day and the demands.”

Part of the role of places such as Turriff is to get people back into the community, possibly into their own homes, with support.

Shona Campbell, from Aberdeenshire Health and Social Care Partnership, said: “Part of the role is to make sure people get back to their community as quickly as possible.

“We’re doing a lot of work to get people home from hospital.”

‘I’d rot without them’

“If it wasn’t for them, I’d just rot,” he said. “I was sitting here watching TV and started shaking like a leaf and hunting for breath. I couldn’t get breath, the carer came, she phoned 999 – you try phoning 111, but you can’t get through.”

The 78-year-old, who lives with COPD, had been battling cancer when he developed a chest infection. Carer Susie Summers checks in on him regularly

“I feel proud that I can do all these things to help people where they need me most,” she said.

“You’re faced with different circumstances every day, so you don’t know what you’re going to. You can’t assume that Hendry would be ok.

“There’s a lot of people that come to me and say ‘you are doing a great job’, but in my own opinion, we’re not valued enough financially”