Parents to lead Team Scotland in a UK-wide relay from John O' Groats to Land's End. 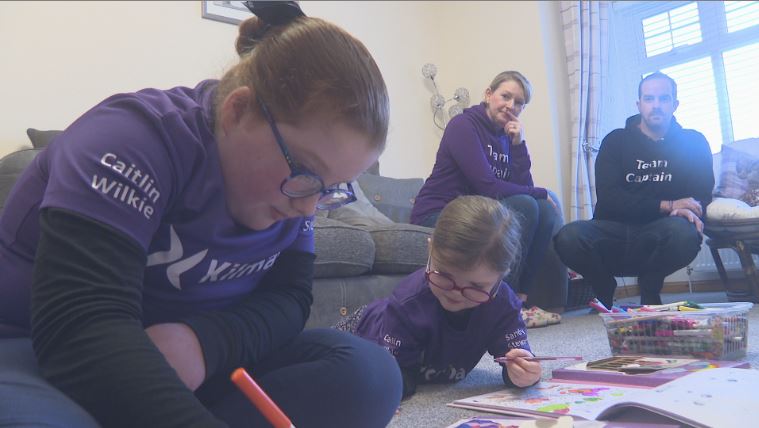 A family has launched a campaign to fund research into one of the rarest genetic disorders.

Liam and Ashley Wilkie, from Kirriemuir, Angus, are leading Team Scotland in a challenge called ‘Carry the Gene’, a relay from John O’ Groats to Land’s End.

Their daughter, eight-year-old Caitlin, was diagnosed with Bardet Biedl Syndrome (BBS) in 2017.

She is one of only seven children in Scotland to live with the condition, which causes learning difficulties, sight loss and obesity.

Caitlin has lost all of her night vision and cannot see in dim light.

In an effort to support research, Liam and Ashley came up with the idea of a nationwide relay.

Ashley told STV News: “We put it to the charity BBS UK and they thought it was a wonderful idea, so they asked if we would man Scotland.

“It’s our job to get the baton from John O’Groats to the Scottish Borders, which we plan to do in April over roughly a three-week period.”

The challenge north of the border will be split into 12 legs, including cycling, running and walking at various locations.

It’s not the first time the couple have thrown themselves into a money-raising campaign, having previously helped raise more than £100,000 for BBS research.

Caitlin’s father Liam said: “The community of Kirriemuir has been exceptional, everyone’s got behind us.

“We call it the Wilkie’s warriors – she’s got her own little army of troops behind her, but everybody’s really got behind everything we’ve tried to do.

“This challenge we’ve set up, that’s 160, 170 people signed up throughout the length of Scotland, so it’s humbling to see.”

Gene therapy trials expected to start next year have given the family hope, although they have been hindered by lack of funding.

“Gene therapy was at quite a critical stage,” Ashley said. “[It was] due to start this year and unfortunately some investors have pulled the plug.”