'My disabled son was traumatised after being restrained in school'

Beth Morrison is campaigning to change the law after her son Calum was left traumatised by an incident at school. 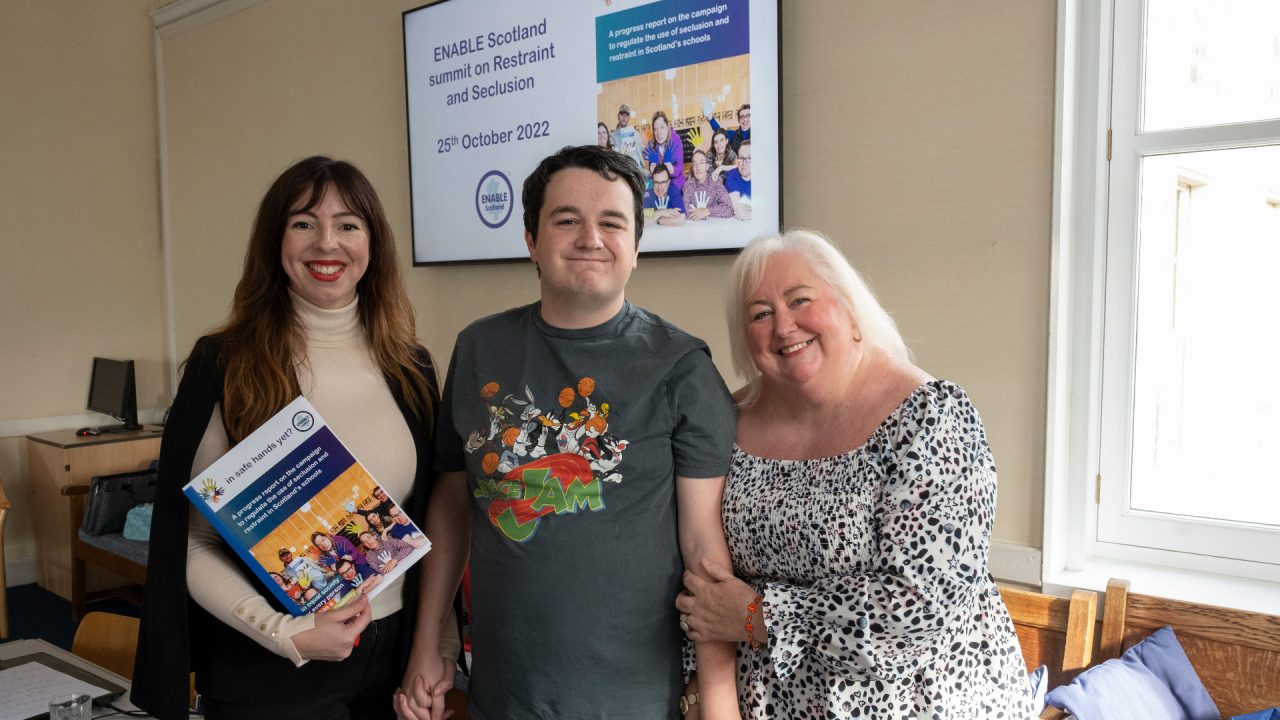 A mother whose disabled son was physically restrained at a special school is launching plans for a new law in his name.

Calum Morrison, who is 23, has epilepsy, autism and learning difficulties.

When he was 11 years old, he was forcefully restrained while at school, and his mother Beth Morrison, says he has been left traumatised more than a decade later.

She has been campaigning since 2010 and wants to make the current statutory guidance into law, with mandatory recording and reporting of all incidents.

Restraint involves holding a child or young person to stop them from moving, while seclusion means shutting them in a room or safe space alone.

The Scottish Government guidance says it should only be used “as a last resort.”

Ms Morrison, who lives with Calum in Monifieth, Angus, is also calling for all teachers, support teachers and auxiliary staff to be provided with mandatory training in how to de-escalate difficult situations so physical restraint can be avoided as much as possible.

“The experience of this behaviour on young people is traumatising,” Ms Morrison said, “It affects their social skills, their enjoyment of school and – ironically – their subsequent behaviour at school.

“I think the people of Scotland will be shocked to learn that currently there is no law that protects their child being physically and forcefully restrained in school or educational settings.”

Ms Morrison is being supported by Enable Scotland, the country’s largest charity for people who have learning disabilities, in her efforts to establish Calum’s Law.

The charity says that draft guidance produced by the Scottish Government is “not fit for purpose”, and there remains a lack of training for education staff, no monitoring of the incidents of seclusion and restraint used against children in schools, and no identified regulator responsible for monitoring its use in education.

But Enable Scotland insisted there continues to be a lack of progress in training and monitoring of staff in schools to this day.

It has now launched its own report titled In Safe Hands Yet? which says children “are still at risk of restraint and seclusion in education settings within Scotland”.

Jan Savage, director at Enable Scotland said: “In simple terms, the rights of children and young people in Scotland are still not protected and it’s unacceptable. Four years after the investigation by the Children’s Commissioner, we should not still be having to ask the question, are our children In Safe Hands Yet? Draft guidance at this stage is just not good enough. Not whilst children are still being restrained.

“Action is needed to protect children’s rights in law, and to set out a clear strategy for systematically reducing restraint and seclusion in Scotland to a point where it is no longer a feature of our education system in Scotland.”

A petition launched by Ms Morrison in 2015 calling on the Scottish Government to issue guidance on the use of restraint and seclusion in schools was closed by the Education, Children and Young People Committee at Holyrood during a meeting on Wednesday.

Ms Morrison said: “We have been campaigning for change now for over a decade and it’s very clear to see that the current approach to non-statutory guidance doesn’t work. In this day and age, we should have a better understanding of how to work with young people – especially those with learning disabilities – without the use of forceful restraint.

“Calum’s Law is being launched to finally put in place our three key points of change that we are lobbying the Government on. Statutory laws, mandatory training and a mandate to report any such incident of restraint to parents or carers.”

Education Secretary Shirley-Anne Somerville said: “Restraint and seclusion in schools must only ever be used to prevent harm and as a last resort.

“The Scottish Government is exploring options for strengthening the legal framework in this area.

“Human-rights based guidance was developed with input from young people, parents, carers, education staff and the Children and Young People’s Commissioner Scotland, and has now been consulted on.

“The consultation closed on October 25. We will carefully consider all feedback received.”