Sandy Ingram composed a song for the Queen's visit to Forfar in 2004. 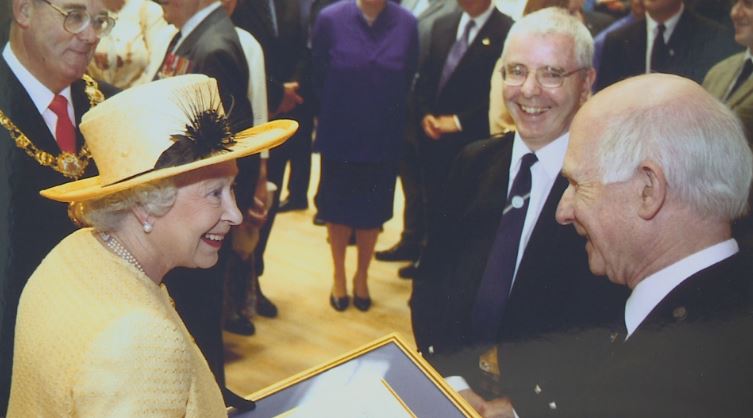 A composer who wrote music for the Queen has been fondly recalling his encounters with the late monarch.

Sandy Ingram, a retired procurator fiscal from Glamis, was asked to write a song for Elizabeth II ahead of her visit to Angus in 2004.

From his home in the shadow of Glamis Castle, where the Queen visited often as a child, the musician, alongside his dog Spencer, fondly remembered his meeting with the monarch.

“Three of us played and afterwards, when I’d finished playing, I went down to speak to the Queen and hand over the framed music,” he said.

“When I did, I was rather cheeky and said, ‘I come from Glamis, Your Majesty’ and a big, broad smile came over her face.

“I always joke, of course, that she likes my jokes, but that’s beside the point.”

Sandy’s manuscripts adorn the walls of many royal households and he was lucky enough to meet the Queen on more than one occasion.

“The first meeting I had with her in person was in 1994 when I was given the OBE for services to the Procurator Fiscal Service, so I met her then down in Edinburgh at the Palace of Holyroodhouse,” he said.

“I’m an old guy, I lived throughout her whole reign of 70 years and, of course, she has the connection with Glamis as well.

“It really was very sad [when she died]. I just thought, ‘what a shame to lose such a wonderful person’.”