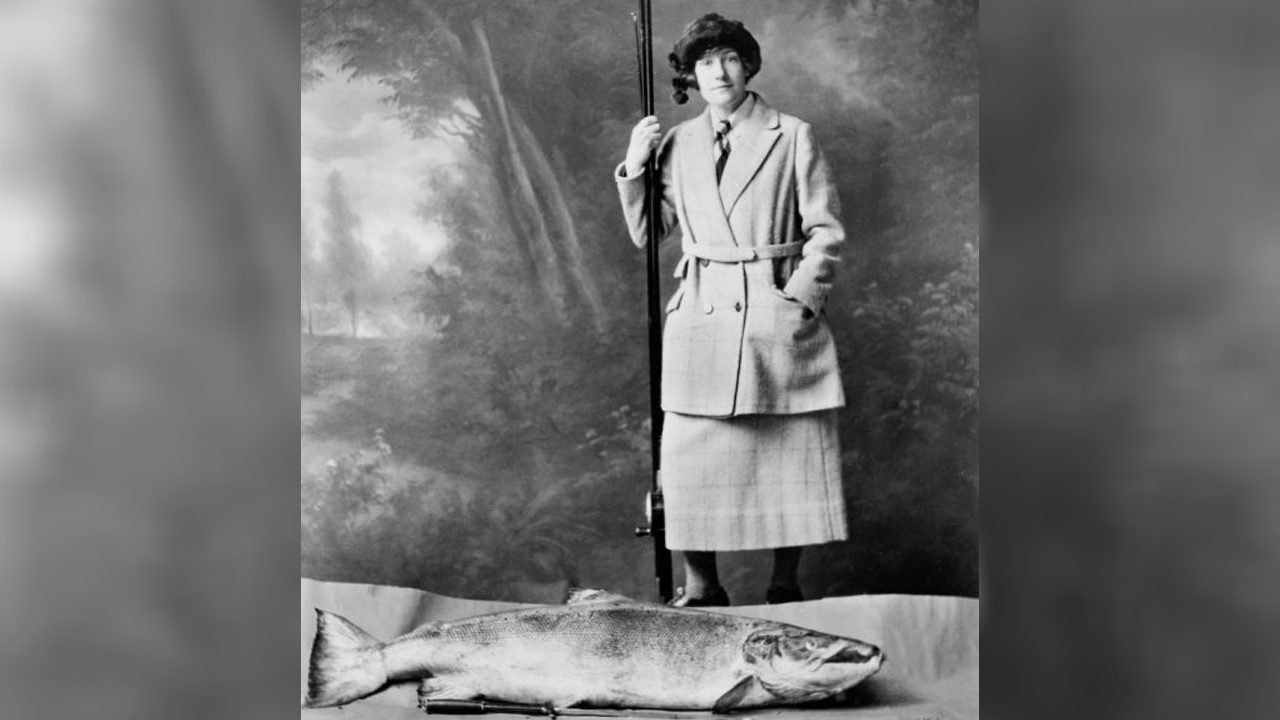 A recording of a woman telling how she caught Britain’s biggest salmon has been heard for the first time.

Georgina Ballantine made angling history on the River Tay on October 7, 1922, hooking a fish weighing 64lbs.

Granted a chance day’s fishing on the Glendelvine beat by the local laird, it took more than two hours for her to finally haul the salmon into the boat, assisted by her ghillie father James.

On the 100th anniversary of the mighty catch, Miss Ballantine’s family has given a recording of her reading her account of what she described as a “Homeric battle” to Perth Museum.

In the recital, heard by STV News, she says: “As I raced up the bank to join the boat, how I blessed the laird for having a headache – a whole day’s fishing, a glorious, sunny, autumn day.

“Brrrrrrrrr… an alarming amount of line was torn off… the reel screeched as it has never screeched before.

“The fish began to jag… each jag running like an electric shock down my spine… though utterly exhausted, sheer determination kept me from giving up the rod as tighter and tighter still came the order.

“The stroke was delivered and a wriggling monster was heaved over the seat and into the floor of the boat, vigorously flapping his tail with father half lying on top of him.

“He proved to be the heaviest fish of the season, the fish of many seasons, the record for the British Isles.”

Perth Museum is displaying the fishing gear used by Miss Ballantine, and previously unseen photographs and items loaned by her family.

“It’s amazing to hear her voice, there’s just the joy of angling and the weather and she just clearly was having a brilliant day,” said Mark Simmons, senior collections officer.

“The star of the show is the gaff which was used on the boat on the day to haul the fish out of the river.”

On the Glendelvine beat, still owned by the Lyle family as it was a century ago, Miss Ballantine’s story lives on.

“It took two-and-a-half hours to land the fish and she was not going to give up the rod to her dad,” said Lorna Lyle of Glendelvine Estate.

“They started up river and they went zooming all the way to the bottom of the beat, it was an almighty battle.

“She was a woman and she was passionate about fishing, so as a woman it was wonderful that it was Miss Ballantine that caught the fish.”

The mighty salmon was donated to Perth Royal Infirmary and served up on the wards, to the delight of patients and staff.

Now, with salmon numbers dwindling, anglers have to put back the fish they land.

Steve McIrvine, the ghillie at Glendelvine, has landed some heavyweights, but nothing to challenge Miss Ballantine’s record.

“I think it will never be beaten, we’ve had 100 years up until now and I don’t think anyone has come close to it,” he said.

“Even on this river, which holds some of the biggest salmon, or certainly did… I don’t think they’re here any more.”

Miss Ballentine served as a nurse in France in the First World War and lived out her days at Victoria Cottage, overlooking the river where she landed her famous fish.