The Sullivan family from Lossiemouth have welcomed their 12th child Florence into their clan. 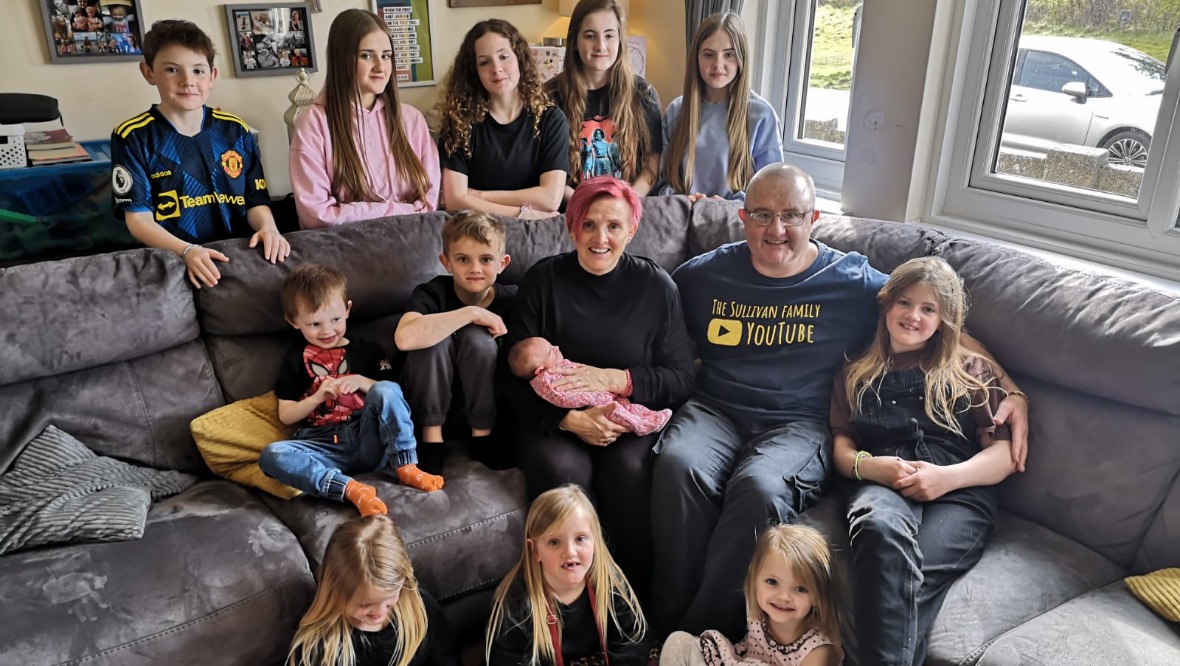 One of the biggest families in Britain has just got even bigger with the arrival of a baby girl.

The Sullivans from Lossiemouth, Moray, are celebrating the recent birth of baby Florence, which takes the number of children in their family to 12.

Although parents Zoe and Ben are delighted with the arrival of their latest bundle of joy, dad Ben has joked he’s barely even held her yet.

“We haven’t actually got to hold her yet, there’s always a big sister trying to get in their first,” he laughed.

The children range in age from newborn Florence to 17-year-old Elisabeth.

Zoe and Ben, who is an aircraft engineer at nearby RAF Lossiemouth, say theirs is a busy household but a very happy one.

Zoe said: “Along the way we’ve just become a little bit more laid back and confident in our abilities, especially after having the youngest set of twins.

“They were ten weeks premature and Erin especially was very sick and that changed our perspective on a lot of things, it makes you realise what’s important and what’s not.”

“The older ones are great, they pitch in and everybody helps out, there’s not very many arguments! There’s the odd few as you’d expect but not really – nothing major, we can deal with squabbles!”

The Sullivans have appeared on TV a few times and share their family ups and downs on their YouTube channel, adding that people are fascinated by big families.

Zoe said: “People used to say to us ‘I’d love to be a fly on the wall, I’d love to see how you do things’ so we thought we’d put a couple of videos out and it’s just grown.”

Ben added: “It’s grown into something we absolutely love now and the biggest thing for us is that we are totally honest about our life.

“The ups, the downs, the good, the bad, the whole lot on there. We are getting such a good response from people, which is great.”

With so many mouths to feed, they say the ever-increasing cost of living can be a concern.

But they always find a way and aren’t ruling out adding to their clan in the future.

Ben said: “We have got quite a few life-changing events going on this year. I am leaving the Air Force so I am looking for new employment.

“We are also looking to buy a property, we rent our house from the RAF, so there’s a lot changing. But never say never, who knows?”