The mammal washed ashore near Ardersier in the Highlands. 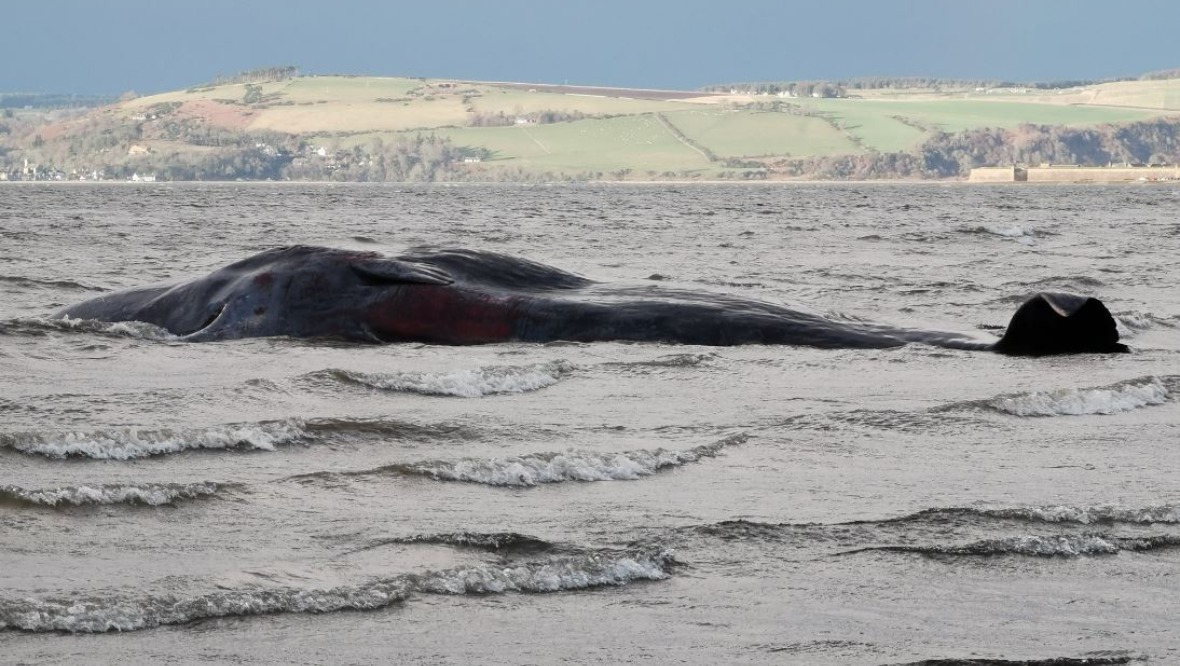 A sperm whale has died after being washed ashore in the Highlands.

The mammal was spotted on Tuesday morning in the Moray Firth near the village of Ardersier, between Inverness and Nairn.

A local Coastguard team was on site along with the British Diver Marine Life Rescue (BDMLR) and Charlie Phillips – a field officer for the Whale and Dolphin Conservation (WDC).

He was notified about the stranding around 11am, with the whale – thought to be about 20-25 tonnes – having been alive and rolling in shallow water for an hour before he got to the scene.

Mr Phillips said: “The whale died very soon after it stranded. It’s a fairly thin looking animal and not in good nutritional condition.

“It’s got to be examined properly, which will happen with the strandings team because there’s a protocol in place.

“We’ve also got Coastguard on scene because all stranded whales belong to the Queen so HM Coastguard are actually the policemen, if you like, who guard the animal.”

He added: “People have a habit of trying to steal teeth because sperm whales’ teeth are quite valuable.

“The Coastguard are a wonderful bunch of people. It’s just one of these things that happen every now and again in rough weather.

“There’s not been a sperm whale for a while, poor thing. Nothing can be done now but it’s past suffering.”

Mr Phillips added an examination would likely take place on Wednesday, with efforts being made to move the whale’s body “up beach so the tide doesn’t carry it away”.

It would be co-ordinated by the BDMLR, with Mr Phillips saying soldiers “very handily just a mile along road in the Black Watch battalion” had equipment that could help the process.

He said: “The light is going to go very quickly because of these wild and rainy conditions.

“There’s not much rain when the tide is low later this afternoon but then it gets dark and working on a big animal like that in the dark is never a good idea.”

A spokesman for the Coastguard said: “At just after 8.40am this morning, HM Coastguard received a report that a distressed whale had been found in shallow water at Ardersier, close to Inverness, in Scotland.

“Coastguard rescue teams from Nairn and Inverness and Cromarty were sent to the location.

“The British Divers Marine Life Rescue (BDMLR) and members of the Scottish Marine Animal Stranding Scheme (SMASS) were contacted and also attended the scene to assess the whale and monitor the situation.”