The planes took part in an operation to save a sailor in distress off the coast of Scotland. 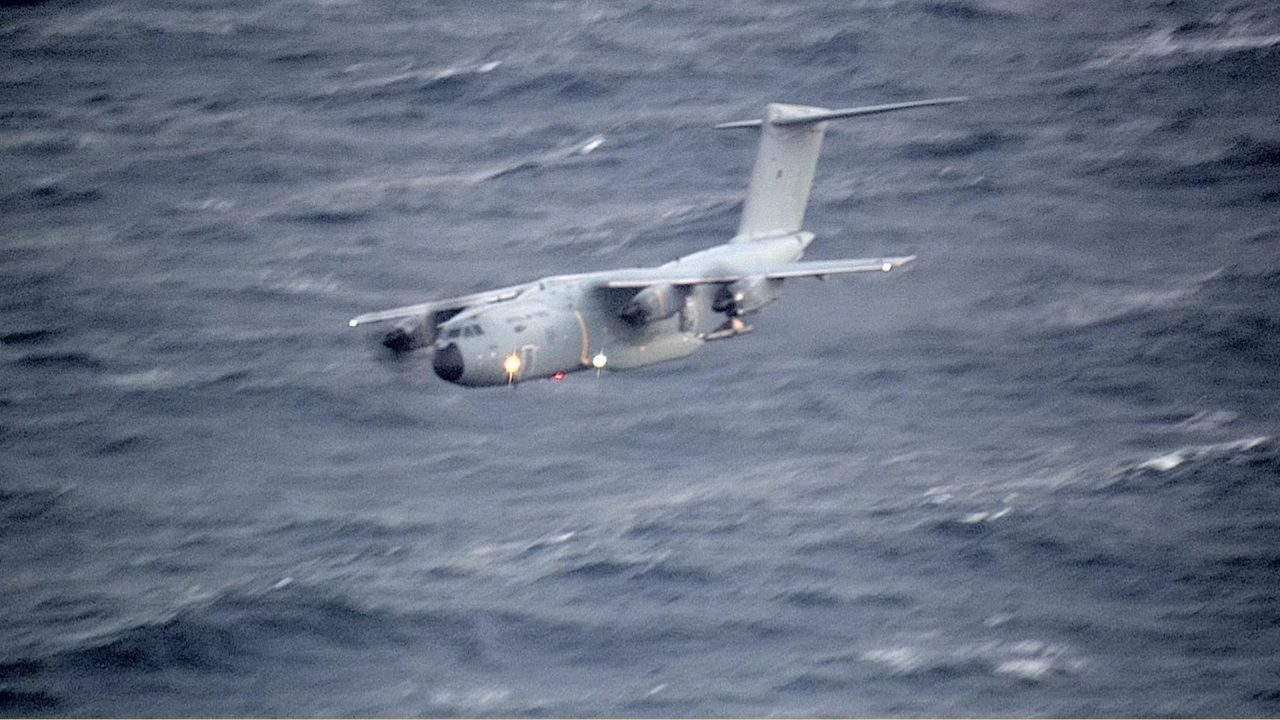 Two RAF aircraft were involved in the rescue of a stricken sailor from the Atlantic Ocean after his yacht lost its mast in stormy conditions.

A Poseidon P8 from RAF Lossiemouth, which is known for hunting submarines under the water, and an Atlas A400M aircraft from RAF Brize Norton, were tasked in the rescue of the distressed sailor whose ship had lost its mast.

The ship was struggling in waves higher than 19ft, off the coast of Scotland and midway between the UK and Greenland on Saturday.

They then coordinated with the Atlas from LXX Squadron, enabling it to visually check the area and locate the yacht.

The P-8 then made radio contact with the sailor confirming that he was uninjured.

The Atlas dropped their Air Sea Rescue Apparatus (ASRA) to the yacht through a rear ramp drop, where it descended via parachute.

It was the first mission where the the ASRA equipment could be used in action.

The rescue pack was retrieved by the yachtsman who remained under the watchful eye of the Poseidon aircraft while the Atlas returned to RAF Brize Norton.

The Poseidon was subsequently used for a second mission overnight on Saturday to assist merchant vessels, which travelled 120 miles off their planned route to recover the sailor.

The vessels arrived alongside the yacht on Sunday morning.

The sailor was recovered by one of the vessels and is now being treated for minor injuries.

The Atlas captain, Flt Lt Mainwaring described his enormous sense of relief at a successful rescue.

He said: “The team at RAF Brize Norton was simply superb, it really felt like they were propelling us into the air with a shared sense of purpose and mission.

“Similarly, knowing the Poseidon was on station provided not only a huge amount of additional capability but also re-enforced that the RAF team was collectively working to rescue this stranded individual.”

He continued, “There was huge relief when we confirmed the location of the yacht. There was a sense of purpose as we prepared to release the rescue equipment because you only get one chance to get it right. Seeing the yachtsman recover the equipment we dropped was brilliant.

“I am incredibly proud of Team Atlas today, with the whole force helping to deliver emergency equipment at very short notice and under challenging conditions. It is a timely reminder of why we hold constant readiness and of the tremendous reach and capabilities of the Atlas aircraft.”

Wing Commander Livesey, OC CXX Sqn, P8 Poseidon said:  “The power of the weather once again highlighted the importance of a meaningful search and rescue capability. It was excellent having Poseidon working together with Atlas dropping stores to the stricken sailor.

“Co-operative events such as these demonstrate the way crews from across the RAF can work together to deliver great effect.

“At RAF Lossiemouth, this is a daily occurrence as the team deliver quick reaction alert with Typhoon, Maritime Patrol through Poseidon, and a continuous tempo of support to global operations.

“It was great to see Team Lossiemouth rising to the occasion responding rapidly and professionally at very short notice. As a result, our efforts helped save a life; we all remain immensely proud of the contribution we make to keeping this nation and its people safe.”