Close-knit communities in the West Highlands have been left 'devastated' following a series of incidents on Wednesday. 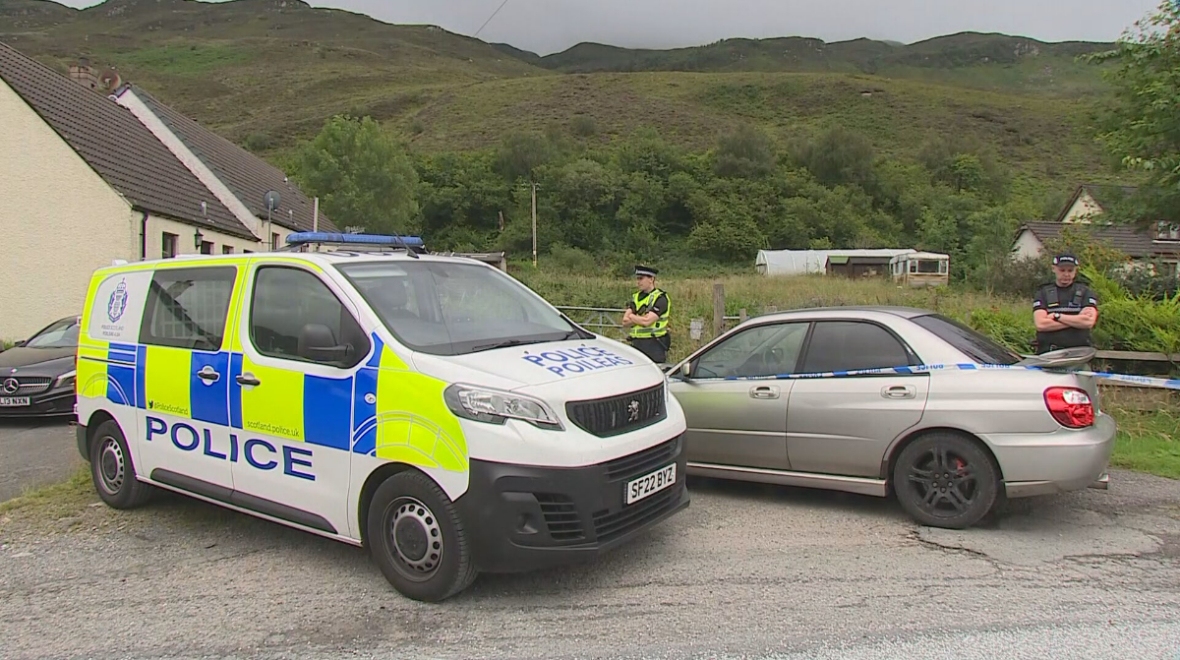 Communities across the West Highlands are in mourning after a 47-year-old man was killed and three people were left in hospital in a series of shootings across the region.

A 39-year-old man has been arrested in connection with the incidents after a dozen police cars including armed response units and the force helicopter were deployed.

Emergency crews initially responded to reports of a 32-year-old woman being injured at a property in Tarskavaig on Skye shortly before 9am on Wednesday.

A second incident in Teangue left the man dead at the scene before another “firearm discharge” in Dornie on the mainland.

The woman was airlifted to the Queen Elizabeth University Hospital in Glasgow.

A man has been taken to Raigmore Hospital in Inverness for treatment to serious injuries and a woman was taken to Broadford Hospital following the incident in Dornie.

A fourth person, believed to be the suspect, is also being treated at Raigmore Hospital.

One neighbour told STV News how they heard “gunshots” and saw a man being marched towards an ambulance with bandages wrapped around his head.

“The whole situation is just horrific and tragic,” they added.

“We heard an initial two gunshots and then three more, it looked like the police were chasing someone up the hill before they were marched back down towards an ambulance. They had a bandage on their head.”

Scotland’s Charity Air Ambulance was dispatched from Aberdeen to aid in the response.

Police Scotland said the probe was at an early stage but added there was no further threat to the public.

A Scottish Ambulance Service spokesperson said: “We received a call at 09:02 to attend an incident in Tarskavaig, Skye.

“Four patients were transported to hospital: two to Raigmore Hospital, one to Queen Elizabeth University Hospital and one to Broadford Hospital.”

The attacks have shocked the isolated, yet close-knit community in Skye and Lochalsh.

Hamish Fraser, chairman of the Broadford and Strath Community Council, said: “I’m shocked that such an incident has taken place in our island and within our close communities here.

“Our immediate thoughts are with those who have been immediately affected by this terrible tragedy and broader communities who have to live with that over the next few years.

Kate Forbes, the Scottish Government’s finance secretary and local MSP for Skye, Lochaber and Badenoch, added: “This appears to be one of the worst days that I can recall in the history of Skye and Lochalsh, and I can only hope we never see another day like it again.

“I cannot begin to imagine what the family and friends of those who have lost a loved one are going through, and they should be in all our thoughts and prayers right now.

“West Highland communities are close-knit, we are warm and welcoming, and this will shatter us to the core. It feels like our very heart has been ripped apart”

Chief superintendent Conrad Trickett, local policing commander for Highlands and Islands Division, said: “Incidents such as this are thankfully extremely rare but I understand that this will have a significant effect on the local community in these rural areas.

“I would like to reassure people that we are treating these incidents as contained with no wider threat to the public.

“There will a significant police presence in the area over the coming days and we will be working with partners to provide support to the local community. I would like to thank people for their co-operation as our investigation progresses.”

He added: “Anyone who believes they may have any information which could help our enquiries is asked to call 101, quoting reference 0713 of August 10, or call Crimestoppers on 0800 555 111.”