Specialist crews have been working to put out the grassfire near Kyle of Lochalsh since Wednesday morning. 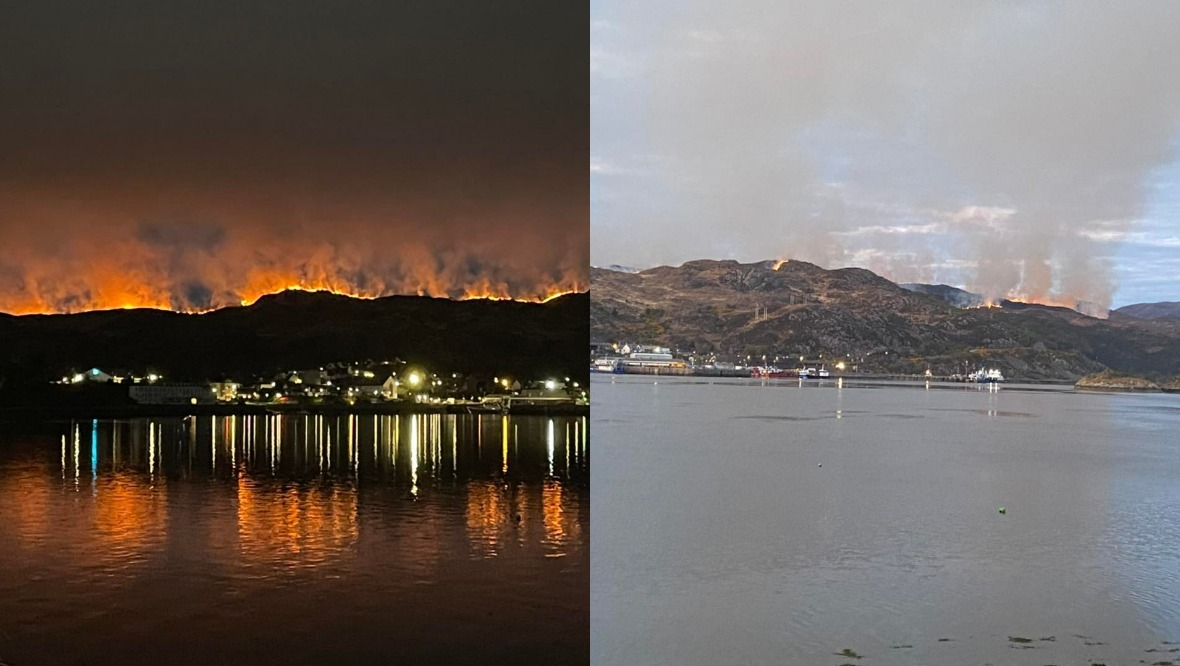 Fire crews are continuing to tackle a large wildfire near Kyle of Lochalsh in the west Highlands.

The Scottish Fire and Rescue Service (SFRS) have been on the scene since Wednesday morning after being alerted to a fire in a patch of heather.

Five appliances and two community response units remained at the scene on Thursday.

The crews are using hose reel jets, back pack sprayers, and beaters to tackle the blaze, which is said to have grown from 200 meters to over three miles long in the past 24 hours.

There is also a helicopter in attendance assisting with water bombing the affected area.

A Scottish Fire and Rescue Service spokesperson said: “We were alerted at 10.20am on Wednesday, 27 April to reports of a grass fire at Erbusaig, north of Kyle of Lochalsh.

“Operations Control mobilised four appliances and specialist resources to the scene, where crews remain in attendance as they work to extinguish a fire front of approximately three miles long.

The blaze could be seen from people living on the Isle of Skye, with footage posted on social media showing the fire burning into the night sky.

It is one in a series of blazes seen across Scotland over the past month, including one at Ben Lomond which took over two days to extinguish.

The SFRS placed a wildfire warning for the north of Scotland on April 25, 2022, urging the public to take the “utmost care in the countryside”.

The service said that March and April are high-risk months for wildfires, owing to largely dry and warm weather.

SFRS Group Commander Niall MacLennan said: “Numerous wildfires across Scotland this week, including large fires on Ben Lomond and near Mallaig have shown how real the danger of fire is in the countryside and how damaging it can be to the environment, wildlife and nearby communities.

“With rising temperatures this weekend and further dry conditions into next week, wildfires could burn and spread with very high intensity in high-risk areas.

“Therefore, we are asking people to act responsibly when enjoying the outdoors and please think twice before using anything involving a naked flame.”