Jamie Alcock took on the 12-week charity journey to Elgin to remember police officer John who died after 14 years in a coma. 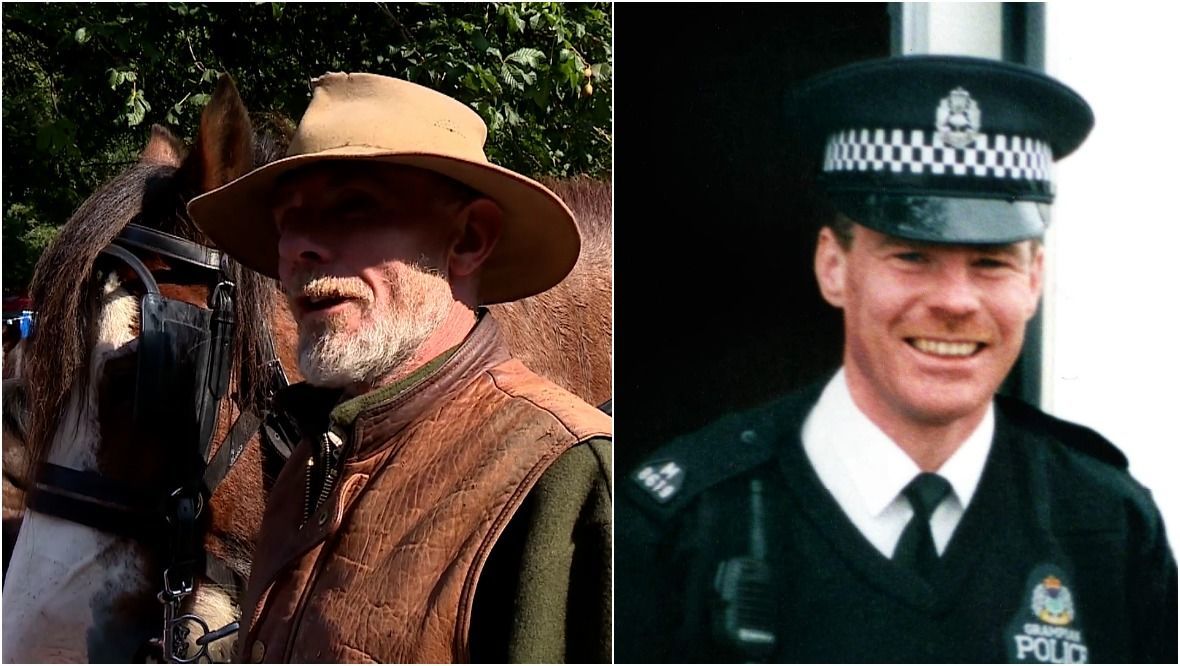 A farmer has travelled 650 miles from England to Scotland by horse and cart to raise funds for those who cared for his late brother.

John Alcock, who was involved in royal protection duties, died after 14 years in a coma. He was in a police car accident while travelling to Ballater in Aberdeenshire in 2003.

His brother Jamie has just completed a gruelling 12-week journey from his Gloucestershire home to Elgin – raising nearly £50,000 for Police Care UK and The Fire Fighters Charity.

The 55-year-old was greeted by hundreds of supporters as he arrived at the town’s Cooper Park with his two Shire horses, William and Millie.

Jamie’s charity challenge had been delayed due to an accident involving his beloved horses.

“I’d broken every bone on one side of my rib cage,” Jamie told STV News. “I’d cracked four vertebrae. I fractured my shoulder blade and suffered a collapsed lung.

“All I do know is it wasn’t the horses’ fault.”

Arriving in Moray, Jamie admitted he had mixed emotions.

He said: “There’s a sadness. I love being out on the road with the horses but mostly I’m happy.

“We’ve done what we came to do and I hope that the charities think we’ve done them proud with the money that’s been raised. But, then, that’s thanks to the general public – not myself or the horses.”

He thanked the many people who made donations, either online or in person.

Expressing his gratitude for Jamie’s efforts, David Hamilton of Police Care UK said: “The police family lost a very precious member. With what Jamie’s done here, we’ve gained a new member of the police family and for that we’re really grateful.”

Among the welcoming committee in Elgin was John and Jamie’s sister Rachel Rennie, who was delighted that Jamie had overcome horrific injuries to complete the journey.

“We never thought he would have the ability to keep going but the level he’s gone to and the pain he’s been in, and how fantastically well he’s done, words can’t describe how proud we are of him,” she said.

Millie and Willam will have an easier journey home.

Jamie said: “They’ll be transported in a lovely posh lorry and then they’re in for a decent rest, and they deserve it.”