The dolphin was spotted doing the manoeuvre thanks to drone footage being used to survey the marine mammals off the Isle of Lewis. 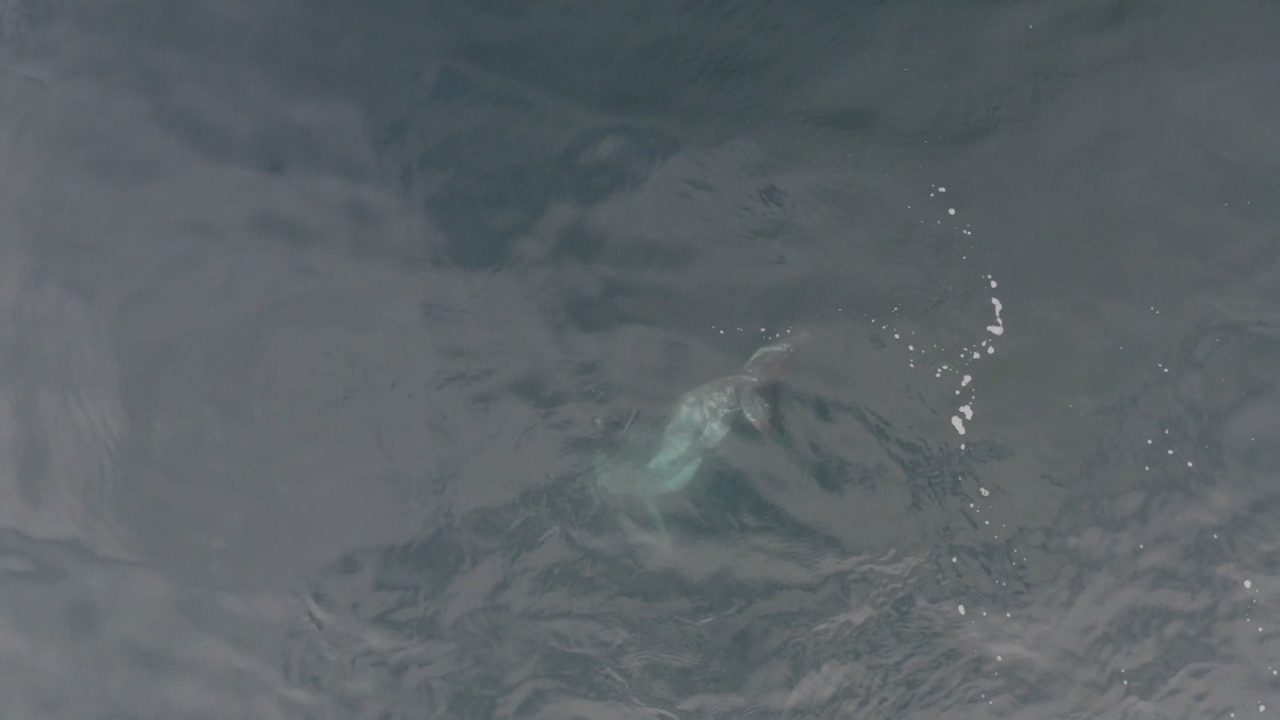 A Risso’s dolphin has been filmed performing an unusual underwater “headstand”, leaving wildlife experts wondering what it was up to.

The dolphin was spotted doing the manoeuvre – suspended vertically with its nose down, fully underwater and rotating slowly – thanks to drone footage being used to survey the marine mammals off the Isle of Lewis.

Conservationists say that while there have been sightings of the species “headstanding” in other parts of the world, those dolphin had their tails out of the water – and they have never seen a fully submerged headstand before.

Whale and Dolphin Conservation (WDC) researcher Nicola Hodgins said they did not know why the animal had been behaving in this way, though one theory is that it could have been listening for the calls of other creatures in the water.

Ms Hodgins, who is also policy manager for the charity, said it shows how little is known about the social and cultural lives of the mammals.

She said it is important to study their behaviour to understand their needs and requirements in order to better protect them and their habitat.

WDC has been monitoring the population of Risso’s dolphins, photographing their dorsal fins which are as unique as fingerprints, off the coast of Lewis for more than a decade.

The team from the charity use non-invasive techniques to study the dolphins, recording individuals from boats at a distance.

This year, they used a drone as part of their surveying – with footage capturing the never-before-seen underwater headstanding of the dolphin, which is thought to be at least 20 years old and was on its own at the time.

Ms Hodgins said: “We’ve never seen this behaviour before and we don’t really know what it’s doing. We’ve got some guesses as to what it could be.

“It could be the fact that it’s listening, just slowly listening out, and maybe that’s one of the best ways – if your head’s at the surface of the water you’re not going to hear as much as you would if you’re a couple of metres down.”

Or “it could just be chilling and having a couple of seconds’ peace and quiet”, she suggested.

“I did a bit of research, and tried to find out if this behaviour had been seen anywhere else.

“There is a term known as ‘headstanding’ which has been seen in some Risso’s dolphins, in the Mediterranean for example, but in all of those occasions the animal is half-in, half-out of the water.

“It’s fascinating to think there’s behaviours and they’ve got an entire social life we know so little about.”

The researchers are starting to piece together some information about their social life, she said, because – having photographed them since 2010 – she can recognise individuals and which others they spend time with.

But Ms Hodgins said there are no population estimates for the animals around the UK, or around Scotland.

The project that started in 2010 aims to gather as much information about the unusual-looking species – which get whiter with age as a result of scars caused by other Risso’s and their prey, squid – off Lewis.

The area is visited by large numbers of mothers and calves, and has an abundance of the Risso’s dolphin’s staple food of squid and octopus.

The evidence gathered led to the designation of a marine protected area at the end of 2020, and WDC now wants to see an effective management plan for the conservation zone.

The charity says it does not want to see local fishing such as for lobster curbed in the area, but warns large-scale scallop-dredging is damaging to the habitat.

The researchers have also discovered the species has hybridised with bottlenose dolphins and those hybrid offspring are now themselves reproducing.