Bomb squad called to WW2 mine found in Firth of Clyde

Bomb disposal experts tackled a mine containing 350kg of explosives at Ettrick Bay on the Isle of Bute. 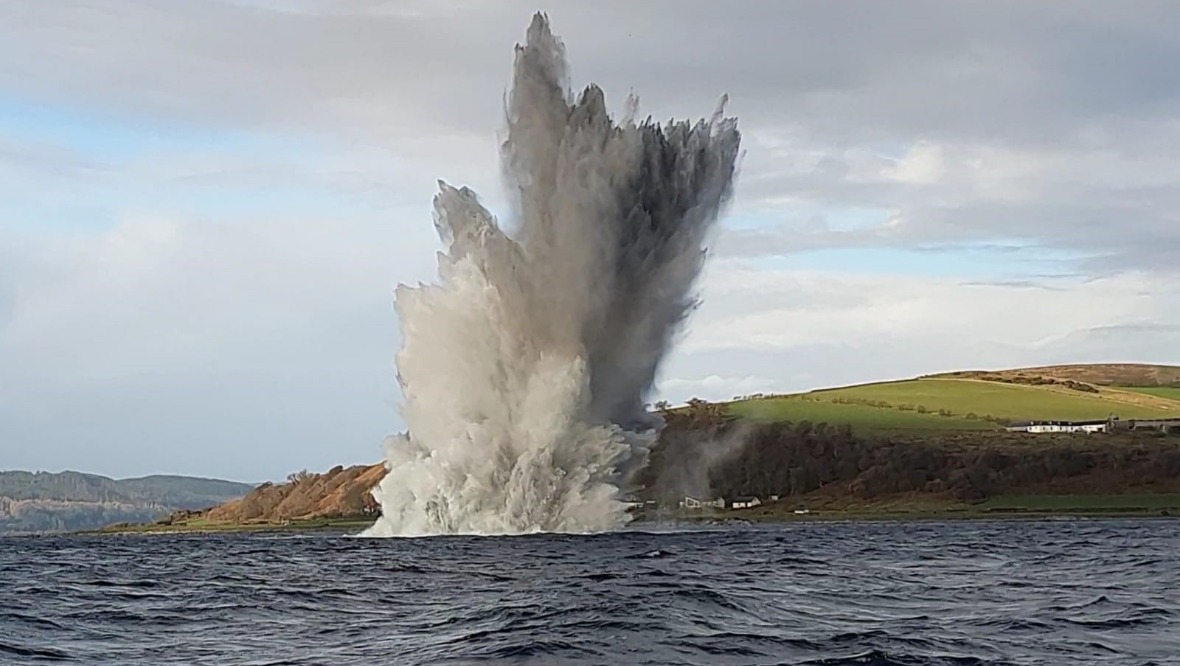 A controlled explosion has been carried out on a Second World War mine found in the Firth of Clyde containing 350kg of explosives.

Royal Navy bomb disposal experts, from the Northern Diving Group (NDG) based at HM Naval Base Clyde, were deployed after the suspected mine was discovered by a crew on a marine research boat near Wemyss Bay on Tuesday morning.

Seven crew members were evacuated by Troon Lifeboat and Rothesay Coastguard Rescue Team, while the vessel – with the suspected ordnance onboard – was sailed to Ettrick Bay on the Isle of Bute to meet with Northern Diving Group.

The item, which was described as being in “pristine” condition, was confirmed as being a Second World War German submarine-laid mine.

The NDG team coordinated the lowering of the ordnance to the seabed off Ettrick Beach and carried-out a controlled explosion to dispose of the mine on Wednesday morning.

Lieutenant Commander Mark Shaw, Commanding Officer of NDG, said: “The mine was trawled in the vicinity of Isla Craig, a small island in the Firth of Clyde. Considering it had been in the water for around 80 years, its condition was remarkable.”

“Items of this size are relatively uncommon, however, NDG are approaching 100 call-outs this year supporting civil authorities with all types of Explosive Ordnance Disposal (EOD), ranging from mines and torpedoes to hand grenades and improvised devices.

“On average, across the UK, Royal Navy Clearance Divers are tasked once a day for EOD assistance.

“This highlights the remaining presence of historic ordnance. Even small items can be unstable and present an explosive hazard; carrying-out a controlled explosion is the only safe way of dealing with them and neutralising the hazard.”