Locals have complained about wild campers leaving rubbish bags and even human waste behind at the beauty spot. 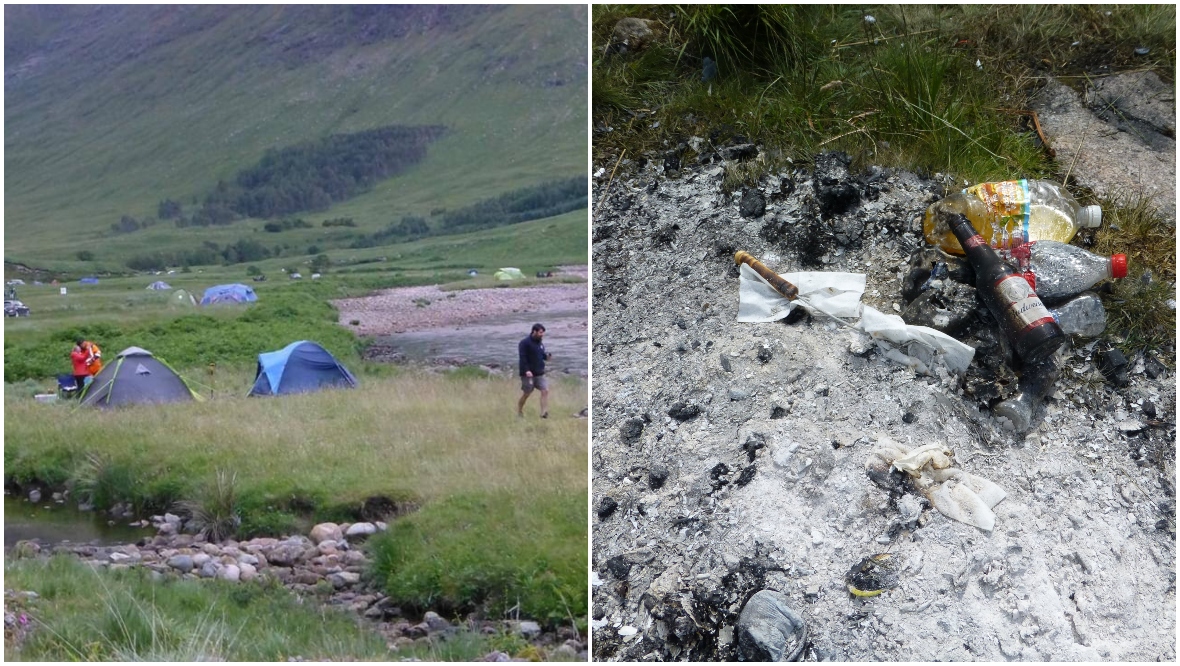 Irresponsible campers have been leaving bags of rubbish and human waste at Glen Etive.

The beauty spot in the Highlands has welcomed wild campers for years, but locals have complained at the levels of waste left behind in recent weeks as lockdown lifts.

Scott McCombie, a senior ranger and estate manager for National Trust for Scotland, said he had been left staggered by some of the damage.

“There always has been an element of people who have camped badly but it seems to be more intense just now,” he said.

“A combination of people stuck inside their house for the last three or four months with the Covid situation and everyone desperate to get back out into the countryside – but they are, or some of them, aren’t doing it too well.”

Scott is concerned about bags of rubbish, disposable barbecues and even human waste which has been left behind by some campers.

“There is no litter here other than the remains of the fire but further down there is litter, and you see people wild camping up there and they do it within the outdoor access code, and they leave no trace and you don’t know they’ve been there the next day.

“All of that is being put at risk by this element that is camping badly.”

While the area saw visitor numbers plummet due to coronavirus, they have suddenly soared as Scotland begins to ease itself out of lockdown.

Concerns were raised about the impact their return would have, with locals saying their fears have now been realised.

“There are a lot of good campers out there too, but it’s human nature to remember the bad.

“In the last couple of weeks we’ve had people pulling up in lay bys, camping and dumping human waste, leaving their litter behind, piles of rubbish including plastic bottles and food waste.

“I’ve even had people leave whole tents and air mattresses behind.”

Glen Etive isn’t the only area that has concerns about irresponsible campers.

A Scottish Government spokesperson said: “Ministers are aware of a number of incidents of littering, anti-social behaviour and damage to our natural environment since lockdown restrictions began to ease and are clear that this behaviour is completely unacceptable, and disrespectful to local communities.

“Littering and anti-social behaviour is unacceptable and it is always concerning to hear of damage caused by irresponsible campfires.

“Everyone should respect the countryside and take their litter home. Littering is a criminal offence. If you do litter you can be issued with a fixed penalty of £80 and, if prosecuted, be fined up to £2500.”

“Many are enjoying the opportunity to get outdoors after so many weeks spent close to home – and are doing so responsibly – but clearly a small minority of people are spoiling this for others, endangering themselves, nearby communities and our environment.”