What’s it like playing golf with one of the world’s best? 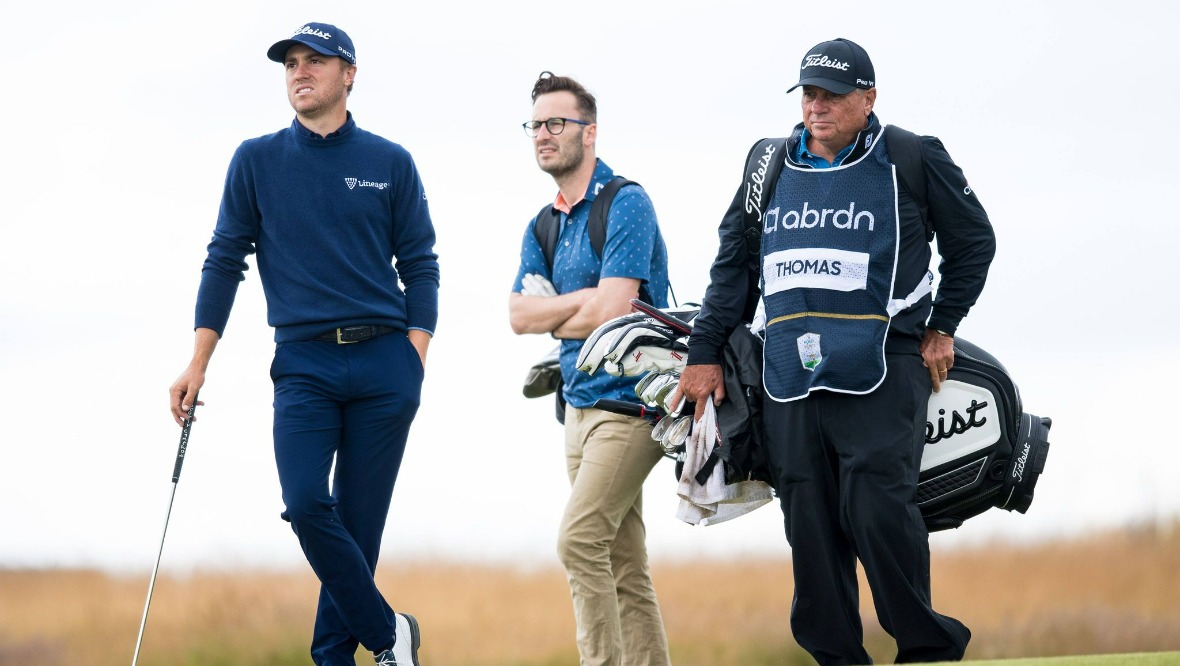 STV Sport reporter Jamie Borthwick was paired with world number three Justin Thomas in the Scottish Open Pro-Am event. Here’s what happened in his own words:

Imagine serving to Andy Murray on Centre Court, or taking a penalty into Manuel Neuer at the Allianz Arena.

How would you feel trying to pot a ball at The Crucible while Ronnie O’Sullivan watches on? Or running up to bowl at Ben Stokes at Lords?

Those were the level of nerves I was feeling as Justin Thomas – major winner, USA Ryder Cup star and world number three golfer – breezily leant on his driver and watched me tee off on the first hole at The Renaissance Club in North Berwick.

It was not a classic strike – my ball shot right, clattering a tree and landing perilously close to a couple of volunteers.

But we were off – ‘Team JT’ in the Scottish Open Pro-Am competition.

I had kindly been offered a place in the field by Visit Scotland, the national tourism body and one of the Scottish Open’s sponsors, as one of the three amateurs paired with a professional on the eve of the tournament-proper.

The days leading up to the event were filled with nerves and excitement – and plenty of practice – ahead of playing on a world-class golf course.

When I discovered we would be playing with a star like Thomas I knew no amount of hitting range balls would make much difference on the day.

The format was forgiving – the pro played their own ball round while the amateurs selected their best drive of three and played the rest of the hole from that spot. We were given shots according to our handicaps and the team posted an overall aggregate score relative to par.

After coming up just short of the green with my second shot of the day, I putted high up a ridge to my right and let the ball roll down towards the hole.

To my huge relief, the putt rolled down to within two feet of the cup and Thomas – noted as one of the best in the sport around the green – gave me the par.

“We don’t putt those on my team – great shot Jamie,” he said, and my jitters melted away.

The most enjoyable factor was just how relaxed it felt. Thomas is a naturally amiable character – we talked golf, Scotland and all the small things you would chat about with any club player on any given day on your local course.

Naturally, we amateurs would hit some poor shots and momentarily there would a pang of embarrassment, but there needn’t have been – Thomas has played in more of these Pro-Ams than I expect he could recount, and he understood the dynamic even better than we did.

The amateurs are there to enjoy the course and be given an experience to never be forgotten. The professional can use the day to relax and get more of a feel for the venue.

Thomas’s father and coach, Mike, walked all the way round with us and was a constant source of chat, advice and insight. He would film his son’s shots for analysis work, walk down the fairways discussing his favourite Scottish golf courses, help us find stray golf balls in the rough and even hand out the odd pointer for us casual players.

Going down the 16th we asked Mike how Justin was scoring and he thought around two under par. The 2017 PGA champion barely hit a bad shot all day, but he had had some frustration on the greens.

Mike explained to us that on a practice day like this, his son would not take his usual time over shots as the mental energy required to concentrate on every stroke would tire him out before the competition began.

It was a fascinating insight into how a sportsman of great natural and physical abilities has to attain the intangible qualities – the mindset and mental application – that can elevate them to world-class level.

Above all, though, those five hours playing the venue of the Scottish Open were terrific fun; a casual golfer’s peek behind the gilded curtain of the professional arena.

And it revealed that when you’re given the chance to see past the coaching, the analysis, expert caddies, lucrative endorsements and globe-trotting glamour, the love and understanding of the sport binds together everyone who plays it, at every level.