The Englishman led Rangers to title glory in his first job in management. 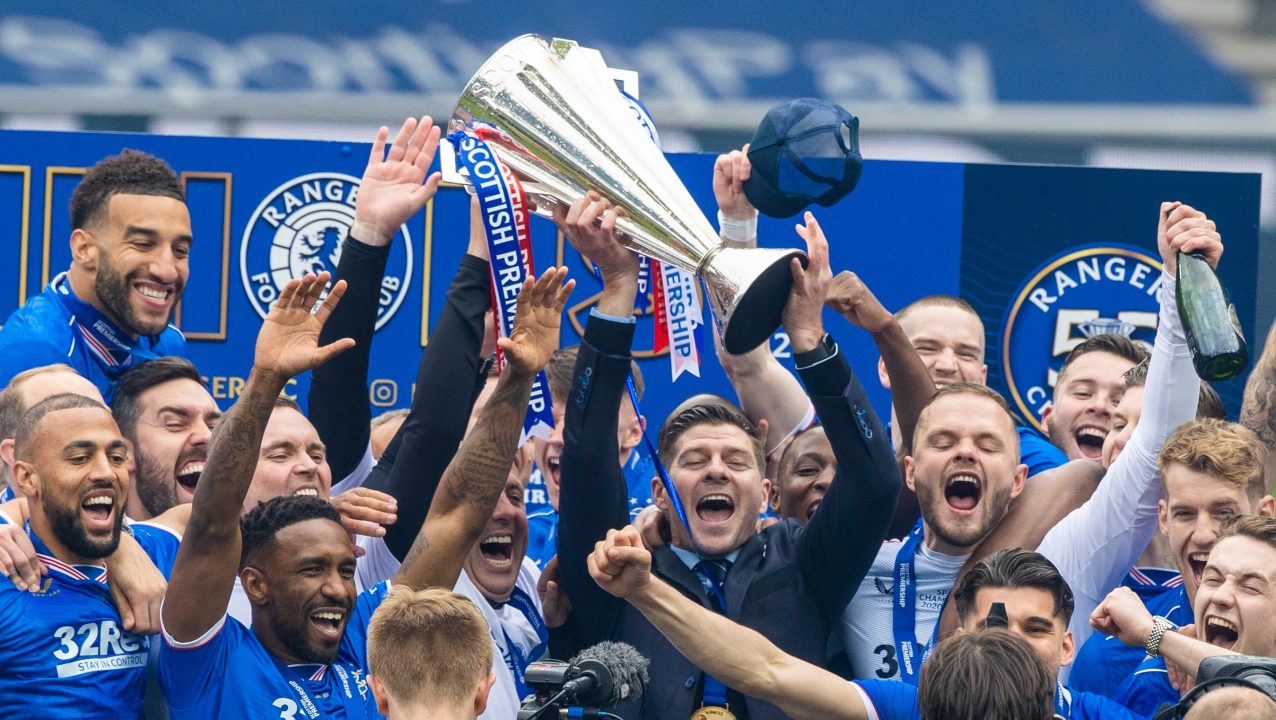 Steven Gerrard has left Rangers for Aston Villa, drawing a line under a period at Ibrox where he transformed the playing squad and led the team to the Premiership title.

The former Liverpool captain was a beginner in football management when he arrived in Glasgow and was tasked with restoring Rangers’ fortunes after a disappointing spell for the Light Blues.

We’ve looked at how the Englishman fared over his three full seasons in charge and the months leading up to his departure.

After the disastrous reign of Pedro Caixinha, the Ibrox hierarchy had placed Graeme Murty in interim charge of the team, only to remove him after poor results and put Jimmy Nicholl in charge for three games. The search for a new manager had a sense of urgency, but the club had to find the right candidate after a tumultuous season.

Gerrard was identified as the man to revive the side’s fortunes and the former Liverpool and England captain agreed a four-year-deal at Ibrox.

Despite a stellar playing career, Gerrard was untested as a manager, having just begun his coaching journey with two seasons working with Liverpool’s youth teams.

The Liverpudlian brought in a new coaching team, including Gary McAllister and Michael Beale, and began transforming the squad.

Allan McGregor made a return to the club, while Gerrard recruited Scott Arfield, Connor Goldson and Nikola Katic among others, with Ovie Ejaria and Ryan Kent both joining on loan from Liverpool.

2018-19 – European progress and lessons learned in the league, and cup disappointment

Gerrard made a strong start to life at Rangers, leading the team through the qualifying rounds of the Europa League to reach the group stage.

But a defeat away to rivals Celtic in the first Old Firm game of the season underlined the difficulty of the task ahead for the Englishman as he tried to end the domestic dominance in Glasgow’s east end.

Steady progress was made in the league over the season, and a win over Celtic at Ibrox, the team’s first derby win since 2012, gave encouragement that Gerrard and his players were learning.

Glen Kamara, Steven Davis and Jermain Defoe joined the club in January as the rebuild continued.

Second place and an eight-point upgrade on the previous season’s total were further proof that things were going in the right direction, but Celtic were nine points clear at the top.

There was to be no silverware in Gerrard’s debut season as Aberdeen thwarted Rangers’ ambition in both cups, winning a League Cup semi-final 1-0 at Hampden, and delivering a 2-0 win at Ibrox in a Scottish Cup semi-final replay.

2019-20 – Another step forward in Europe but trophies remain elusive

Having got to grips with the demands of life at Ibrox in his first season, Gerrard and his staff strengthened the squad again in the summer.

Jordan Jones, Brandon Barker and Greg Stewart arrived to bolster attacking options, while Joe Aribo was added to the midfield. Filip Helander was signed from Bologna to strengthen the defence, but perhaps the most important signing was securing Ryan Kent on a permanent deal from Liverpool after his successful loan.

Europe once again provided a positive start to the season, with Rangers easing through the first three qualifying rounds before beating Legia Warsaw 1-0 on aggregate to seal a place in the Europa League group stages for the second season running.

The league campaign began with three victories, including a 6-1 demolition of Hibs, before a 2-0 home defeat to Celtic raised familiar questions about the balance of power in Glasgow. Rangers responded by going on an unbeaten league run until January 26, stretching through 16 Premiership games, including a significant 2-1 win at Celtic Park, their first victory on that turf since 2010.

The result had added importance as it came just a few weeks after Celtic had beaten Rangers in the League Cup final, continuing their mastery of domestic competitions.

Results after Christmas were mixed, though, and destroyed trophy hopes. Hearts ended Scottish Cup dreams at the quarter-final stage, leaving Gerrard admitting it was his lowest moment in the job and hinting that he was considering his future.

A run of only five wins from ten league games after the new year allowed Celtic to pull clear. When the Covid-19 pandemic ended professional sport and forced the league to be called early, the points per game calculation was enough to be clear in second place, but short of what was needed to take the title.

The Europa League continued to be a source of pride and proof of progress. Qualifying from a group including Porto, Feyenoord and Young Boys showed an increasing ability to handle continental competition, and Braga were well beaten in the round of 32.

A 3-1 home loss in the first leg of the last 16 against Bayer Leverkusen effectively ended the run, though the exit didn’t become a formality until a 1-0 defeat in Germany five months later when football resumed.

Though Covid was throwing everything into doubt in the summer of 2020, Rangers continued growing their squad and some serious additions strengthened the group for the challenges ahead.

Ianis Hagi’s loan was made permanent and Jermain Defoe extended his stay after his Bournemouth contract expired. Calvin Bassey, and Leon Balogun were added to the defence, while Kemar Roofe and Cedric Itten offered different qualities in attack. Jon McLaughlin and the loan of Bongani Zungu completed the list of arrivals.

Europa League qualification was a little different with single-leg ties and one round fewer to negotiate, but the outcome was the same for Gerrard’s side with a place in the group stages secured for a third season running.

Strong starts in the Premiership were a mark of Gerrard’s time and the third season was no different, with a win at Pittodrie followed by 3-0 victories over St Mirren and St Johnstone.

This time there was no defeat to derail the title tilt and Rangers powered through their opposition in an unbeaten season. Only 12 points were dropped over 38 games, 102 points were amassed, 92 goals were scored and a record low of 13 conceded.

Celtic’s push for a tenth consecutive title had been stopped, Rangers had the league trophy Gerrard had set his sights on from the moment he arrived at Ibrox and his place in Rangers history was assured.

Another run into the knockout stages of the Europa League added to the manager and team’s burgeoning reputation as Antwerp were thumped in the last 32 before a contentious battle with Slavia Prague ended Rangers’ interest.

The domestic cups were the only real disappointment in the season, with St Mirren stunning Gerrard’s side in the League Cup quarter finals and St Johnstone winning a last-eight Scottish Cup tie on penalties on their own road to a historic season.

With a title to defend, Gerrard faced a different task to that in any of his previous seasons and the manager made it clear that he was intent on adding further silverware after making a breakthrough.

The summer transfer business was markedly less high-profile than in previous years with Juninho Bacuna, John Lundstram, Nnamdi Ofoborh and Fashion Sakala all arriving but without a transfer fee being spent.

The European challenge had stepped up a level, with Rangers competing in Champions League qualifying for a chance to join Europe’s top table with the prestige and financial incentives that come with reaching the group stages.

Rangers faced Malmo in their first qualifier and saw their hopes ended quickly with the Swedish side winning 4-2 on aggregate. The Ibrox side dropped into the play-off round for the Europa League, where they saw off Alashkert to reach the group stage.

Defeats to Lyon and Sparta Prague brought a tough start to the campaign proper, though a win and draw against Brondby have put progress back into Rangers’ own hands with two games still to play.

The League Cup second round and quarter-final have been negotiated with relative ease to set up a semi-final against Hibernian.

Rangers also sit top of the Premiership table as Gerrard makes his move south. Though the only defeat so far in the league came at Dundee United on the second match day, Rangers have not shown the form that saw them cruise to success last season.

The mean defence that won the title has conceded in the last six league games and Gerrard had conceded there were problems to fix in a side that had not shown the same assured and confident performances this season.

The Englishman’s successor will take over a side that has been transformed over three years, has tasted success and is in a position where it can deliver more this season. However, the new manager at Ibrox will find himself with work to do to deliver continued progress.