Search for WWII patient who wrote music dedicated to nurse

When John Duncan, a NHS Lanarkshire manager, discovered the records of a Polish patient in Hairmyres during WWII, he became fascinated by the man’s backstory.

The head of health records became intrigued after North Lanarkshire Council was archiving and protecting records of historical interest.

The team came across a piece of sheet music dated July 9 1940 which was composed by Hairmyres patient Boleslaw ‘Bollo’ Ilnicki.

The sheet music stated it was dedicated to his nurse Jean Johnstone.

The outside cover had a drawing of a map depicting a tartan Scotland along with flags of the Allies pushing swords back against the Nazis, who are depicted as an ominous dark cloud over the English channel and France.

John said: “The council archivist contacted me immediately and it really caught my imagination.

“I issued an appeal to find staff who could read music and have it recorded. I was amazed by the response.

“After a few weeks I had the recording. The music is definitely an original piece, it is a slow waltz and although quite sad it is beautiful at the same time. 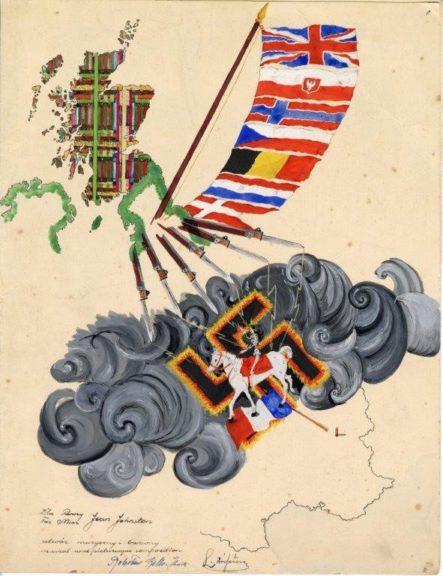 “I then issued an appeal to have the words translated and to my delight I discovered that one of my staff in the Medical Records department at Monklands is Polish and she got to work on the translation, only to find that it was written in Old Polish so she asked her Gran to help translate it.

“The song title is A Girl’s Tears and a strong theme is about duty and honour. We have two interpretations of the lyrics – either the nurse is sad about leaving the hospital and Bollo or she is sad that Bollo is the one who is leaving.

“We think it is about Bollo having to return to Poland or mainland Europe to join the war effort.

“By now I was becoming more and more intrigued, some say obsessed, by the whole story and I started to research ‘our’ Bollo.

“Our archivist found a picture of him dated 1937 along with another piece of music he had composed but nothing that was dated post war.”

John contacted the Glasgow Polish Society to see if they had any records or information about Polish patients.

They were able to tell him that Bollo was not in the Polish Air Force or Navy nor was he an Army Officer, however they did think they could trace him to London where he owned an antique shop on the Finchley Road.

If it is indeed the same Bollo, then he was married in October 1947 and died in St Mary’s Hospital Paddington in 1979.

As yet, John can find no trace of any descendants to reunite his family with the song.

John added: “I have learned a bit more about the fate of Polish people during the war, musicians and entertainers like Bollo, who stayed behind in Poland, were made to entertain German Officers in clubs while at the same time they served in the resistance movement.

“In fact the lyricist on the other work by Bollo did just that.”

John considers the song to be very poignant due to the anniversary of VE day and the challenges and losses experienced by the NHS due to the current pandemic.

While John’s search for Bollo continues, the story of the nurse, Miss Jean Johnstone, has yet to begin.