Walter Smith was one of the most successful Scottish football managers of all time. 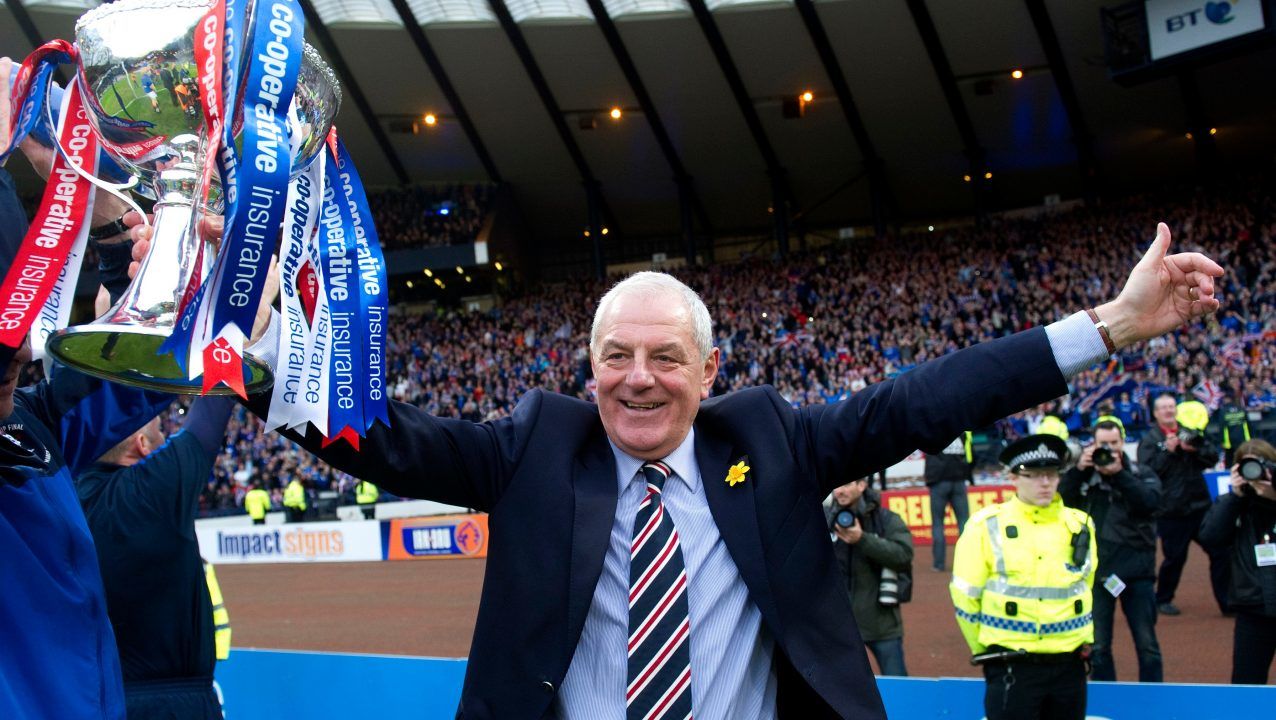 Walter Smith, the former Scotland and Rangers boss and one of the most successful managers in Scottish football history, has died aged 73.

Smith’s career in professional football spanned 45 years, taking him to international level and cementing a position among the elite of the club game.

As manager of Rangers over two spells, he won ten league titles, five Scottish Cups, six League Cups and guided his side to the UEFA Cup final in 2008.

Smith was also awarded an OBE in 1997 for his services to association football.

Born in Lanark in 1948, his football career started in earnest when the defender signed for Dundee United in 1966 after a spell in Junior football. Smith played for the Tannadice club over two spells, and also had two years at Dumbarton, the highlight being a Scottish Cup final appearance in 1974.

By the time he hung up his boots in 1980, Smith had already begun a coaching career that would far surpass the success of his playing days.

Starting out at Dundee United under the guidance of Jim McLean, the young coach combined his duties at Tannadice while working with Scotland’s Under-18 team. He was alongside Andy Roxburgh when Scotland won the European Youth Championship in 1982, the country’s first international title at any level.

His growing reputation as a coach grew and he was appointed manager of Scotland’s Under-21 side, and then acted as Sir Alex Ferguson’s right-hand man at the World Cup in Mexico in 1986.

That year brought another pivotal moment in Smith’s career, when he moved to Ibrox to become assistant manager at the club he supported as a child. Acting as assistant to Graeme Souness, he was a central figure in a dramatic and impactful time at the club and in Scottish football as Rangers brought in high-profile players from England and targeted success at home and abroad.

Smith was alongside Souness as Rangers won three league titles and four Scottish Cups and, when Souness suddenly left Glasgow to return to Liverpool in 1991, the Ibrox club made the decision to elevate the assistant to the top job. It would prove to be a move that delivered one of the most successful spells in the club’s history.

Under ambitious owner David Murray, Rangers spent big and won big. Smith signed a number of the best players from across Scotland and supplemented them with stars from across Europe, including Alexei Mikhailichenko, Brian Laudrup, Basile Boli and Paul Gascoigne.

Rangers had won the previous two titles under Souness, and Smith delivered seven more, dominating the domestic game as Rangers equalled rivals Celtic’s record of nine successive league trophies. Three Scottish Cup wins and three League Cup wins in that time added to the trophy haul, but Smith’s tenure was also marked by some big moments in European football, including a run in the 1992-93 Champions League that saw them beat English champions Leeds United and go unbeaten in the group stage, missing out on a place in the final by a single point.

Smith stepped down in 1998, his final season seeing Celtic win the league title on a dramatic final day, and Rangers lose to Hearts in the Scottish Cup final.

He returned to management shortly after his Ibrox departure, succeeding Howard Kendall at Goodison Park. Though his four years in charge didn’t bring success, Smith was a steady hand at the wheel as spending at Everton was restricted while rival clubs splashed the cash.

After leaving the Toffees, Smith had a brief spell at Manchester United, reuniting with Alex Ferguson as assistant at Old Trafford, but he was soon to return to front-line management.

Scotland needed a change of direction after the tumultuous Berti Vogts era and Smith answered the call, taking the manager’s job in 2004. Though the team missed out on qualification for the 2006 World Cup, the Scot brought marked improvement to the side and a climb up the world rankings was proof of his success.

Smith and Scotland were part-way through the Euro 2008 qualifiers when Rangers asked him to return to the club in January 2007 after Paul Le Guen left Ibrox.

The second spell at Rangers saw Smith underline his iconic status with the Rangers support. Three further league titles, three League Cups and three Scottish Cups added to his formidable trophy haul, but a European run against the odds was the highlight in 2008.

Smith’s side began the season in the Champions League but could only finish third in a group that pitted them against Barcelona, Lyon and Stuttgart. That brought the consolation prize of a place in the knockout stage of the UEFA Cup and Rangers took on that challenge and excelled.

A disciplined side with a miserly defence saw off Panathinaikos, Werder Bremen, Sporting Lisbon and Frioentina, conceding only one goal along the way, to reach the final.

At the showpiece match in Manchester, Smith’s side came up against Zenti St Petersburg, but fell short in a 2-0 defeat.

Smith retired in 2011, having amassed 21 domestic trophies as Rangers manager, second only to Bill Struth in terms of silverware at Ibrox and with his prominent place in the club’s history books assured.

He later had brief spells as a director and chairman at the club but also offered guidance and advice to those who came after him as Rangers boss.

Rangers chairman Douglas Park said on Tuesday: “It is almost impossible to encapsulate what Walter meant to every one of us at Rangers. He embodied everything that a Ranger should be. His character and leadership was second to none, and will live long in the memory of everyone he worked with during his two terms as first-team manager.”