Not such merry weather for Christmas Day around the world

You've probably guessed already that it's not going to be a white Christmas for us in Scotland.

It’s no secret that I’m a massive fan of Christmas and snow, but to get the two together can seem a massive ask, especially here in Scotland.

We were spoilt in 2009 and 2010 when most of us woke to thick snow and extreme cold, but since then it’s all gone a bit, meh… I cannot stand hearing Dean Martin’s “I’m Dreaming of a White Christmas” when I know it’s not going to be, and in recent years it’s been regularly skipped on my playlist on the way into work.

When I watch Home Alone I long for Christmas to actually look like that. It would also be nice to have the house too. I’m sure like many of you, I grew up thinking it snowed bucket loads every Christmas in Chicago and New York because of the movies, and the streets were like a dream, everyone wishing each other a merry Christmas as they rushed around with hat boxes dodging Santa’s ringing bells and piles of snow on the pavement.

The reality – paper bags disintegrating in the rain and trying to save your outdoor penguin set as the wind whips up to 80mph, yip I’ve been there a few times!

So, you’ve probably guessed already that it’s not going to be a white Christmas for us in Scotland, apart from on the top of the mountains in the north, although I expect most of you will be tucking into a cheeseboard in the afternoon and not climbing mountains.

While it’s disappointing that we’ll see no snow this Christmas, we’re not alone. Something I’ve noticed in the last few days is the real lack of cold air in many areas we’d normally expect it. The northern hemisphere is about a degree above normal at the moment, and the Arctic is a degree and a half above the norm.

Despite what the movies want us to believe, most of the US will have no white Christmas. Even the usual spots in Canada will struggle as a plume of warm air drifts north across North America. Chicago and New York will be around 10C on Christmas Day and Toronto 5C, which is several degrees higher than normal.

Most of Europe will not see a white Christmas unless you’re up in the Alps. It’s been especially warm for the time of year across eastern Europe and western Russia with temperatures in some areas 10 degrees above average. We’d normally associate Moscow with severe cold and snow by now, but even here it’ll be on the plus side with highs of 7C on Christmas Eve and 3C on the big day, with rain not snow.

Africa and Asia are looking warmer than usual, although there aren’t many spots here you’d normally expect snow on Christmas Day.

Now, of course we’d never associate Australia with a snowy Christmas because it’s their summer of course. I remember my gran used to get a Christmas card from her friend that lived there, and it always fascinated me that Santa was in a pair of Bermuda shorts having a BBQ on the beach next to his surfboard. Very odd to us in Scotland, but a reality for many Australians. That said, this Christmas will be remembered for the searing heat and wildfires.

Adelaide in the south will hit a high of 35C, some 8 degress above normal and inland Alice Springs will hit 43C, a usually very hot place, but still well above average.

We actually head back to the US for some comfort and joy, in the form of Alaska. This is one of the few parts of the globe where it’s actually much colder than normal. Alaska’s largest city, Anchorage will enjoy snowfall on Christmas Day with a temperature of -10C. It’s shockingly cold further inland in the city of Fairbanks where it’ll stay below -25C for Christmas and with temperatures dropping further, a high of -40C is expected on Friday. 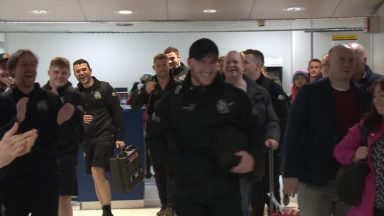