Unexplained: What happens when families and police disagree on cause of death?

Norah Connelly and Stephanie Bonner have become firm friends since the deaths of their sons - and they want answers. 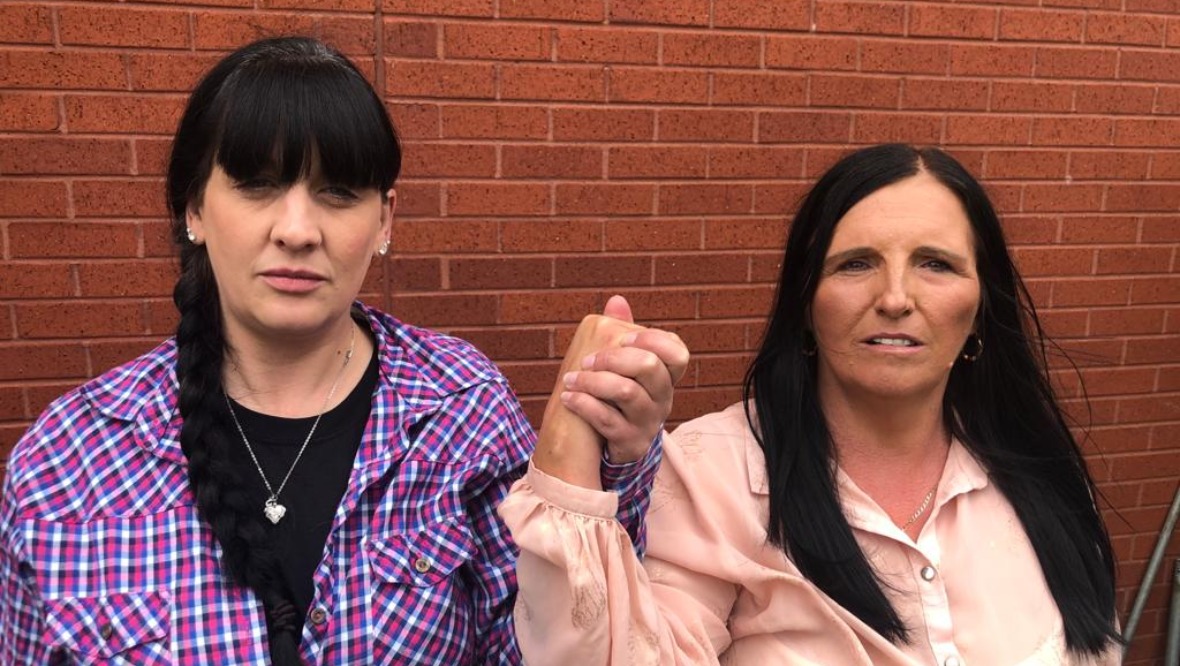 The sudden death of a child is unimaginable.

But two mothers believe they are living through something even more painful — not knowing why their sons never came home.

Norah Connelly and Stephanie Bonner have become friends; bonded by the shared tragedy of losing their beloved boys in circumstances they fear may never be explained.

Trainee chef Johnny Connelly, who had mild learning difficulties, was walking home from work when he disappeared. A week later, the 28-year-old’s body was recovered from a canal.

Norah and Stephanie are convinced some people know what happened and have vowed to never give up until they get justice for their sons.

With the first anniversary of their deaths this month, the grieving mums spoke with Kelly-Ann Woodland for a Scotland Tonight report to be broadcast on STV at 7.30pm on Thursday.

Stephanie said: “He was a big gentle giant. He loved life. I’ve got his ashes but I’m never going to do anything with them until I’ve got answers.”

Norah said: “Help me get a wee bit of closure. If my son’s death had been an illness or an accident, I could grieve naturally. But I can’t grieve until I get some peace in my heart.”

Rhys Bonner’s badly decomposed remains were found semi-submerged in marshland on the outskirts of Glasgow’s east end. He had no obvious reason to be there. He had no shoes or socks on and was naked from the waist down.

Mum Stephanie believes someone was either directly responsible for killing Rhys, was involved in somehow causing his death or, at least, knows what happened.

She and her family are highly critical of Police Scotland and have made an official complaint. 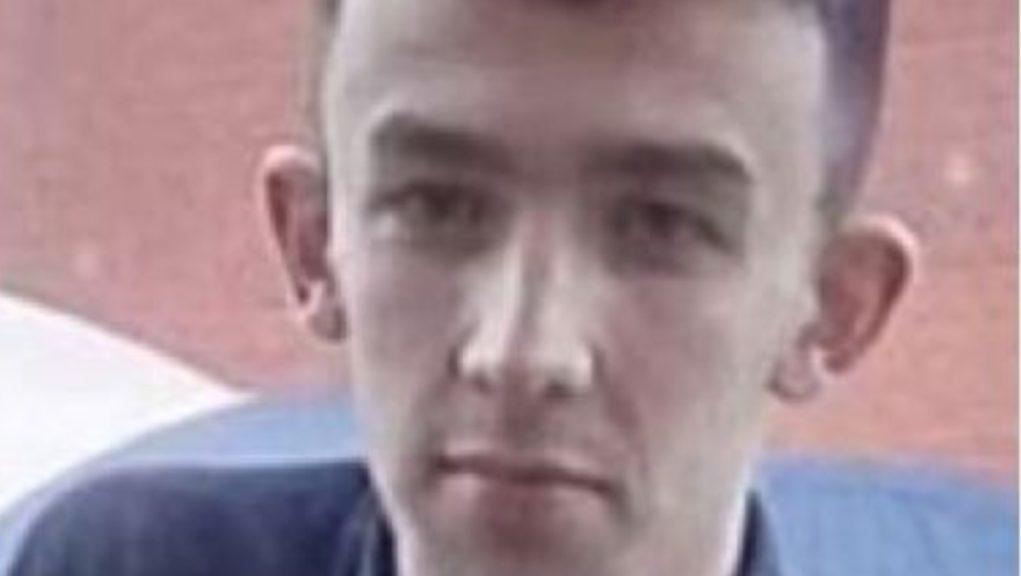 Rhys Bonner’s family have been highly critical of the police.

When Rhys did not return home, Stephanie discovered he was last seen in the company of an older woman.

His family reported Rhys missing — and shared their concerns — but felt Police Scotland were dismissive. A year later, the family’s opinion has sunk even further. All trust has gone.

Using their own initiative, the family secured CCTV of Rhys and learned he had been with the woman a few miles north of their home in Barlanark.

A witness spotted them on a path behind modern, red-brick houses on Blacader Drive in Gartloch Village, which is set in a semi-rural swathe of green on the map, belying its proximity to the inner city.

The family couldn’t convince police to search with sniffer dogs or a helicopter. Instead, they and friends mobilised to comb the dense, waterlogged expanse. 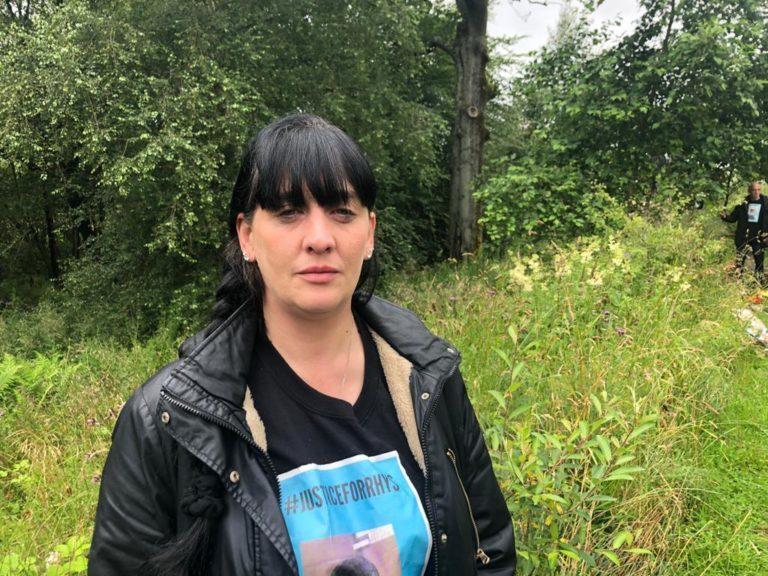 Stephanie Bonner visited the site where Rhys’ body was found.

Around a week after going missing, items of Rhys’s clothing were found in the marshland but another week passed until a police drone spotted his bright yellow Celtic top in a cluster of trees.

“How did they not find his body until a week later? Did they not search in the same area to find him that day?”

When Rhys left home he had been wearing a baseball cap. The family found it in the women’s close and handed it to police who, they say, appeared uninterested.

In their complaint, the family allege the police failed to conduct basic enquiries, before and after his body was found, and did not publicly appeal for witnesses.

For weeks, Stephanie’s parents gathered to lay flowers at the spot where they had been led to believe Rhys was found — until a local resident approached them.

Not only was the clip hugely distressing, the family realised their floral tributes were 800 feet from where his body had actually been found.

Stephanie said: “A concerned neighbour said ‘the police are showing you the wrong bit; your mum and dad are laying flowers and we just feel so sorry’.

“Every time I go to bed, that’s all I see at night, that’s my son, my wee child. It’s just devastating.”

Stephanie believes the police prematurely dismissed Rhys’s death as non-suspicious and, having done so, any potential evidence of criminality was lost forever. It also means they cannot back down.

She said: “They said it wasn’t criminal — they said that straight away. I was trying to figure out how they’re saying it’s not criminal. And when the video came, I said that’s how it’s not been criminal, because they’ve not acted, they’ve not tried to get any evidence.

“It doesn’t matter what happened to Rhys, they weren’t going to do anything about it.”

This apparent misinformation about the location of where Rhys’s was found, the “disrespectful” treatment of his body and alleged failures to secure evidence are central to the family’s complaint.

Stephanie, aged 17 when Rhys was born, says he was a “family boy” who loved basketball and would often go shopping for her and take his wee sisters to the park.

He was tall and handsome, but scared of spiders and the dark. Stephanie says he would never have gone into the area where he was found.

For Scotland Tonight, Stephanie made her first visit to where Rhys was found and appealed to anyone with information, adding: “Just don’t be scared. Please come forward and just tell me anything at all, it doesn’t matter if it’s just a wee thing.”

Chief inspector Patrick Murphy says Rhys’s death was “fully investigated” with “no criminality” established and that a report was submitted to the Crown Office.

He added: “We are in regular contact with his family to keep them updated on any new information and keeping them fully informed is a priority for us.

“A complaint about the police has been received from Rhys’s mother which is under consideration by our Professional Standards Department, therefore we are unable to comment further at this stage.”

When Norah Connelly gets up each day she has a chat with her son Johnny, who died one year ago.

She told Scotland Tonight: “Every morning I wake up and look at Johnny’s photo and say ‘maybe today’s the day we’re going to get justice Johnny’.”

The trainee chef, kids’ football coach and amateur goalkeeper had gone into Glasgow city centre one evening last July to ask his boss about overdue wages.

Having left with an assurance his pay would be deposited in the bank, he had no option but to walk home to Milton in north Glasgow.

When he did not return to Norah that night, she instinctively knew something had happened. A week spent anxiously watching every stopping bus was in vain. Then came the devastating confirmation from a police officer.

Johnny’s body was found in the canal beside the Speirs Wharf, a residential development at Port Dundas, perched above the M8 motorway and central Glasgow.

The following month, Police Scotland appealed for information, saying they believe he was injured during “an incident” in an underpass at nearby Garscube Road. They later said there may have been “some sort of altercation”.

Such was her devastation, Norah says she “wanted to jump in” to the canal, adding: “I thought my life was over. I wanted to be with my boy. Johnny had been with me for 28 years.”

Norah says that due to his learning difficulties Johnny was vulnerable, with little sense of danger. She said: “Because he was such a nice person, he thought everybody was like him. He was very trusting.”

For three months, the authorities withheld Johnny’s body before finally allowing his family to lay him to rest.

Last week, on the first anniversary of his disappearance, Norah visited the canal for the first time since the funeral. Joined by family and friends, she laid flowers and wept.

A friend gifted her a DVD in which Johnny plays Greg Hemphill’s character Victor McDade in a college production of sitcom Still Game.

Norah, who had never before seen her son’s comedy acting, said: “I’m gong to treasure that.” 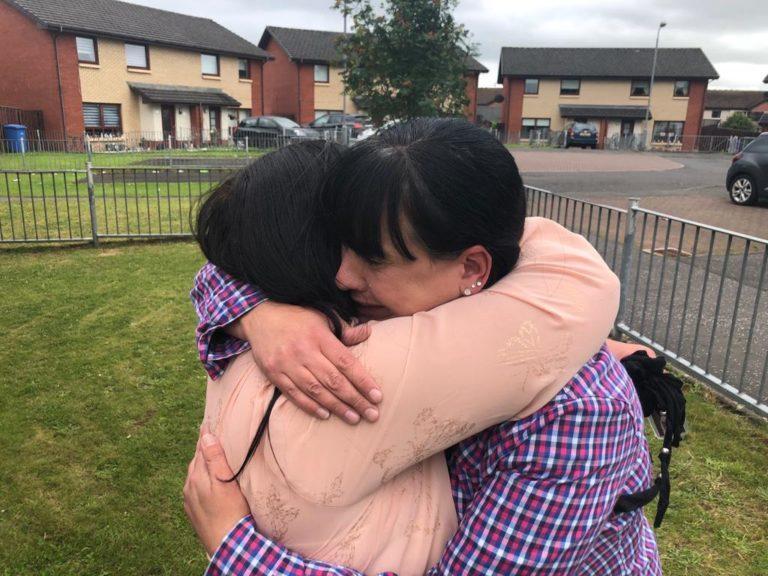 Norah Connelly and Stephanie Bonner have formed a bond.

Speaking after the emotional gathering under dark grey skies, she said: “I feel as if my son’s not at peace because he knows his ma’s not at peace. And maybe when I’m at peace and get to know what’s happened, my son will get peace.”

In January this year, police released new information in a fresh public appeal. They said three white men, aged 30 to 45 and wearing jeans and sports clothing, could have “vital information”.

Norah does not know if Johnny was attacked and fell into the canal while trying to escape or whether he was assaulted then thrown in.

She added: “I believe the people who were involved knew he was in that water and they’ve left him there. They’ve never phoned any emergency services. They’ve just walked away.

Unlike the family of Rhys Bonner, she is mostly satisfied with the police response, singling out a sergeant who attended Johnny’s funeral while off duty and left flowers at a memorial bench.

However, she struggles to understand why a blank space remains on his death certificate.

She said: “They can’t tell me how my son died. I can’t get my head around how this day and age a pathologist can’t tell how somebody died. I’m left in limbo.”

She hoped to learn more at a meeting with Crown Office officials and police officers on March 31. But it was cancelled due to coronavirus lockdown and is due to be rescheduled.

Many people have struggled with lockdown. For Norah, it was “a total nightmare”. She said: “I was sitting in that house for three months on my own with the mental torture because I’ve not got any answers.”

She and her two daughters remain cautiously optimistic that a breakthrough will come one day.

She said: “I keep praying for a miracle that somebody comes forward with information because I do believe that whatever happened to Johnny has been spoken about. There are people who do know and I plead with them — please come forward.

“I could be your mother sitting her today. Your mother would want justice for you. It’s a living hell. He was a good boy who never deserved that.”

Radiating maternal love and pride, she added: “He’ll never be forgotten. Johnny touched a lot of people’s hearts when he was living and he’s still touching people’s hearts today. That’s the kind of boy he was. Once you met him you never forgot him.”

Police Scotland say their investigation is ongoing. Detective Inspector John Morrison added: “A team of officers continues to work on the John Connelly inquiry and we are in close contact with his family, who are kept up to date with any relevant developments.”