Life on the frontline in Scotland’s fight against coronavirus 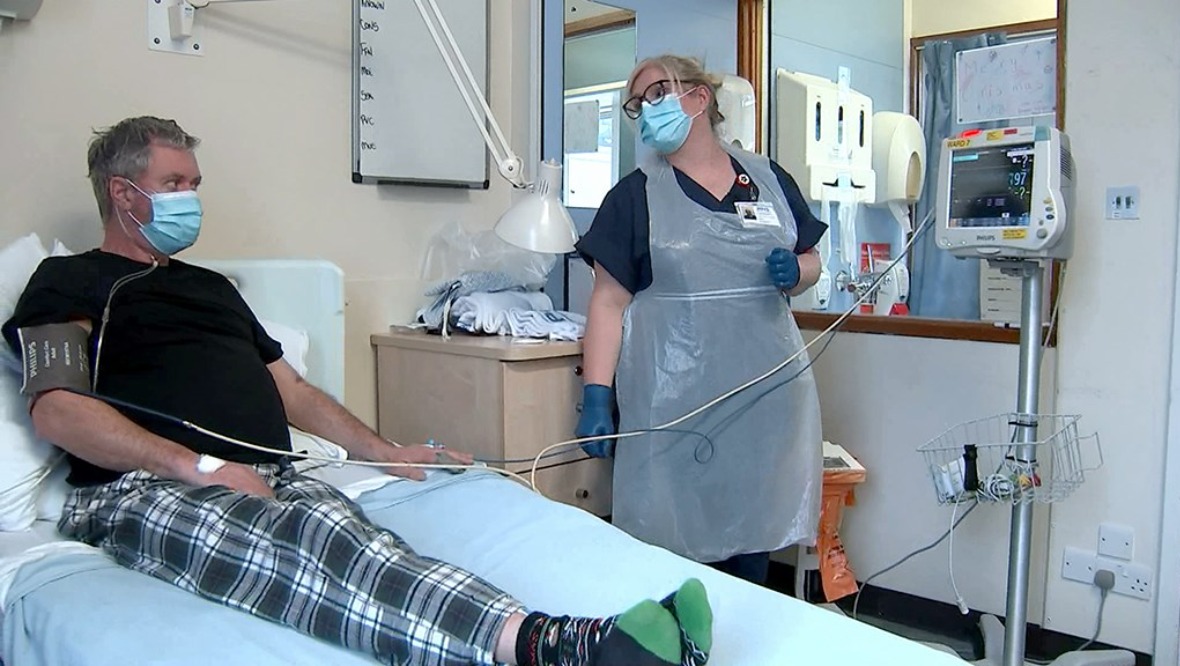 By Ewan Petrie and Kevin Scott

Mark Simpson went into hospital on Tuesday after experiencing difficulties with his breathing.

Just hours later, he was transferred to the high-dependency unit at University Hospital Monklands in North Lanarkshire.

His entire family tested positive for Covid-19 over the festive period – ten members in total.

And Mark is just one of the 1860 people who are currently being treated in hospitals across Scotland, including 141 in intensive care, as of Friday.

Hospital staff are living in fear of what is to come next, with Covid admissions predicted to escalate even further in the coming weeks.

Workers at Monklands, in Airdrie, told STV News the virus was taking a huge physical and mental toll on their wellbeing.

She said: “I’ve gone home from work and cried so many times and I’ve thought ‘is nursing really what I want to do?’.

“And then I come in (to the hospital), we’re a great team, it’s like an extended family, so we all get each other through the shifts.”

Emergency medicine consultant Carole Neff agrees and says it won’t take much more to push the health service “over the edge”.

She said: “On a very busy shift, when there’s maybe waiting times of up to seven hours, sometimes that would make you feel a little bit ashamed.

“I feel that we are on the brink of moving into possibly the most stressful time of our working careers.”

Doctors and nurses are pleading with the public to take the restrictions seriously to help prevent services from being overwhelmed.

It’s a message that Mark is now all too happy to amplify. His wife has also tested positive for Covid-19 and his wife’s stepdad died over the Christmas period with the virus.

“We probably don’t appreciate just what this disease does to you because I’m relatively fit, (in) my early 50s,” he said, adding that he felt his breathing was getting shallower in the days leading up to his hospitalisation.

“You see it on the television, you read about it and you hear about it, but you don’t probably appreciate just how it can affect you.

“My daughter came in and said ‘just to put you in the picture, we’ve got a couple of options here, you might need to go onto the full oxygen and the way your breathing is just now, we might need to put you to sleep’.

“At that point, that’s when I kind of realised this is more serious than we even think it is”

NHS Lanarkshire said earlier this week it was suspending all non-urgent elective procedures and a range of outpatient appointments to focus on Covid-19 inpatients and emergency care.

The health board said nearly 300 people are currently being treated for coronavirus in its hospitals, with only 46 free beds left.

The suspension is due to last for four weeks.

NHS Ayrshire and Arran has also postponed all elective surgery due to the rising number of coronavirus cases.

Dr Rory Mackenzie, chief of medical services at Monklands, said the NHS had “never seen anything like this before”.

“We’re having to take down all planned care that we wouldn’t normally do. So these are unprecedented times, I think everyone realises that.”

And the staff at Monklands hope people heed the warnings to help avoid the system being overwhelmed.

“It’s definitely hitting people a lot harder this time than it has before,” said senior charge nurse Kenny Watt.

“Capacity could be a problem in the next coming weeks and if we don’t try and minimise the amount of people contracting the virus, spreading the virus, we could be in a situation where we’ll struggle to cope.”