Junior docs: ‘Covid patients our own age give us a shock’

Junior doctors are being hailed as unsung heroes of the crisis, but here they describe the brutal reality on the frontline. 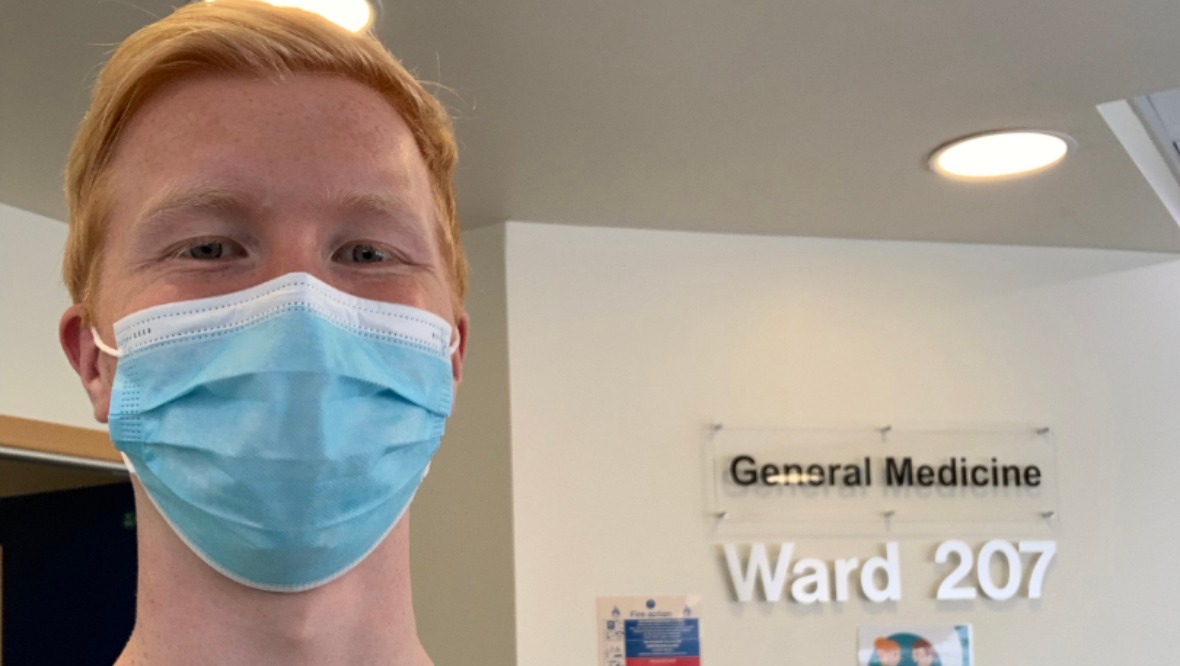 It has been almost a year since 121 junior doctors graduated early to support Scotland’s biggest health board in its response to coronavirus.

Junior doctors were also placed at other NHS health boards across the country.

STV News has followed two doctors as they embarked on the start of their careers.

Ruaraidh Campbell’s career started abruptly when he returned from volunteering in Samoa to help the NHS in the fight against coronavirus.

His graduation date was pulled forward by two months, and soon after he started on the wards.

Since March, Ruaraidh has worked on the respiratory and orthopaedic wards, and the high-dependency unit.

“We’ve often seen not just one person coming in with Covid, but multiple people close to them.

“It can often mean that multiple family members or friends can all get very sick at the same time. And unfortunately, when people do pass away, that can be really, really tough.

“Sometimes we’re dealing with situations where relatives are passing away in very short time spaces. That can feel very difficult and you come home and you think, ‘well, this could be my mum and dad, this could be my granny and grandad’.

“When you think about that, when you put yourself in the other person’s shoes, it can feel quite heavy at times.”

One of the things that has shocked Ruaraidh the most is the age of some of his patients.

He says: “Another really difficult thing is seeing patients who are approximately our age, who despite being young and fit are very unwell with Covid.

“That always gives you a bit of a shock.”

Senior consultants say it has been the “most challenging year” junior doctors could have had.

“We’ve had to deal with more death and dying than you usually would,” Ruaraidh said. “But more than that it’s dealing with it in a different way.

“With some visiting restrictions that unfortunately had to be in place because of the pandemic, it’s meant you often have to give tough news or deal with patients and families over the phone.

“I always find breaking bad news difficult. It’s an incredibly personal moment and you have to properly prepare for it. Because, however tough it is for you, it’s tougher for the person listening.

“It can be really difficult to speak frankly and honestly and lay out the facts, because you feel like you’ll hurt the person if you do that. But in most cases by being open and honest, that’s an empowering process.

“I remember the first time doing that, having to speak to a patient’s family and say that it’s not good news. I remember caching myself, when they asked me the question ‘is my relative going to die?’.

“It’s a tough question to answer, you need to compose yourself and say ‘unfortunately, yes but this is what we are going to do to make the person comfortable’.

One of the main problems facing junior doctors is staff illness, with many requiring time off to self-isolate while others work extra shifts to fill the gaps in the rota.

Ruaraidh caught the virus at work.

“I had Covid myself and it really took it out of me,” he says. “Especially for someone who is pretty fit and healthy. I take care of myself and work out most days. It hit me much harder than I thought it would. It was quite nasty and I’ve been quite tired and breathless since.”

Having only worked in Glasgow for a matter of months, Ruaraidh is looking forward to getting to know his new colleagues over a beer when restrictions ease.

“Junior doctors work long hours and shifts can be tough emotionally and physically and when you have time off you value that,” he says.

“It’s been hard outside of work. Because you do a difficult job, there’s this old adage about ‘work hard play hard’ – and I don’t think that’s 100% true anymore, but it speaks to a certain truth that we really valued our time off because after a difficult long job, you want to make the most of your time off.

“And, like everyone else, we’ve struggled with not being able to see our family and our friends and to do the usual hobbies we’d enjoy. So I think that’s been quite tough on people. It’s not just the work but it’s when you come home, it’s been difficult to switch off.”

Ruaraidh’s virtual graduation was a proud day for his family. His mum and older sister are also doctors.

Although he hasn’t been able to see them, his family and girlfriend Sophie have been a great support.

“You have days that are tough, and you do see some sad stuff. And that is the nature of being a junior doctor.

“Sometimes you get home and you just need someone to listen and give you a hug if you’ve had a tough day, which we have quite often.

“I don’t know how often people in a normal job shed a few tears, but it’s not uncommon here.

“I also have my lovely girlfriend, who’s a massive support as well, she brings me back down to earth, she’s fantastic. It’s been tough at times, but that’s experience shared by many people throughout the UK.”

Annie Evans moved 400 miles from her family home in Sheffield to start as a junior doctor at the Queen Elizabeth University Hospital in Glasgow.

“It’s always going to be difficult to start as a doctor, but when you have to start in a new city, in the middle of a pandemic, when you don’t really know anyone… it was difficult,” she says.

Living so far away from home, Annie hasn’t been able to spend time with her family.

“I think my parents are proud. When I speak to my extended family as well, it’s always quite shock if you’re telling them stories.

“I don’t think anyone realises how difficult it can be.”

Annie also works as a representative for her year of junior doctors. She says an extra focus is being placed on support.

“When the number of deaths goes up, then there are more people that do die in the hospital. And sometimes that can be quite difficult, if you’re having to go in and see that, just because that’s not really why you go into medicine.

“So it can be kind of demoralising when you have to experience lots of death all at the same time.”

Doctors have raised concerns over access to training. Pressures of the pandemic have meant lectures can only take place online, and senior consultants can only do so much to mentor their junior colleagues.

Dr Colin Perry, head of education at NHSGG, agrees that there has been less access to training.

But he believes the experience of the past year will shape an entire generation of junior doctors.

“It’s been the most challenging year that they could have had,” he says.

“A global pandemic of a new disease none of us had ever seen before. And so normally when they would look to us for guidance, and I suppose advise on how to treat these diseases, we’ve had to learn with them about how this disease is developed and in the midst of all of that, this is unfortunately a disease that’s associated with a higher mortality than perhaps they would have seen in the wards.

“Certainly they have had to have deal with perhaps more difficult situations than they may normally have encountered.

“I think they will come out of this having learned a great deal very quickly. And I think that might be one of the lasting impacts of the pandemic.

“And I think that has also changed the way we look at junior doctors. We’re very aware of their needs to training and education, but we do look at them more now as able colleagues, and a great resource within the system.”