How Scotland did Berti Vogts a favour at Euro 92

The first in our two-part series looking back at Scotland's experience of the European Championships. 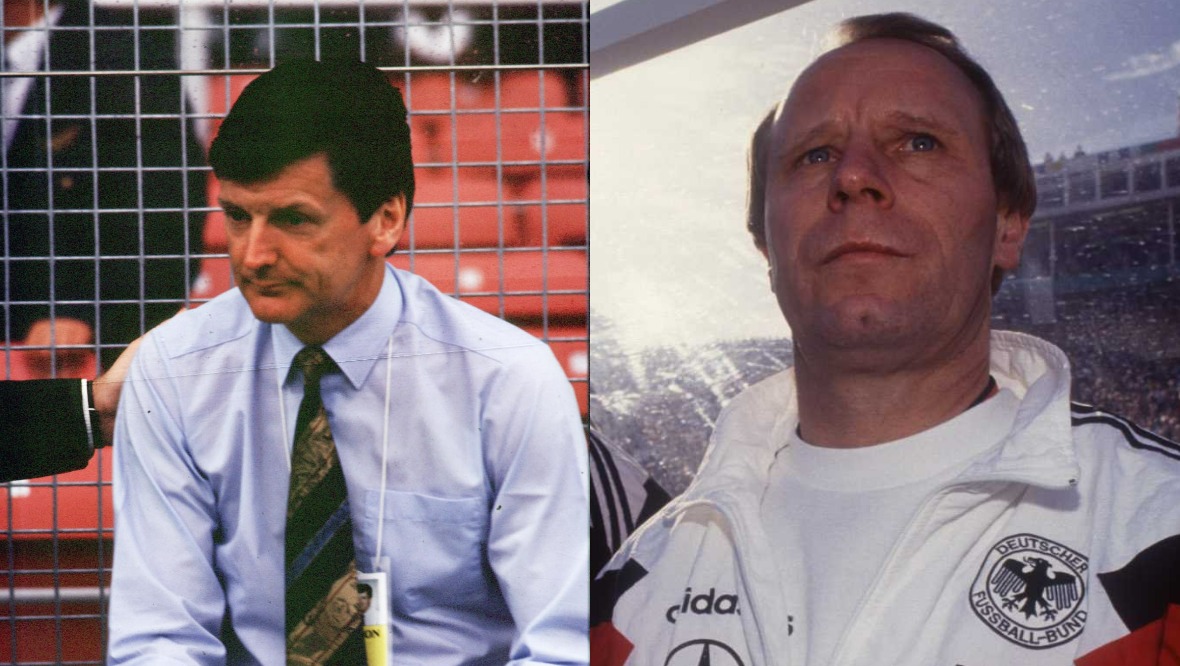 Scotland suffered a first-round exit in their European Championships debut but travelled home having won over hearts and minds.

Andy Roxburgh’s side lost their first two matches without scoring, before finishing their campaign in rousing fashion – doing future boss Berti Vogts a real favour in the process.

Here, we tell the story of Scotland and the Tartan Army’s remarkable trip to Sweden in 1992.

Qualification went to the wire

It was frustrating being a Scotland fan in the early 1990s.

Sure, there was World Cup qualification every four years, but there was an annoying habit of failing to get past the first round, and despite a couple of decades trying, the national side had never reached the European Championships.

Granted, the fact only eight teams qualified made it tricky, but Scotland’s continued absence had to be put right.

In the 1988 qualifying campaign, the national team managed to finish just two points behind the group winners, but somehow also fourth out of five teams.

The ‘92 qualifiers went to the wire as well, leaving Scotland with striker Nasko Sirakov to thank.

Andy Roxburgh’s side had been drawn against San Marino, Bulgaria, Switzerland and Romania, with the latter two the main barriers. A 4-0 win over San Marino in Scotland’s final group game had them sitting pretty, one point above Switzerland and two ahead of Romania.

The catch was that Romania still had to play Bulgaria, leaving the Tartan Army living on their nerves for a week.

The teams met in Sofia on November 20, 1991, and after Adrian Popescu put Romania in front, Levski Sofia forward Sirakov scored an equaliser. The match ended 1-1 and Scotland was heading for Sweden.

If reaching Sweden seemed tough for Roxburgh and his players, the draw was more than formidable. Scotland would face reigning champions Netherlands, world champions Germany and a Commonwealth of Independent States (CIS) team of players from the recently broken-up Soviet Union.

The Dutch squad was sprinkled with household names, led by the AC Milan trio of Frank Rijkaard, Marco van Basten and Ruud Gullit. Germany called up eight players from Serie A to bolster their home-based stars, while CIS selected players from England, Italy, Portugal, Spain, Switzerland and Scotland.

Rangers provided four players, as did Dundee United, with three each from Celtic and Hearts and Aberdeen’s Stewart McKimmie completing the 20-man squad.

Preparations were low-key, with a trip across the Atlantic for warm-up friendlies delivering 1-0 victories over USA and Canada before a 0-0 against Norway completed the build-up.

Roxburgh allocated squad numbers based on number of caps, making it easy to see that he plumped for experience over youth to face the Dutch masters. Numbered 1 through 11, the Scottish side had nobody aged under 26 and were set out to frustrate the slick movement of the opposition.

The 6000-7000 Scotland fans who had made it to Gothenburg’s Ullevi stadium didn’t see much in the way of chances for the boys in blue, bar a Richard Gough header that found the side-netting, but had increasing hopes of snatching a point as the game wore on.

Those hopes were dashed in the 75th minute. Gullit put the ball in from the right which was flicked on by Van Basten. Rijkaard rose to nod it to the edge of the six-yard box and Dennis Bergkamp slipped in to steer the ball past Andy Goram.

Scotland had no response and left the opening game without a point but having given a good account of themselves.

Must win against Germany

Tournament football is unforgiving and Scotland knew defeat in game two would mean they wouldn’t be progressing.

Roxburgh named an unchanged team, but the attitude was different with Scotland on the front foot. Again, Gough went close with a header, forcing Bodo Illgner to tip over the bar and Dave McPherson had a good chance at the back post as Scotland mounted attack after attack.

Germany had scarcely created a chance when they took the lead in the 29th minute. Jurgen Klinsmann held off Gough, shielding the ball so strike partner Karl-Heinz Riedle could fire in a shot from 13 yards.

The world champions’ second was a cruel blow, with Stefan Effenberg’s effort taking a wicked deflection off Maurice Malpas and into the net. Scotland didn’t let up, with Pat Nevin brought on to increase the supply and Gough becoming an auxiliary striker.

No goals came and Scotland’s exit was confirmed.

The performance was certainly good enough for the Tartan Army, who applauded the players as they headed to the corner of the ground to express their thanks.

And the supporters then called for Roxburgh, who addressed the fans and told them he hoped their trip had been worth it. The Scotland boss also revealed that Germany boss Berti Vogts had asked the team to “do him a favour” and take care of CIS.

How would Vogts ever repay such a favour?

Could Scotland bow out in style?

With two defeats in two games, despite taking plenty of plaudits for their performances, many might have expected a deflated Scotland to be picked off by a CIS side with everything to play for.

Legend has it that Ally McCoist told his Rangers team-mate and CIS defender Oleg Kuznetsov that the players were suffering the after-effects of too much partying, leading the opposition into a false sense of security.

Stopping on the way into the stadium to shake hands with the Swedish police motorbike escort bedecked in Scotland tops may have added to the impression that the primary mission was to make friends.

As it turned out, Roxburgh’s side were intent on leaving the tournament with at least one scalp.

Scotland roared out the blocks. Paul McStay scored the opener after seven minutes, lashing in a fierce shot from outside the box that hit the base of the post and went into the net off Dmitri Kharine’s head.

Nine minutes later Scotland doubled their lead, McClair scoring his first Scotland goal in his 26th international. The Manchester United forward took a chance from distance and a deflection sent his effort zipping low into the corner past Kharine.

CIS pressed forward to try and rescue their semi-final hopes but were thwarted at every turn before Gary McAllister made sure of the win from the penalty spot with six minutes to go.

And so Scotland left Sweden with heads held high, but a newly-found taste for elite European competition that would drive the team to return four years later…

Part two, to be published on Thursday, tells how Scotland fared at Euro 96, held just over the border in England.