‘When I woke up, I was furious I wasn’t dead… then I met Odie’ 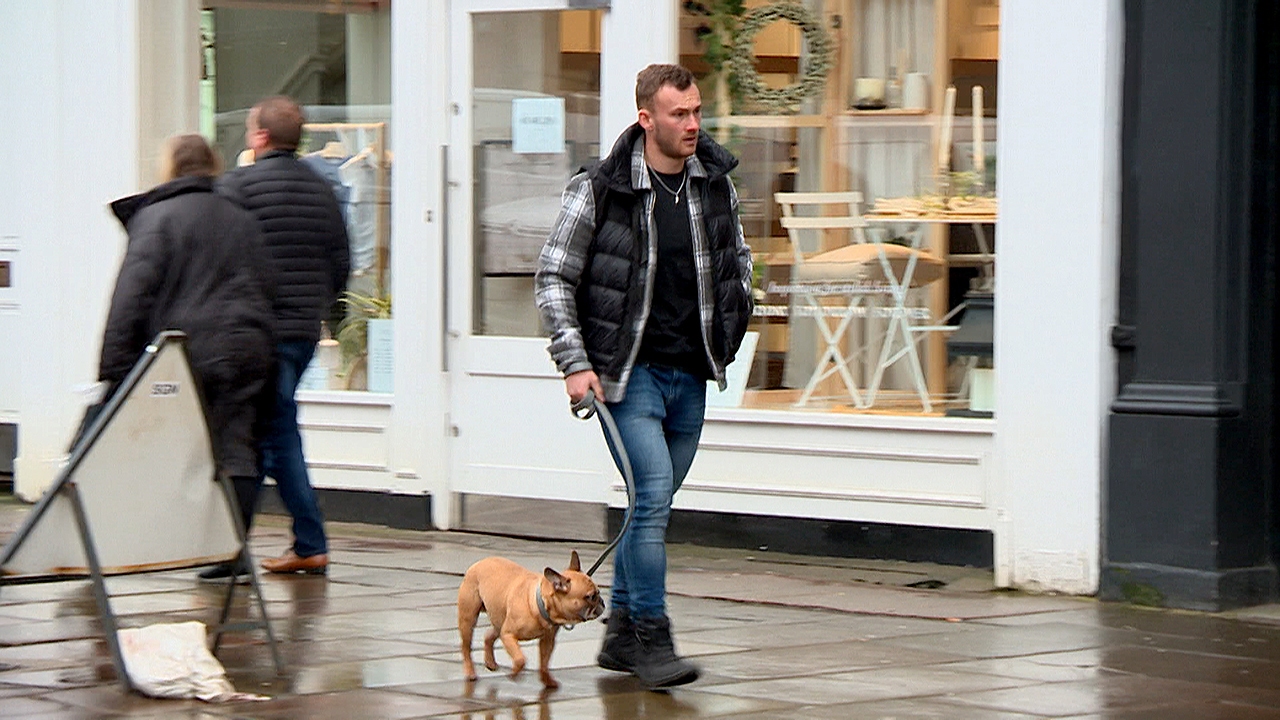 Six years ago, Fergus Crawley survived an attempt to take his own life. Since then, he’s raised more than £100,000 for mental health charities.

In his own words for Scotland Tonight, Fergus, from Edinburgh, tells how he struggled with depression and the “shame” associated with it – but also how he overcame his troubles with the help of his dog, Odie.

One of the things I still struggle to process is that when I came around, the first feeling I had was one of failure. Not because I’d attempted suicide, but because it hadn’t come off.

I was furious that the one initiative I’d taken to improve my state of mind had not worked. I was angry to still be alive, which looking back now is horrifying.

‘I thought I was invincible’

My mental health started to go wrong in my penultimate year at school because I had a dogmatic, tunnel-vision view of how I could work hard and get results. I became quite anti-social… I became a bit obsessive.

I was doing everything to get into the best university I could, but I didn’t get into my first choice and ended up going to Durham.

I didn’t have many friends and felt quite lost. My mistake back then was thinking I was invincible, thinking I could control everything around me. So, when things started to fall away, I started to feel like I was losing control and I very quickly spiralled.

I didn’t change anything. I just felt hard done by. I felt bitter, I felt lonely. And rather than taking the necessary steps to move forward, I became afraid of letting anyone know I had lost control.

Losing control of the plan to me was synonymous with failure. I did not want to be deemed a failure because it made me less of a man. It made me weak, it let down expectations, so I kept it all to myself.

October 2014 through to February 2016, things got steadily worse.

The mask I’d put over my own mental health started to fade because I realised deep down that I was still unhappy, and no amounts of nights out, no amounts of doing things on a regular basis would hide that.

I couldn’t sleep, I could barely eat, I felt sluggish all the time. When I did go to sleep, I’d sleep for 20 hours at a time, I’d sleep through alarms.

I was pacing up and down my room not knowing what to do next because I just wanted a bit of a break from the noise in my own head.

I did everything I could to keep it to myself and make sure nobody could figure it out, because that would make me less of a man. It was a paralysing fear of being discovered that stopped me from sharing I was even feeling remotely depressed.

‘I’m getting a puppy’

The day after my suicide attempt, I got a message from a friend saying, ‘I’m getting a puppy next week, are you in?’.

He gave me responsibility; he made my life valuable because I was now valuable to the life of another. All of a sudden, there were no suicidal thoughts, because if I was dead, he would be left for dead.

Whenever I look at him, I’m reminded of the journey I’ve been on. I’m very grateful to him.

In 2018, I was in a coffee shop in London. I opened my laptop to crack on with my day’s work and I got hit in the face with this white noise, this stress. I thought, ‘I’ve been here before’. I was falling back into a sense of depression.

I thought, ‘right, I’ll do something for [suicide prevention charity] Movember’. I wanted it to involve squatting and endurance because that was what I was good at physically.

I then committed to my first charity campaign with no intention of sharing my personal story. Within the first week I had so many messages from people saying ‘I’m so happy you’re doing this, this is something that needs to be talked about more, oh, my dad suffers with this, my brother suffers with this’.

That gave me confidence. I said I was doing it because I suffered with depression for almost two years and attempted suicide. Everybody was shocked. It was the most liberating thing I’ve ever done; sharing that story publicly freed me from the guilt, the burden, the shame that went with it.

I chucked the kitchen sink at it. Movember started giving me podcasts and I started speaking at corporate events and schools. I said ‘yes’ to everything.

Now I have my own podcast, the Modern Mind, and run a business with the focus on sharing my story, sharing the lessons I’ve learned.

In December, I reached more than £100,000 raised for mental health charities. The aim is to keep raising awareness and money and focus on getting more people involved and starting as many conversations as possible.

Scotland Tonight is on STV and the STV Player at 10.40pm on Tuesday. Anyone affected by the issues in this article can contact Samaritans on 116 123 or Movember via its website.