Our reporter's live broadcast while being battered by snow and wind provoked a big response. 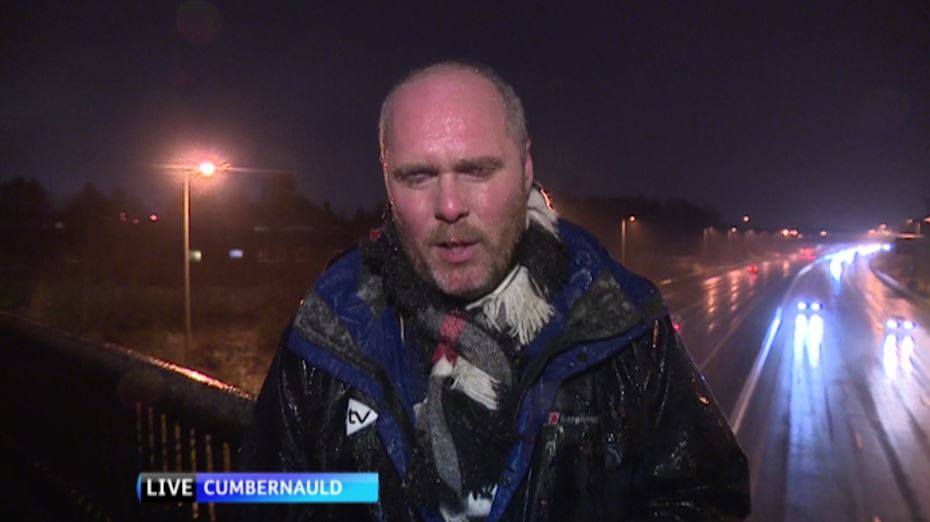 Reporting can be a dangerous job. You’re out on the road a lot, you may get sent into war zones to cover intense conflicts, you may be asked to walk up to a murderer’s house and knock on the door looking for an interview.

And if you’re really unlucky – you get sent out into a storm to report on the weather.

Producers have always delighted in sending their charges out into the elements to get a first-hand report on what’s happening. Viewers sit at home in comfort, but get to vicariously enjoy shots of giant waves crashing against the rocks as the reporter leans into the wind and hopes they don’t blow away.

It’s particularly effective during the build up and start of a storm, as the reporter is able to describe conditions first-hand to viewers and show them what they’d be up against if they choose to venture out into the world despite the weather-office warnings. And most importantly, it can make for some informative and entertaining television.

Which takes us to STV News reporter Kevin Scott’s live report from a Cumbernauld bridge on Monday evening. Standing in the dark, with the wind sending the rain sideways and into his face, he did what he could to talk about the day’s conditions.

Snowflakes were blowing into his mouth and were irritating enough that they made him cough. And once you start coughing, it’s hard to stop. He couldn’t catch his breath – but managed to choke his way through the report before heading back to the warmth of the newsroom.

The internet went wild as viewers expressed their exasperation that we sent him out in the first place, while at the same time wondering whether Scott managed to survive his time on the bridge.

“I watched that poor guy on this evening’s news trying to do a report under severe weather conditions, he could hardly speak,” one viewer wrote. “What kind of people are you at STV that would put someone through that?”

Another viewer wondered about the fashion of it all: “He was breathless and seemingly struggling to report in the horrendous weather. He had his jacket half closed only and no hood up…. are these reporters not allowed to have their hoods up or report from somewhere less open? It was distressing to watch.”

Presenter John Mackay closed the programme by letting everyone know Scott was fine. They tweeted a photo from the newsroom later that night to provide proof of life.

Should we have sent him out to the bridge? I’m of two minds.

Our job is to show as well as to tell – and you could definitely see the effects of the wind and rain on a human standing on a dark bridge at rush hour. That’s also what gives me pause – it was a weird location and didn’t really tell us that much about what was happening around the country.

We’ll definitely think twice about what we’re trying to accomplish before sending a reporter out to freeze in the rain. It needs to add to the story, not distract.

I’ll let another viewer have the last word: “Sorry STV but you are not alone, when are news reporters going to end this practice of putting reporters out in all weathers, it is not needed, get some footage to show outside and do their piece from a nice warm office. MOST PEOPLE KNOW WHAT IT IS LIKE OUTSIDE.”