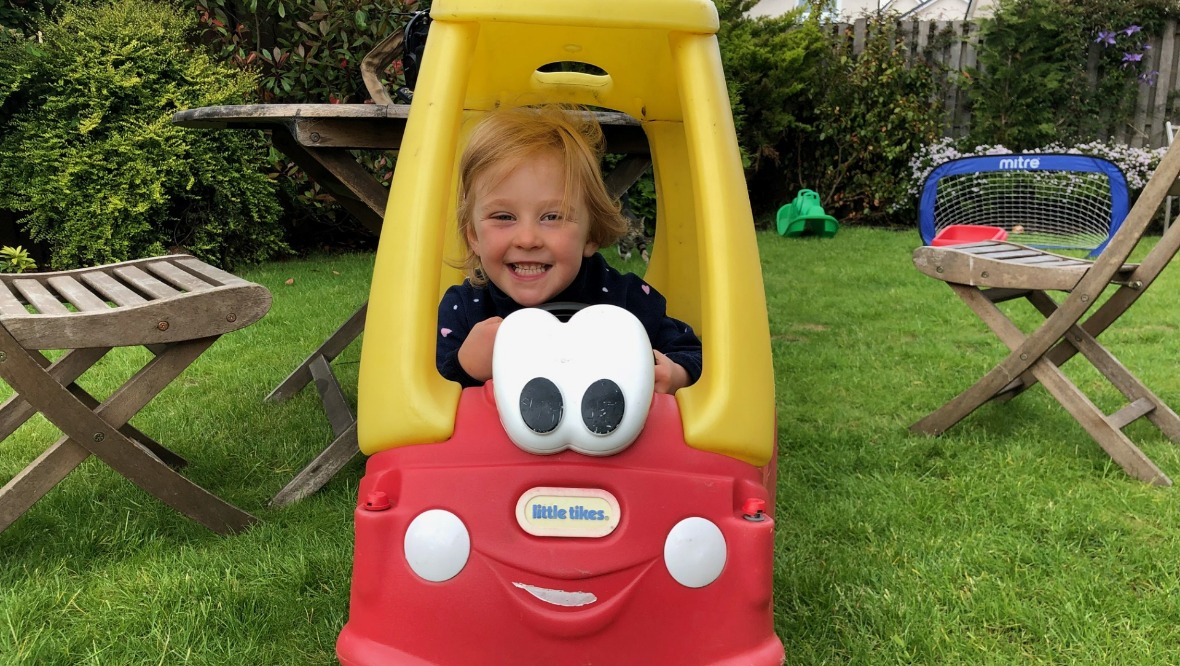 Four-year-old Emma Murdoch could start school in August, but her parents don’t think she’s ready and want her to spend another year in nursery.

They have a legal right to hold her back because she won’t be five when term starts, but their application for a funded nursery place has been rejected.

Had her birthday been in January or February, funds would be guaranteed, but for those born between August and December, like Emma, it’s up to local councils.

Emma’s parents aren’t alone – many believe forcing youngsters to start school when they’re not ready could have long-lasting and damaging effects.

Scotland Tonight – to be broadcast on STV at 7.30pm on Thursday – has been exploring the issue.

‘It’s just not worth it‘

Emma turns five in November, but mum Sarah believes sending her to school in August would damage her wellbeing.

The mum-of-three said: “Part of me would love to see it, but I don’t think it would be in her best interest.

“I’m thinking about her coming home at the end of the day and what kind of state she’ll be in, and it’s just not worth it.

“Sometimes I need to translate her speech for people – they can’t always understand her and that leads her to become frustrated – and we see lots of temper tantrums at home.

“There’s a question mark over her hearing – we’re waiting for it to be checked again, so I don’t feel I can confidently send her into school with that hanging over her head.

“We know she’s been a wee bit later to meet her developmental deadlines – if she continues to be just a wee bit on the slower side, then how is that going to affect her when she’s older, when it comes to sitting exams, transitioning to high school?”

Mrs Murdoch’s application to Stirling Council for ‘discretionary deferral’ was rejected, as was an appeal. Despite sending a 2000-word statement, she says she received “generic rejection reasons” which she found “quite offensive”.

She added: “All the reasons we’ve been given focus on how she’ll get support in school. It’s not clear that they’ve taken into account her wellbeing outside of school, which is where our concerns lie.

“I think they maybe need to demonstrate that they’re taking into account parents’ opinions, and give it maybe more weight. It’s very impersonal – the panel have never met me or my child.”

Emma does have a nursery place for the next year, but as it stands it will be up to her parents to meet the cost.

Her mum added: “We are sure of our decision, that it’s the best one for Emma to defer her.

“But with me being on maternity leave just now, we might have to reduce her hours, which is the complete opposite to what we would hope for.”

A spokesman for Stirling Council told STV that all requests were “carefully considered on an individual basis”.

He said: “This decision was made in line with council policy and the reasons were clearly set out in the letters sent to Mrs Murdoch.

“We also offered an opportunity for Mrs Murdoch to contact the service manager for Early Years and Education following the initial decision.”

From August 2023, any child who is still four at the start of the school year will be entitled to funding for an extra year of nursery.

The Scottish Government said: “This will allow families to make decisions for their children, based on what they feel is in the best interests of the child, without the financial barrier of additional costs.”

‘Kindergarten would suit all children‘

Alison Hawkins, who runs Wester Coates Nursery School in Edinburgh, believes the transition from nursery to primary is too abrupt.

She wants a major revamp of early years education and the introduction of a Scandinavian-style kindergarten stage up to the age of seven.

“To parents, I would say ‘look at your child, can your child throw a ball and have fun with you, can they catch that ball and if they can’t, why on earth is there a pencil in their hand?’,” she said.

“Can they climb upside down on a climbing frame and get an idea of their own space around them, and if they can’t then why are you expecting them to sit still?

“Schools are trying to introduce a play-based pedagogy but they’re not supported with the correct number of staff.

“Children need to be independent, they need to respond to their own motivation, not because somebody instructs them, and sadly that’s how school has been… I think it can move beyond that.”

She said: “You don’t need many resources – you need good outside places, good waterproofs and qualified staff being paid a good salary.

“If they don’t spend the money on the early years, then that money’s often needed later for mental health intervention.”

Developmental psychologist Suzanne Zeedyk agrees – she thinks “tradition” is the only reason children in Scotland start school so early.

She said: “It’s absolutely true that some children will cope fine with the system we have, but there are lots of children who don’t.

“Their self-regulatory system – which means how you manage strong, big feelings – is immature, it’s fragile.

“Experiences that you have of play, social interaction, of hanging out with friends, settling disputes – if you have time doing that earlier in life then your stress system is more robust, you’re ready to sit down and focus.”

Suzanne believes the introduction of kindergartens would take the pressure off parents who struggle to make such an important decision.

“Some councils will argue that we have enough play in P1 and P2 that we don’t need deferrals, and if that’s true that’s something we need to consider,” she said.

“The point of a kindergarten stage is that parents wouldn’t have to choose.

“We see the cost, the changes, without also seeing the opportunities, so part of this is a cultural shift about our understanding of the importance of childhood and how human development works.”