The Labrador is specially trained to help people like Jon King, who has Alzheimer’s Disease. 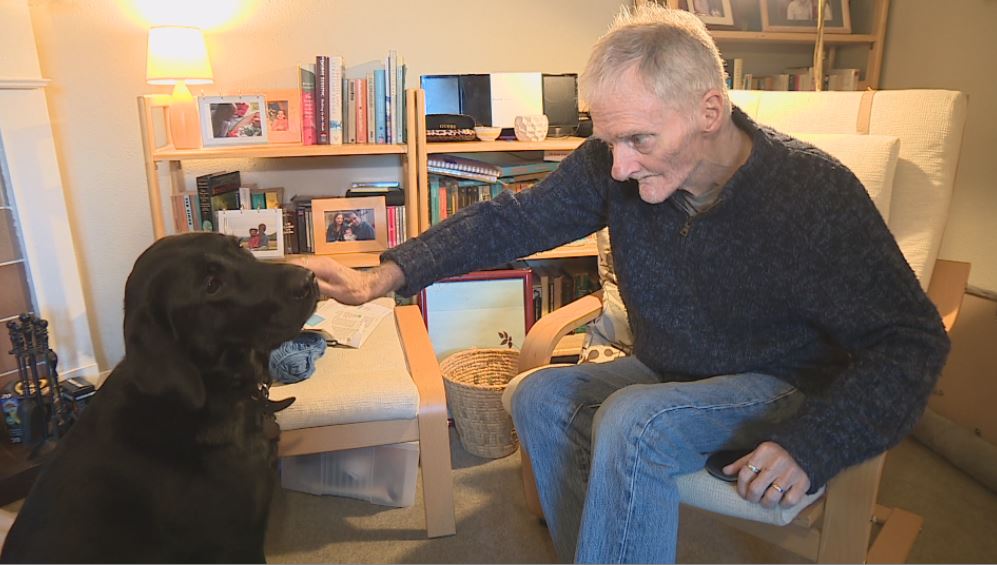 Twice a day, when the alarm sounds, Lenny the dementia dog knows it’s time to spring into action.

The four-year-old Labrador rushes to pick up a pouch containing medication for his owner Jon King.

Lenny is specially trained to help people like Jon, who has Alzheimer’s Disease and suffering from clinical depression.

Jon and his wife Jeannette say he has made a huge difference to their lives, after coming to live with them at their home in Aberdeen.

“He lifts the mood,” said Jon, 73, a retired university lecturer.

“If you’re in a bad mood and he comes in, that immediately makes you feel better.”

“Lenny is the one thing that’s guaranteed to make Jon smile,” added Jeannette.

“He’s done a lot for us, as a couple. Because it’s something new for us to share and take pleasure in.

“And you don’t often get that at our age.”

The Kings applied for Lenny after Jon was diagnosed with Alzheimer’s Disease in 2016.

He was already a dog lover, having grown up with spaniels as family pets.

Lenny is one of 11 dementia dogs in Scotland. They undergo a two-year intensive training programme, part of which is carried out by inmates at Castle Huntly open prison in Dundee.

As well as carrying out tasks for their owners, such as delivering medication and opening doors, crucially, they provide them with a sense of companionship and comfort.

‘Lenny has just opened up this whole new world, that we didn’t have before, we didn’t know about before.’

“The emotional support that every dog brings is just something that is quite immeasurable actually,” said Fiona Corner of Dementia Dogs.

“It’s probably one of the biggest benefits that our families feel.”

Jon and Jeannette say Lenny has brought a liveliness into the house.

They say he given them love, lots of laughter, and a new lease of live.

“You know it’s going to get harder and there are going to be fewer things that Jon can do.

“And Lenny has just opened up this whole new world, that we didn’t have before, we didn’t know about before.

“And that’s an extraordinary thing.”