Covid stole our jobs… so we tried something different

Pandemic has turned a comedian into a gas engineer and launched a new balloon business. 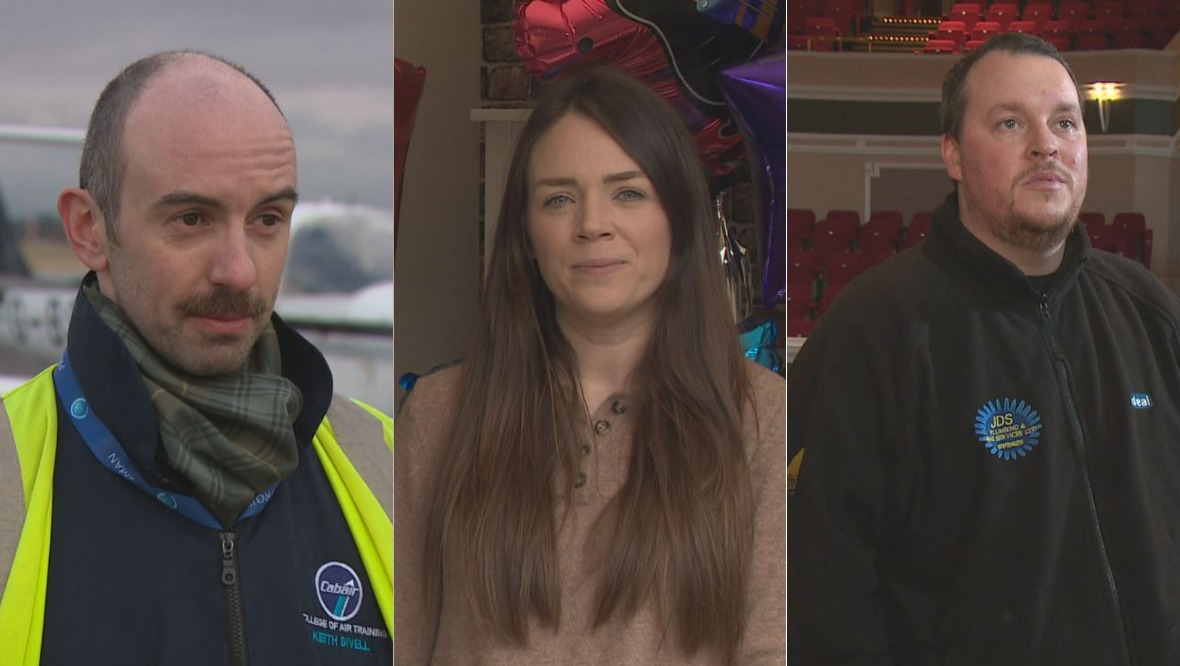 Before the pandemic, Garry Faulds was a stand-up comedian capable of selling out theatres.

Twelve months on he’s experienced homelessness and now works as a gas engineer.

They are career switches both could never have imagined pre-Covid. But they’re not alone – many people from suffering sectors have been forced to find new ways to put food on the table.

Some of them spoke to Scotland Tonight, to be broadcast on STV at 7.30pm on Thursday.

Here’s what they had to say, in their own words.

Garry Faulds: ‘I lost my flat’

My last gig was February 2020, Valentine’s day, I did 1000 seats. And that was my first proper year as a full-time comic. I had visions that I was going to buy a yacht, have dream holidays and treat the kids.

Everybody thought that gigs were going to go back within a couple of months.

I didn’t realise how bad it was going to be. And then, all of a sudden, the money just stopped because I wasn’t gigging. And I lost my flat, I couldn’t keep my flat going.

People always say you’re a pay cheque away from homelessness and I genuinely never thought I would ever become homeless.

At the very start of Covid I was helping with a charity, going out feeding the homeless, getting involved and just doing my bit to help others as anybody should. I never thought for a minute I’d be living in the same accommodation as those guys.

An academy contacted me to say ‘we would love to bless you with a gas engineer course. It’s a year’s intense course and you’ll be a fully qualified gas engineer which means you can make a living after you qualify’. I accepted that with open hands.

My now boss messaged me saying ‘I’m happy to give you a job so while you’re learning you can get experience’. He’s a great guy, it’s like going to work with your best mate.

Two years ago, my goal was to buy a yacht and now it’s to buy a van and fill it with tools. When I go back to normality, when that comes, I’m going to continue to work. It’s something that I missed. I’ve never settled since I left the army and always chased the idea of becoming a full-time comedian.

Now, I feel like the comedian Garry Faulds. I’m in a theatre, I’m getting interviewed with a camera. In an hour’s time I’m going to be crawling into somebody’s loft to pull their boiler apart. Probably covered in dirty water as well. You know what, you just take it in your stride, you just dig in, crack on.

I went off on maternity leave in June 2019 and Flora was born in July. My leave ended and I realised that my contract was not going to be extended.

All of a sudden, I was in a place where it wasn’t just one company that didn’t have jobs, it was the whole in industry. No events were taking place, nothing was happening.

I was staring into the abyss a bit, thinking ‘what am I going to do?’. I remember having a conversation with my brother and he said ‘stop trying to reinvent the wheel, find something that you’re interested in and try it’.

Flora’s birthday was coming up and I couldn’t throw a big party, so everybody starts thinking, ‘what can I do to make it more special?’.

Ordinarily I wouldn’t have the time, so I bought bits and bobs to see how I got on and watched a few YouTube videos

I was quite proud of what I did and one of my friends was like, ‘could you do one of them for my daughter’s birthday?’. That was where I thought, ‘maybe there is a market for this, maybe I can explore this’.

We’ve converted our spare bedroom into an office space. My husband is on his work calls and there I am blowing up balloons in the background.

He’s on Zoom, then I stop because a lot of the stuff he’s dealing with is quite important as he’s a solicitor. I think the balloons can be a bit of an ice breaker in the background so they’ll be like, ‘what are you building today, Paddy?’. And he’ll be like, ‘she’s building another unicorn’.

I would never have thought that I would have been building balloons but I love it.

I was a pilot for ten years – the last two as captain. It was fantastic.

I really, really enjoy flying. I’ve never lost that passion and that buzz for just getting on an aircraft and going.

The thing I miss most about flying is the actual getting up into the air, getting into the aircraft, going down the runway, launching off.

My favourite flight was Glasgow to Belfast because it’s only 21 minutes but you’re really focused for that time.

When I lost my job back in March 2020 there was a lot of concern. First week of lockdown we were meant to be moving to a new house because we were expecting our second child.

After I lost my job, a plea went out on social media by Project Wingman, which was air crew who were either redundant or furloughed, looking how we could help and go into hospital sites, setting up areas where any staff member could have a friendly conversation, a friendly face and free tea and coffee, to relieve the stress and anxiety that was caused by Covid.

Project Wingman was a real saviour for me because it gave you purpose and, before you know it, it’s five o’clock and you’re back home.

The world doesn’t need pilots just now, but it does need people to support and help the NHS.

I started working with Test and Protect in early September and the first two months was in the role of a contact tracer before I became a team lead.

The thing I like about my job the most is that real sense of responsibility. Really similar to flying as well, you’ve got a clear-cut objective.

Financially, having money coming in has also been a good factor, rather than it just going out. I think the psychological aspect of having purpose is the big factor and something that’s not to be underestimated at all.

I think I’ll look back at this time with gratitude. To be at home every single night and having family around has been fantastic.