Coping with Covid: One year since Scotland’s first case

Three families tell how coronavirus has affected their lives in different ways. 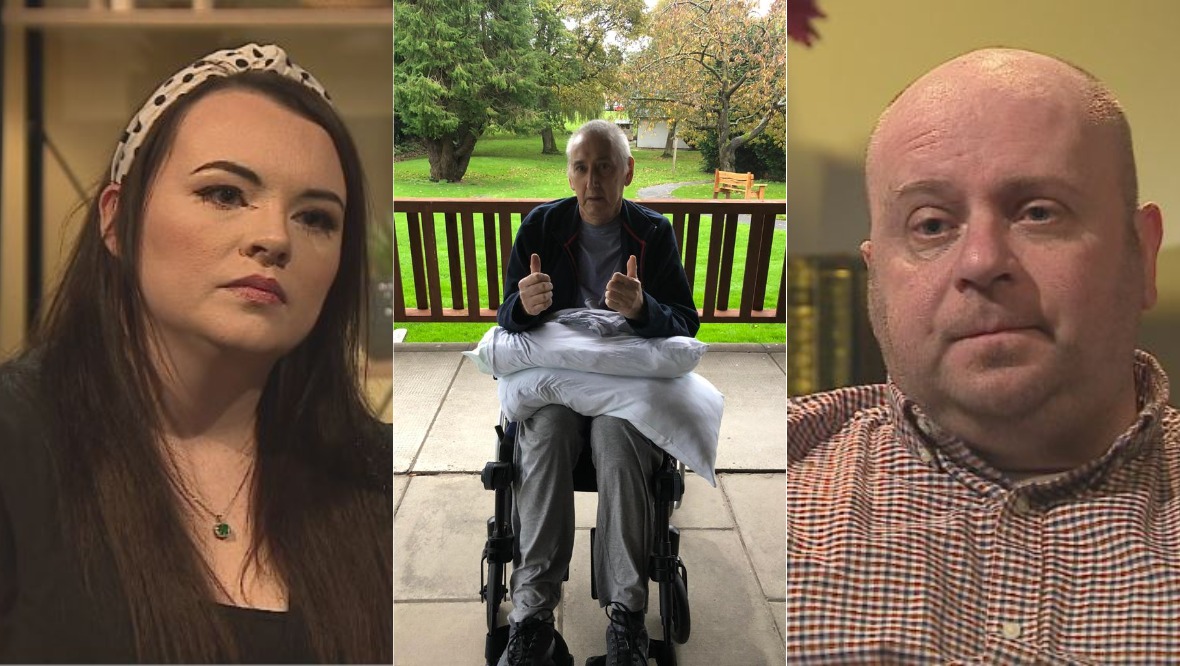 By Sharon Frew and Marelle Wilson

It’s exactly one year since the first case of Covid-19 was found in Scotland.

Since that day, the virus has claimed the lives of thousands of people.

STV News has spoken to three families, who’ve told how coronavirus has affected their lives in different ways.

Alix lost her grandad Brian Phillips to Covid-19 on January 16. He was 85 and had received his first dose of the vaccine on December 27, but tested positive on New Year’s Day.

“He was an amazing man, he would open his house to anybody. He adopted two children and when my mum found her biological brother, he called him his ‘son’ too.

“My mum has worked in addiction for over 20 years and when people had finished their stays in rehab he took them in with my gran until they got a house and got themselves back on their feet again – and that’s just who they were as people.”

Brian was living in a care home after his wife passed away in August 2019.

“After lockdown happened we were cut off from him. We did have window visits but even those were cancelled because staff members were self-isolating.

“Even though there were no cases in the care home they stopped us going to the window, which was really really difficult, especially for him because he had his mobile phone but he wasn’t good with technology or anything like that.

“So we also wrote to him a lot, but it did really affect him, and it’s awful to think that was how he spent his last year- without contact.”

The family hoped he had managed to get through the worst of it as there were no confirmed cases in his care home.

“As a family, we were just heartbroken. He didn’t really have underlying health conditions, just mild asthma, so at first, we were hopeful that he would come through.

“He was determined to pull through, he talked about it a lot, saying that he was going to be here because he couldn’t allow my mum to lose him after he lost her mum.”

Brian’s condition deteriorated and when his oxygen levels dropped he was moved to the QEUH. He seemed to get better on three occasions, but only Brian’s daughter, Alix’s mum Ruth, was allowed in to visit.

“The last time she was called in, they weren’t sure because he seemed to pick up because he got to see her. She left at five in the morning and he died ten minutes after she left.

“But also during that time we couldn’t see each other, we were all in our own family units, so there was not a lot of support except on the phone, which is just not the same. So that was really difficult as well.

“The virus robs you of the chance to not just say goodbye together but support each other and have that time after somebody dies to talk about them and share memories and even just hug your own parent when your grandparent passes away. The loss of that can’t be measured.

“I want people to realise that there are real human beings behind the statistics, people that lived great lives, people with families that loved them.

“I think more people should talk about the people who’ve been affected, There’s a lot of ordinary people who are extraordinary who deserve to be recognised.”

Stuart, 42, caught coronavirus at the end of March last year. He was in hospital for a month, initially in Wishaw then transferred to Monklands. He is still suffering from the effects almost a year on.

“I can remember the Sunday evening where I was getting put into the coma. I had a full mask put over my face and they started to count me down. I wouldn’t say I put up a fight, but I put up a struggle and I can remember one nurse very sternly saying ‘Stuart we’re trying to help you’… and after that there was nothing.

“The next thing I remember was a softly spoken doctor saying to me ‘Stuart you’re in Wishaw general hospital, you’ve just woken up, we’re taking good care of you. You’re linked up to a lot of machines. Please be calm’.”

“Over the next few hours there was a lot of thoughts going through my head. ‘How long have I been sleeping? Where’s my family?’. It was like aliens walking around me with the masks on, the suits on. It was very scary.

“There was one point I thought I had been away from my family for five years. The drugs that had gone through me… a nurse calmed me down. She told me I’d only been away for a fortnight.”

Stuart said it was very difficult to be away from his wife Sharon and his daughter Nyree.

“It was only the last three or four days before I got out that they managed to get a mobile phone into the hospital for me to Facetime my daughter.

“I had tubes coming out of the side of my neck and I didn’t want her to see me like that.”

After a month in hospital, Stuart was able to go home.

“Walking out the hospital was quite something else. Even now when we watch people coming out of the hospital, most of them are still in wheelchairs. So for me to be able to walk was quite a good thing.

“For the first month even getting a shower was a daily task. I had no energy to do anything else. It was really hard just trying to get about the house.

“It puts things into perspective for you. I would think nothing of just getting up and going to work and being away for a week or two. Now, it’s better time at home.

“My daughter has never seen as much of me. We’ve got a good relationship going now. A lot of nights I lie in bed thinking ‘imagine that wee girl being without her dad’.”

Stuart later found out that, of all the people in ICU at the same time as him, he was the only person that lived.

“That was like somebody hitting you over the back of the head. That was a lie back on the bed moment and think, ‘why me?’. And still now I think, ‘what was my purpose?’.

“I have now got three people that I know personally that haven’t made it. There are now 100,000 people out there [to have died in the UK]… and none of them have done anything wrong. They’ve just been in the wrong place at the wrong time.”

Brian Mearns, 63, spent 172 days in ICU – thought to be the longest stint of any Covid-19 patient in Scotland. He is now recovering at home but is still on oxygen and is very breathless.

“I’m not how I used to be. Tired. Short of breath. But in general… still here. That’s the main thing.

“I just want to thank everyone in the hospital that I am still here, because otherwise without them I wouldn’t be. And I’ve still got a lot to go through yet.

Brian says the virus has had not only a devastating effect on not only him but also his family.

“For them to get called in on three different occasions to say goodbye, I can’t get my head around that.

“The staff were just incredible. There was always someone’s hand to hold or a shoulder to cry on, which in the latter stages really helped. Especially with the lockdown and my family couldn’t get in to visit me, we just had to rely on Facetime.”

Brian’s road to recovery is still a long one.

“I’ve got another operation to go through for an abnormality in my bladder. I can’t have a general anaesthetic, I’ve got to get a spinal because of the lung damage, they don’t want to risk it.

“It’s great to be home. We had a home visit two weeks before I got home, I didn’t want to leave. It was something special coming home.”

“It’s just been an absolute nightmare,” she says. “The worst year ever. I don’t think anything will ever come close to as bad as that last year has been.”

“Never at any point did we think that dad would end up as ill as he did. We never thought that we might have lost him.

“To go to his bedside… to essentially say goodbye to him… it was horrible. Each time we went in to see him he then fought and began to pick up quite quickly again. He would improve, then something else would happen and he would be back to square one again.

“It’s a miracle that he’s still here. And I think it shows his determination to stay with us, and the determination of the staff not to let him go.”