Mares from Collessie Clydesdales in Fife have been undergoing treatment at a St Andrews clinic.

At the turn of the 20th century, Clydesdale horses were considered a key tool of the workforce.

Their population was booming with more than two million working heavy horses.

Now, decades later they are on the rare breeds list with numbers at just 10,000.

However there is hope the future of the iconic breed could be saved through science.

The first successful embryonic transfer foal was born on June 13.

She said: “It’s something more commonly used in sport horses, but it can be used in any breed where you want to preserve the genetic line.

“The process has all to do with timing, once the mare whose genes you want to keep has conceived, you wait a week and then flush the embryo out.

“The embryo is then transferred into another mare who will carry the foal for 11 months until it’s born.

“Clydesdales don’t have great fertility anyway so the fact this process has worked is a big deal for the breed.

“We believe it’s a first in Scotland.” 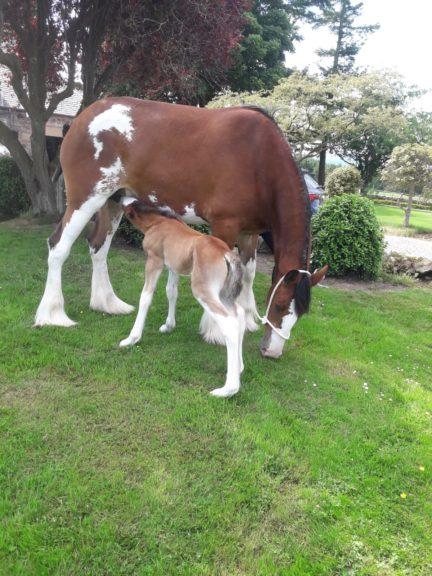 The embryo was taken from Royal Highland Show winner Collessie Jennifer who’s had trouble carrying foals in the past.

Her owner Ronnie Black, who owns Collessie Clydesdales in Fife said: “She’s a really above average horse so we thought we’d try the embryo transfer.

“It means she can continue on her work and we can get her good genes without having the stress of carrying a foal.”

Selena has helped another one of Ronnie’s Clydesdales through embryo transfer, which is expecting a foal next spring.

She said: “It’s a long time to wait to see if it’s been successful, I don’t think breeding horses is for the faint hearted!”

“We hope it continues to work because it will help keep the Clydesdale breed going.”