Childminders fight to survive with no access to key support fund

Many childminders have had to dig deep into their own pockets to adapt their homes during the coronavirus pandemic. 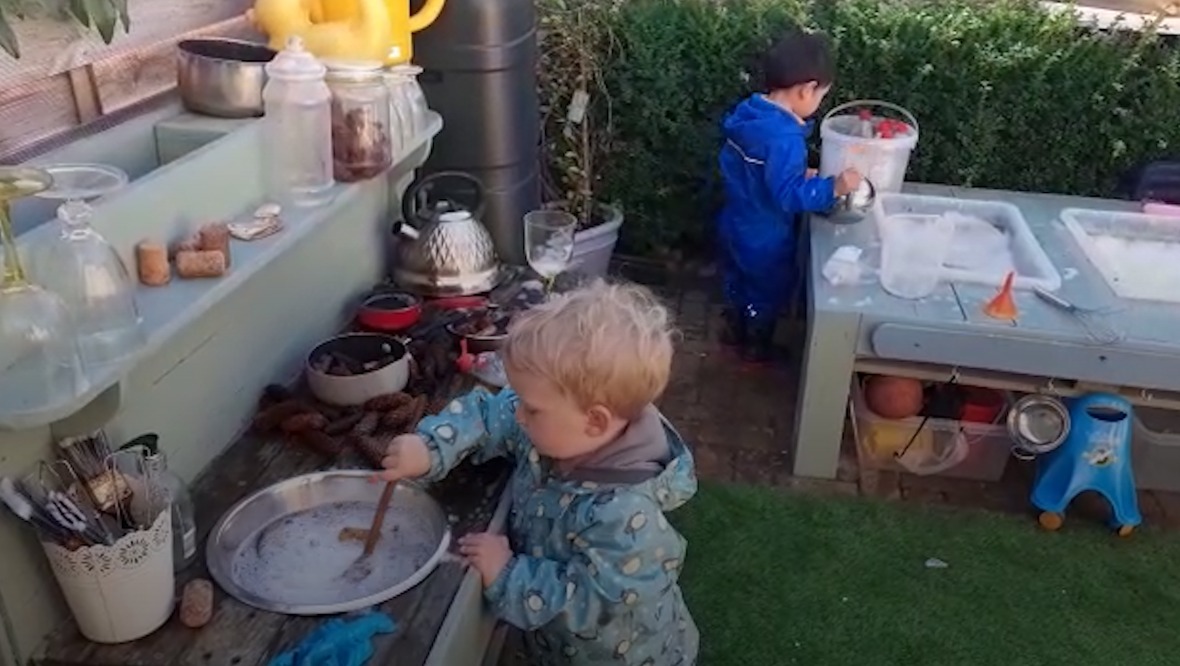 In the depths of the first national lockdown, parents across the country were thrown a challenge few imagined possible at the turn of the year – how to provide childcare during a pandemic.

The doors were slammed shut at schools, nurseries and children’s centres all over Scotland.

But the nation’s army of 4500 registered childminders kept their doors open, caring for the needs of the children of key workers on the frontline in the fight against Covid-19.

Childminders, however, have been excluded from being able to apply for the funding, forcing many to dig deep into their own pockets to ensure their childcare settings are compliant with new regulations.

Angie Harrison, a childminder in Dunfermline, Fife, says she has already used up most of her savings in order to keep her business afloat during the national lockdown earlier this year.

“We’re the only childcare sector in Scotland to be excluded from this fund. It’s completely unfair, it’s inequality.”

She said: “We’re the only childcare sector in Scotland to be excluded from this fund. It’s completely unfair, it’s inequality.”

Angie says she’s concerned that parents could overlook childminders and put their children into nurseries or another childcare provision that has used funds to make their premises more Covid-secure.

She said: “If we’re not included in the Transitional Fund how are we to enhance our play areas and provide our families that we care for – and their children – Covid-secure outdoor premises when everyone else is entitled to it. It’s discrimination.

“We have government guidelines to follow and that includes staying outside for longer periods of time with the children, eating outdoors with the children, playing maybe in a sheltered area for all weathers outdoors to keep the environment Covid-secure.

“I’ve used most of my savings already to survive coronavirus when we were in lockdown because I only charge £4 an hour and – if I can only care for one or two children – it’s below minimum wage that I’m actually working for.”

Angie says around 25% of registered childminders in Scotland haven’t reopened since March.

“As a childminder, I stepped up when the Scottish Government asked us to open our doors and our homes to NHS staff, shop workers, bus drivers and train drivers,” she said.

“We need to be included in the Transitional Fund or we need to have a comparable offer to us as a separate fund because there’s no reason childminders should be asked to step up during a pandemic and then shoved aside when it’s finished.

“I really hope that Nicola Sturgeon and the Scottish Government listen to what we’re saying because if they have to lock Scotland down again they’re going to find themselves very, very short on childminders willing to open their doors to help this time round because we’ve been treated appallingly.”

The Scottish Childminding Association (SCMA) says almost half of all professional childminding businesses in Scotland are on the edge of financial viability and require further financial support from the Scottish Government.

Almost 900 childminders responded to a snapshot SCMA survey, which shows that 46% of childminding businesses do not believe they will still be financially viable in six months’ time without financial support or an increase in business –  and 28% have had to run up debt on credit cards to supplement their income.

Graeme McAlister, CEO of the Scottish Childminding Association, said: “The demand for childcare has reduced dramatically – in some cases as much as by 50%, primarily as a result of the official guidance that parents should work from home where possible and that’s difficult to sustain over the longer term.

“Almost half of childminders in Scotland believe their businesses will only be viable for between another three or six months without financial support.”

“So what we’ve found is that almost half of childminders in Scotland believe their businesses will only be viable for between another three or six months without financial support.”

Mr McAlister says there is a mistaken belief that childminders are not incurring additional costs during the pandemic as many have had to make physical adjustments to their settings.

He said: “We have obtained evidence that shows many childminders – almost 60%, have experienced as much as a 20% increase in their costs, sometimes more.

“And also beyond that, most childminders are solo workers and are working many additional hours each week unpaid on top of that.

“The Scottish Government has unfortunately got this wrong and we believe they should be putting it right.”

On the west coast of Scotland, Karen Santana runs a childminding service with her husband Francisco in Dunoon, Argyll and Bute.

They stayed open to support frontline staff throughout lockdown while local nurseries were closed.

Karen and Francisco have now had to sell the family car in order to pay the rent and energy bills.

“This whole situation has had a terrible effect on my mental health and I feel disheartened and let down by everyone.”

She said: “This is extremely upsetting for myself and my husband as we have been treated unfairly, and now being excluded from the Transitional Fund puts our own family and the children we care for at a higher risk of spreading the coronavirus as we don’t have the funds to provide adequate outdoor resources.

“This whole situation has had a terrible effect on my mental health and I feel disheartened and let down by everyone.

“At the time of lockdown, we could have closed our service completely to keep our own boys and ourselves safe. But we didn’t. We stayed open to support frontline staff to enable them to continue working.

“If we hadn’t stayed open, some of the families wouldn’t have had any childcare at all and at £4 an hour per child, it’s not as if we were making any profit at all, in fact we worked seven weeks at a loss.

“We have been excluded from every type of funding from the government, including the discretionary grant from the local council, because we work from home.”

“We are deeply grateful to everyone in the childcare sector, including childminders, who have supported key worker families and vulnerable children during the health crisis, and recognise that lockdown has hit incomes in many areas.”

The Scottish Government says the Transitional Support Fund is not designed to cover lost income, adding it is to support day care of children settings to adapt to the specific reopening guidance for these settings, and accommodate additional costs incurred such as modification of premises and supporting staff to physically distance.

A Scottish Government spokesperson said: “We are deeply grateful to everyone in the childcare sector, including childminders, who have supported key worker families and vulnerable children during the health crisis, and recognise that lockdown has hit incomes in many areas.

“That is why, in addition to a range of financial support open to childminders such as the Self Employed Income Support Scheme or the Newly Self-Employed Hardship Fund, the Scottish Government and local authorities continued payments for the statutory early learning and childcare entitlement for the duration of closures, regardless of whether providers were open or closed.

“In June, we also agreed with the Scottish Childminding Association to jointly fund the Childminding Workforce Support Fund to provide grants to childminders who have struggled to access support through other routes and, following additional funding announced in September, the Scottish Government’s support for this now totals £420,000.

“This remains a time of unprecedented challenge, and there are significant demands and pressures on the government to support businesses and people all across Scotland who are being impacted by the pandemic and the necessary public health response.

“We remain committed to working with the whole childcare sector to respond to the continued need to follow public health guidance while progressing the recovery.”