Brothers get the Tartan Army dancing in their seats 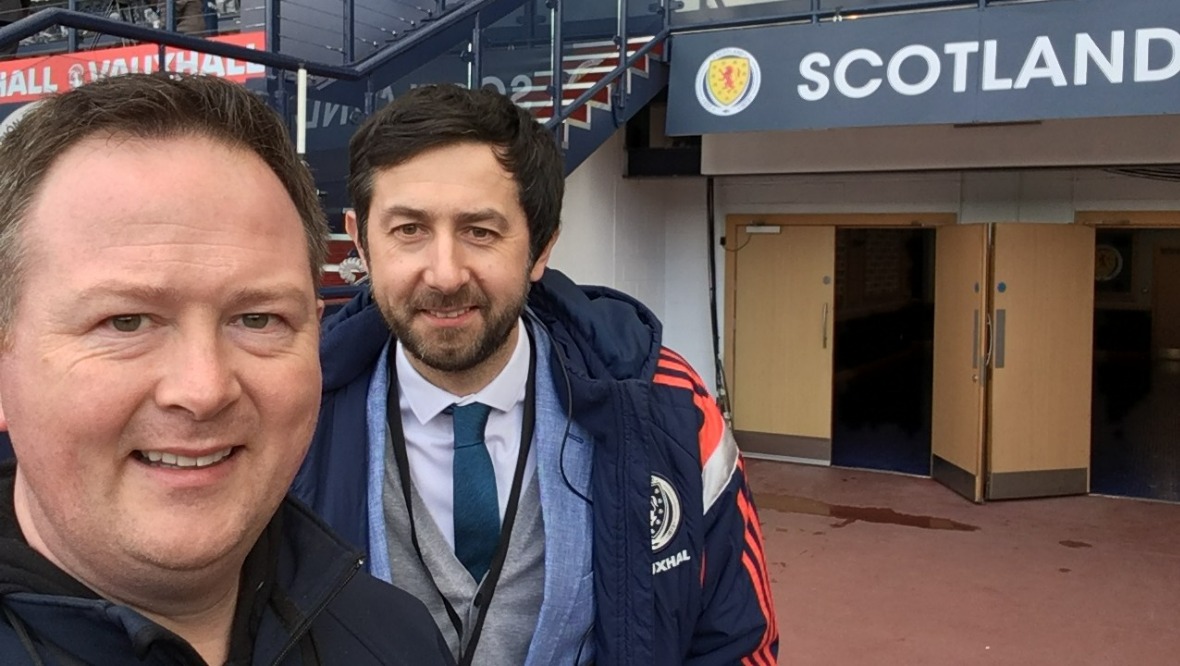 They are the brothers who help give the Hampden Roar an extra oomph.

But since the coronavirus crisis, DJ Keith Easton and his stadium announcer brother Graeme have been playing to empty stands.

After starting out as a mobile disco back in 1990, the entertainment duo have been calling Scotland internationals and cup finals since 2008 – including every big match played behind closed doors since last year.

It will be 20 months since the Tartan Army last marched into Hampden when they finally return for Scotland’s Euro 2020 group opener against the Czech Republic on Monday, June 14.

And the Easton brothers, who run Woosh Entertainments and ensure the music, big screens and public announcements go without a hitch, cannot wait to feel that matchday buzz again.

Here, the Hampden showrunners give STV a lowdown on the tunes that get the Scotland fans bouncing for the big games.

And you can listen to Keith and Graeme’s full Tartan Army playlist on Spotify here.

The 1977 disco classic became the unlikely soundtrack to Scotland’s qualification success when it was played by the squad in the dressing room after their penalty-kick triumph over Serbia in Belgrade.

The players use it as an ode to cult Aberdeen defender Andrew Considine, who was filmed dancing to the track on his stag party in a video which then went viral.

“I don’t think people would forgive me if I didn’t put ‘Yes Sir, I Can Boogie’ on there,” said Keith. “It is fascinating that it has become what it has.”

Franz Ferdinand – ‘Take Me Out’

A regular track around the grounds of Scottish football, the 2004 hit single by Glasgow’s Franz Ferdinand has all the ingredients to get the crowd whipped up pre-match.

Graeme said: “I think it’s an absolute anthem. It builds up at the beginning and is a great song for when the fans are coming in. It will get them going before kick off.”

The singalong anthem has been belted out everywhere from football games to weddings to house parties across Scotland since 1987 and is a firm Hampden favourite.

“It was voted Scotland’s favourite song recently,” said Keith. “It is a modern-day Scottish folk song and I would definitely have it in there.”

Is it even a Scotland match if you don’t hear ‘Loch Lomond’ at least once?

“It always goes down well and I think if we didn’t play this we’d be in trouble,” said Keith. “I always think it’s good to have on at half-time even if we are getting beaten because it gets the fans back engaged.”

“I think the whole of Scotland would want this one on at Hampden,” said Graeme. “It would be a sin not to play that at a home Scotland game!

“If and when Scotland win against the Czech Republic or Croatia I think we would have to put it on.”