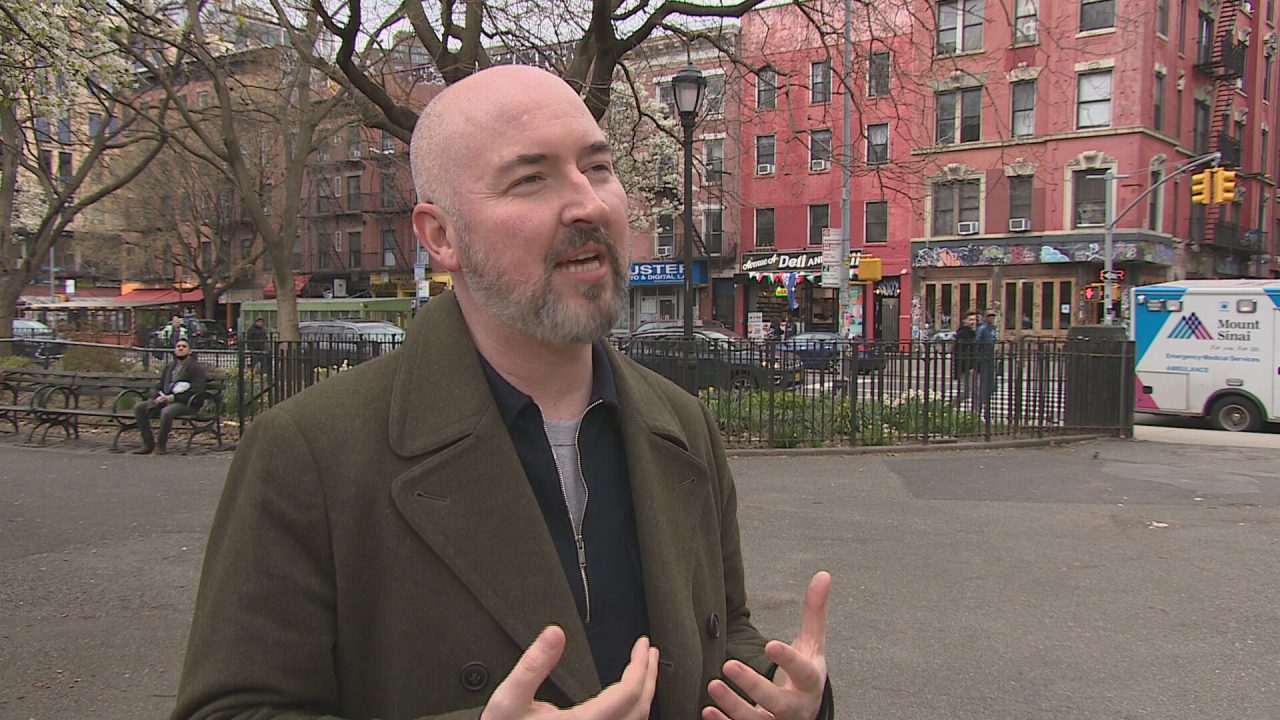 His debut novel won him a Booker prize and sold millions of copies worldwide, but Scottish author Douglas Stuart says he’s “always struggling with imposter syndrome” and “dying” to move back to Scotland.

We caught up with the Glasgow-born writer in New York City’s trendy East Village in Lower Manhattan, where he has lived for the last 20 years.

The Scot enjoyed a glittering career in fashion before the success of Shuggie Bain took the world by storm.

“I came to live here by accident,” he told STV News. “I thought I would be here for a year or two and before you know it all this time has passed.

“But I still live in a tenement flat, I’m still up a close with neighbours, ” he joked.

His debut novel Shuggie Bain tells the story of a child’s attempts to care for his alcoholic mother Agnes in the rundown schemes of Glasgow during the 1980s.

The book also sees the protagonist come to terms with his own sexuality, knowing deep down he “was not like other boys.”

Stuart insists that Shuggie Bain is not autobiographical, but acknowledges aspects and characters in it are reflective of his own childhood – growing up gay in working class Glasgow, and his relationship with his mother, who he lost to addiction when he was 16.

“Agnes Bain is not my mother, but she is all the highs and lows, she reflects a lot of the strength and the troubles of the women I grew up around.” he said.

“The bravery, the glamour, the resilience, and also the pain and hurt.”

The novel took ten years to write and was initially rejected by publishers for being “too Scottish and niche,”

However the success of Shuggie Bain has allowed Stuart to write full time, and has firmly cemented his place in the literary world and helped him connect him to his Glasgow roots,

“It’s changed my life, my career. But it’s also called me home again. It’s allowed me to express things I was keeping very quiet and very silent for almost my entire life,” Stuart said.

“It’s allowed me to look at some difficult things in my childhood, some loss, grief, addiction that I grew up with and allowed me to confront it and to make more sense of it.”

Despite Stuart saying the pressure to follow up the success of Shuggie was “extreme,” his second novel Young Mungo is every bit as captivating, vivid and heart wrenching as Shuggie Bain.

It depicts a suspenseful and dangerous love affair between two young men, Mungo and James, growing up in working-class Glasgow.

It explores the violence queer people faced in the 80s and draws on Stuart’s real-life experience of being attacked in Pollok when he was 16.

“That attack really changed everything about my life,” he said.

“It left me with an awful lot of fear, and it left me not feeling like I wanted to go outside, and a lot of trauma.

“I wanted to look at that violence in this new novel, and imagine the love and companionship that I never had as a young gay guy growing up in Glasgow.

“The main character Mungo looks out of his tenement window and he meets another boy and it’s almost a bit like Romeo and Juliet.”

Stuart believes the Glasgow depicted in his novels for young gay men is worlds away from how the city is perceived now.

“What I love most is when you see the best lists of ‘best places to be gay’ now and Edinburgh and Glasgow are top for global rankings,” he added.

Shuggie Bain is being turned into a limited eight-part series and Stuart has started work on his third book.

“My teachers at school were phenomenal, but coming back around to literature is about answering dreams that were unfulfilled, but it feels suddenly I’m in the place that I’m always meant to be,” he said.

Young Mungo is released on Thursday by Pan Macmillan.