The pair were given a guided tour of designer Stella McCartney's sustainable fashion exhibit at the conference. 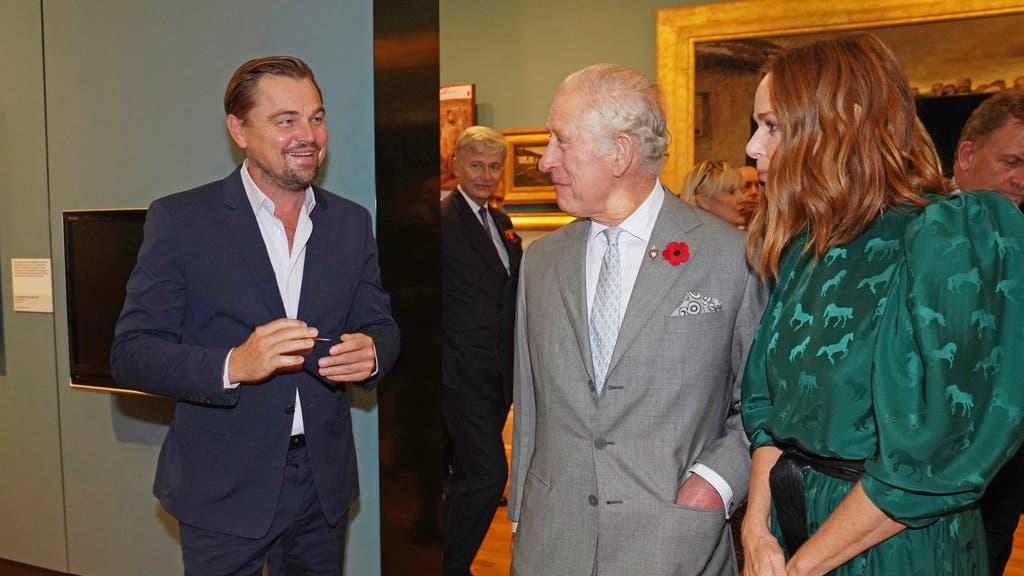 McCartney said the celebrity appeared “gobsmacked” more designers were not “joining forces” with her push for sustainability and ditching leather for eco-friendly materials.

DiCaprio chatted privately with Charles after they were separately given a guided tour by the designer of her innovative sustainable garments and accessories dubbed the “Future of Fashion”.

The actor’s appearance at COP26 caused a buzz around the UN climate conference in Glasgow when rumours surfaced on Tuesday that he was attending, and the actor was finally spotted.

He is a climate change campaigner, working on a number of documentaries about animal poaching and the environment, and was appointed a United Nations representative on climate change in 2014.

He left the main hall where the exhibition was staged before Charles arrived and after the prince viewed the items he was introduced to the film star in a quiet area of the gallery.

The celebrity quickly pulled off his face mask and shook hands with the royal who has spent the first few days of COP26 in a whirlwind of speeches and meetings with everyone from Amazon founder Jeff Bezos to US President Joe Biden.

The actor was a guest of McCartney’s and the trio spoke together for around ten minutes before Charles left and the designer joined a live discussion with industry experts about stopping the use of animal leather and fur.

Before taking her seat on stage, the designer said Charles found her exhibition “enlightening and inspiring”.

She added: “I want to highlight my industry and call it out, we’re one of the most harmful industries in the world to the environment and what I’m doing here is trying to provide sustainable solutions and technologies and a better way of doing things.”

Commenting about DiCaprio’s reaction she added: “He’s just like ‘I can’t believe you’re the only person in fashion doing this’ and I think he’s a bit gobsmacked I don’t have more colleagues joining forces with me.”